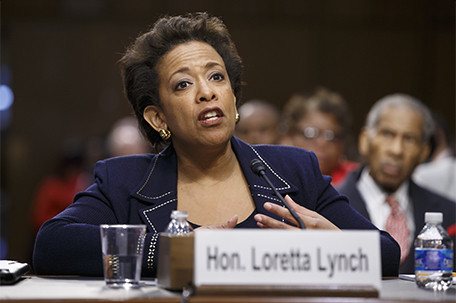 In the days immediately before Loretta Lynch’s confirmation as Attorney General, one of her advisors noted that she felt that law enforcement is good for minority communities. He went further and said that she feels strongly that police and minority communities have much more in common than differences. This is probably an accurate read on Lynch’s feeling about police-minority community relations. Now her feelings and belief are going to be sorely tested with the Baltimore turmoil.

It began the instant that an unarmed, non-resisting Freddie Gray died after a fatal spinal cord injury sustained during his arrest by Baltimore police. This touched off days of protests, some violence, and frantic efforts by Baltimore’s hard pressed black police commissioner and mayor to get a handle on the turmoil. It didn’t take long for civil rights leaders to make the now inevitable call for a full Justice Department probe into Gray’s death. It agreed. This shoved the ball into Lynch’s court. The likelihood is that it won’t leave there despite Baltimore city officials bringing charges against the six officer’s involved in Gray’s death.

It also won’t address the bigger issue that Lynch almost certainly will have to deal with if not in Baltimore sooner than later somewhere else. That’s the overuse of excessive force by police and what the feds should do about it.

Former Attorney General Eric Holder took much heat on this from conservatives who screamed that he should be hands off on all police abuse issues. This was a matter solely for local authorities, they said. Holder also took much heat from some civil rights activists who screamed that the Justice Department should step in hard with probes and indictments in police abuse cases. Both sides were even more troubled when Holder’s Justice Department issued a scathing report on the blatant corruption and serial misconduct of the Ferguson police department in the aftermath of the slaying by former Ferguson officer Darren Wilson of Michael Brown, but let Wilson off the hook by finding there was no grounds to indict him on civil rights charges. The issue of just how far the Justice Department could and should go in these cases was left dangling when Holder left.

So what will Lynch do in Baltimore and beyond? She’ll have to look at the Baltimore case and decide whether there’s any “compelling federal interest” in a prosecution of them, namely that the government believes that the officer’s conduct constitutes a federal offense, and that there is enough evidence that the government can obtain a conviction.

There’s the strong suspicion that Gray’s death was caused by his physical manhandling by police during the arrest. And while there was no apparent racial motive in their confronting and arresting Gray that is not a hard and fast requirement for a civil rights prosecution. The issue is whether a civilian or a suspect’s rights were violated. The safeguard of that right must be a fundamental concern of federal prosecutors.

The Gray case, as in other cases involving police use of deadly force against mostly unarmed blacks, again raises the deeply troubling question about the power of the law to protect citizen from his or her unimpeded right to life and safety. Federal prosecutors play a major role in insuring that where there’s the suspicion that an individual’s rights might have been violated because of their race and gender that the power of federal law is brought to bear to insure that right is protected.

This was the rationale that federal prosecutors used in the Rodney King beating case to bring civil rights charge against the four LAPD officers that beat King. The linchpin was that they acted in an official capacity when they violated King’s rights.

The Justice Department scrupulously tries to avoid the prosecution of a police officer. It goes to great lengths to shield itself from the charge that it’s bowing to media or public pressure to prosecute. This is why the percentage of civil rights prosecutions it authorizes is infinitesimally low. Yet in Gray’s death, there may well be crucial federal interests in insuring the rights of individuals to be free from undue harm because of their color, or being in a public area merely because someone perceives they shouldn’t be in and then acts on that perception with no cause other than that belief or perception.

The other option is for Lynch to follow Holder’s lead and aggressively institute a pattern and practice action against Baltimore. That means aggressively monitoring the policies and practices of the department in relation to policing in minority communities. Holder also took heat for this from the right. But it had to be done. Baltimore has given Lynch her first chance to weigh in handily on the nation’s most intractable and deadly issue. That’s the wanton police slaying of unarmed blacks.

Baltimore is her first big test.