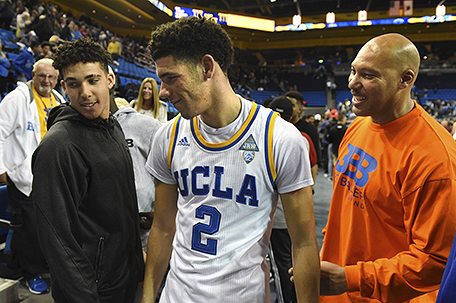 The detention of LiAngelo Ball and his two UCLA basketball teammates and Trump’s touting of his role in getting them released dominated the news cycle for days.

But there is another issue that their detention quietly, but just as troublesomely, rammed to the surface; the issue of just what makes a good or bad Black father. Yes, Black father, because no issue in the fierce debates over good and bad parenting has been stuffed with more myth, distortions and outright lies than the issue of the Black family. This inevitably zeroes in on Black fathers.

The litany of knocks against Black fathers are legion. They are seen as chronically absent, derelict, imprisoned, drug, alcohol abusers, and prone to domestic violence. The astronomical number of fractured black families without a father in the home is well-known and has been the constant source of packs of studies, reports, surveys and tongue lashing by much of the media, academics and especially conservatives who delight in blaming the absentee black father for every economic and social ill that plagues the Black communitiy.

Now there’s Ball. With the China flap, he was plopped at the center of the latest go round of scrutiny of the role of black fathers. He has had lots of defenders, and they were there long before he refused to say “thank you” to Trump for playing any role in getting his son released. He’s been praised and admired by his defenders for being a strong, protective and diligent nurturer, protector, developer and commercial enricher of his son’s basketball careers. He has taken on every comer who dares denigrate, detract or cast any dispersions on his sons and family. He has done all this while caring for an ailing wife. This is exactly what a strong Black father, and Black male figure, should do, according to traditional American family convention. He is a living, breathing, walking refutation of the ancient stereotypes about alleged inherently irresponsible Black men and Black fathers.

But thats not all you get with him. When Ball snubbed Trump for demanding thanks for intervening for his son and the other two UCLA ball players, the howls were deafening from the Ball bashers. He was branded an embarrassment and a disgrace to the simple rules of courtesy and gratitude. This touched a strong undercurrent in some circles of loathing of everything about him as a Black father. He is brash, loud, obnoxious, a shameless media self-promoter and commercial scamster. The ultimate dig is that if his son thought that he could blithely waltze into several stores and pilfer some items without any thought of the consequence, don’t blame young Ball. Blame the father for drilling into him a sense of entitlement. This confirmed for the critics that he was not only a bad guy but a bad father, a bad Black father. The worst part of this is that Black men, when they commit rotten acts, are not judged as individuals, but as every Black man. Ball, then, almost by default became the platinum standard for bad behaving Black men.

That’s a lot to dump on the shoulders of Ball. After all, he didn’t make the rules of racial engagement in America. However, for better or mostly worse, he can’t escape those rules. So, what is it? Is he a good or bad black father? And what does this little drama of his time on the public stage say for Black fathers? The truth is that Ball is no different than many other fathers, that’s White fathers. He’s both protective and nurturing overbearing and boorish. His whip lashing his sons to be the best at their sport is hailed. Yet, if that means turning them into prima donnas who think the rules are made for everyone but them because they are special, he is condemned. The label then of a good or bad Black father then is almost meaningless in that context since in a patriarchal society men define the roles and the rules of family. And what’s boorish can also be considered caring.

Ball, as many men do, blurs the line between the good and bad when he repeatedly fends off all criticism of his parenting ways with his sons. His blunt retort is that he simply wants and knows what’s best for his sons and family. He’s been lambasted as bullheaded and as an opportunist every time. However, the brutal reality is that he can make that claim precisely because he has been a dominating presence in his family. In the process, he’s made himself a dominating presence in the media and public discourse on the merits of fatherhood.

Ball will be remembered in wide circles mostly for the tit-for-tat that he had with Trump over who did what for his son and the UCLA players in China. But long before that he was remembered for being the Black father who made his sons famous. Unfortunately, this came with the addendum, but at what price for he, them, and Black fathers.

Earl Ofari Hutchinson is an author and political analyst. His latest book is, The impeachment of President Trump? (Amazon Kindle). He is a weekly co-host of the Al Sharpton Show on Radio One. He is the host of the weekly Hutchinson Report on KPFK 90.7 FM Los Angeles and the Pacifica Network.