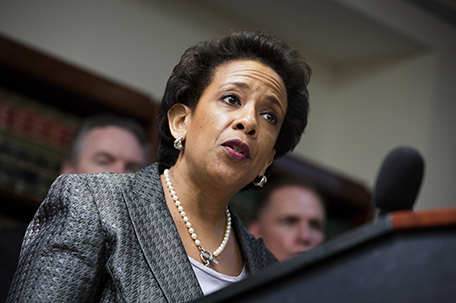 Thank you, Beth McGarry, for that very kind introduction, for your exemplary leadership at the Office of Justice Programs and for your steadfast commitment to preventing youth violence and improving public safety.  I also want to thank Karol Mason, our outstanding Assistant Attorney General for the Office of Justice programs.  The work that OJP does each and every day – strengthening partnerships with state, local and tribal justice officials; ensuring a focus on evidence-based approaches; and funding innovative and groundbreaking projects – is a vital part of our nation’s effort to build the more just society that all Americans deserve.  And I also want to take just a moment to acknowledge Dr. William Bell, President of the Casey Family Programs, for his longstanding commitment to this very important issue.

It is an honor to be here with you all this morning – and a pleasure to join so many devoted public servants, engaged private partners and passionate civic leaders as we rededicate ourselves to the safety and security of our nation’s children and youth.  I want to acknowledge, in particular, the young people who are with us today – and to thank you for your activism and your advocacy on this compelling issue.  As we’ve seen from recent events, preventing violence in our communities is not an abstract concept, but a clear and pressing need.  It is a need that requires more than a prosecution strategy – but rather an approach that sees all sides of this challenging issue.  Healing our neighborhoods, building mutual trust and promoting well-being are not lofty or unreachable goals; they are tangible pieces of the more prosperous and more peaceful society that we all seek.

Last week I traveled to Baltimore – in my first trip as Attorney General – to meet with public officials, law enforcement officers and community representatives.  I spoke to women and men who had taken to the streets after the unrest to clean up trash and debris, and police officers who had worked 16 days without a break and were concerned not for their own security, but for the safety of their residents.  But I think I was most impressed with the young people I met with in Baltimore – about nine of them who are working within their community and with their peers to make their city a better place for everyone.  A few seemed to have read more about civil rights law than many lawyers I know.  And they were optimistic – even in the midst of great challenge – about the future of their city. 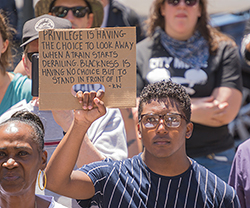 PHOTO:  Man holding sign during march against the death of Freddie Gray, a man of Baltimore who was seriously injured in police custody.  (betto rodrigues / Shutterstock.com; Los Angeles, CA, USA)

They are a testament to the strength of our young people – even those who live in tough neighborhoods and face real economic challenges.  They are making a real and positive difference and serving as an example to others.  And I told them that I hoped they would challenge their peers to do the same, because in many communities in Baltimore and in communities across America, it is all too easy for our youth to get caught up in drugs, gangs and violence and give in to a troubling status quo.

It is a distressing reality that not just a sizable minority, but a significant majority of America’s children – more than 60 percent – have been exposed to crime, violence and abuse, either as victims or as witnesses.  This violence can take many forms and can occur virtually anywhere – from the streets of our neighborhoods to the far reaches of cyberspace; from the schools where our children learn their earliest lessons, to the homes where they should feel most secure.  And it is clear that, regardless of how or when it occurs, exposure to violence can have real and devastating consequences for growth and development.  Research has shown that, whether children observe violence directed at others or become victims of abuse themselves, exposure to such behavior will make them more likely to fall behind in school; more likely to suffer from anxiety and depression; more likely to struggle with drug or alcohol abuse later in life; and ultimately, more likely to perpetuate the cycle of violence in what Dr. Martin Luther King called “a descending spiral of destruction.”

That’s why summits like this one are so important.  It’s why the work you’re doing to rally local stakeholders to improve law enforcement, increase support for violence prevention efforts and expand access to family and social services – is so critical.  And it’s why the Obama Administration – led, in part, by this Justice Department – has dedicated itself to these efforts, making an unprecedented commitment to this critical issue.

At the heart of this commitment is our National Forum on Youth Violence Prevention, representing a network of 15 communities and federal agencies that work together, share information, and build local capacity.  These communities – from Boston to San Jose and from Seattle to Baltimore – use prevention, intervention, enforcement and reentry strategies to stop violence and spur progress.  Through their innovative and collaborative efforts, we have already seen homicides and juvenile violent crime drop in nine out of the 10 cities that participated during 2014 – and some cities even reported changes in quality-of-life measures like increased school retention and better police practices.  The National Forum’s success has been complemented by the Community-Based Violence Prevention Program, which currently operates in 16 cities nationwide, targeting youth gang and gun violence by  building partnerships among law enforcement, service providers, concerned residents and community- and faith-based organizations.  After implementing the evidenced-based deterrence and public health practices recommended by this Violence Prevention Program, cities reported reductions in gun violence and increases in community engagement.  Outstanding efforts like these are not only noteworthy – they are replicable and we are striving to bring them to more cities across the country.

Beyond these efforts, we’re supporting evidence-based interventions for children, expanding our base of knowledge and developing comprehensive strategies under our Defending Childhood Initiative, led by OJJDP and the Office of Justice Programs.  We’re working with partners in the private sector and across the federal government – including Secretary of Education Arne Duncan and Secretary of Labor Tom Perez – to end the school-to-prison pipeline that sends too many children on a well-worn path from the schoolhouse to the jailhouse.  And we are standing up and speaking out against so-called “zero tolerance” school discipline policies that bar the doors of opportunity for children who need support, leaving them stigmatized and marginalized, left out and left alone.

As many of you know, some communities are particularly vulnerable and require a special, targeted effort.  Through the Task Force on American Indian and Alaska Native Children Exposed to Violence, we have worked with leaders in tribal communities to bring down alarmingly high rates of violence, drug abuse, alcoholism and suicide – and to develop fresh, data-driven strategies to address those problems together.  Under an array of programs to reach the more than 100,000 children who are victims of human trafficking each year, we are working to end the scourge of modern-day slavery.  Our Office for Victims of Crime just recently released a $14 million solicitation that is focused on supporting male survivors of violence and their families.  And with the President’s My Brother’s Keeper initiative, we are rallying a coalition of government and private sector leaders to create and expand opportunities for youth across the nation, demonstrating to young men of color – and to all our young people – that their country cares about them, values them and is determined to help them reach their full potential.  In fact, just last week, the President announced the My Brother’s Keeper Alliance, a new independent nonprofit focused on providing invaluable support to boys and young men of color at every point of inflection – from early childhood learning to high school graduation to lifelong development.

These are vital and in some cases, groundbreaking efforts.  But while we have made important progress, my colleagues and I also recognize that we have much more work to do – and that government cannot conquer these challenges alone.  That’s why your efforts are so important, and why the work that this forum is helping to institutionalize must go on.  It must go on until every young person’s neighborhood is a place of safety and not of danger.  It must go on until a child’s zip code does not dictate that child’s future.  And it must go on until every child has the opportunity to grow, to learn and to succeed – free of violence, free of abuse and free of fear.

I have no illusions that this work will be easy, or that complex challenges will be resolved overnight.  But as I look out over this gathering of extraordinary individuals and motivated organizations, I cannot help but be optimistic about all that we can accomplish in the days ahead.  I have no doubt that we will meet these challenges, that we will overcome these obstacles and that we will create the safer, more just society that all our young people deserve.  And I am confident that with the passion and the hard work of the individuals in this room – and our partners and friends around the country – we will make new progress, reach new heights and expand the circle of opportunity for young people across America

I thank you once again for your dedication to this vision, your commitment to this cause and your unwavering devotion to the future of our nation.  And I urge you to keep up the outstanding work.