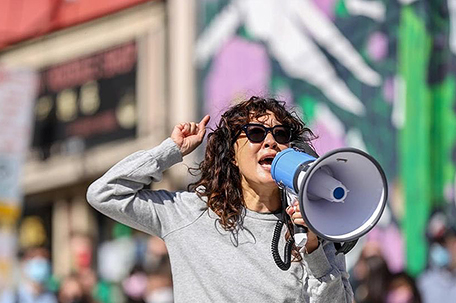 The distance between Philadelphia and Atlanta is 778 miles.

On March 17, a white man legally purchases a gun faster than a Black person in Georgia can vote and goes out to solve his problems of sexual obsession and being bad at life by taking the lives of two men and six women — six of the women were Asian and most worked at massage parlors.

A police spokesman later claims that the suspect said he didn’t target the women due to their race (uh-huh, sure) and that he was a sex addict having a “bad day.”   You know, the kind of bad days loser white men have too often and leave multiple bodies in the aftermath.

The distance between Philadelphia and Pittsburgh is 318 miles. On March 20, at a #StopAsianHate rally in the Oakland neighborhood of Pittsburgh, Sandra Oh, the Korean Canadian star of “Killing Eve” and “Grey’s Anatomy” alum, stepped into the street and spoke to the crowd.

“Pittsburgh, I am so happy and proud to be here with you and thank you to all the organizers for organizing this just to give us an opportunity to be together and to stand together and to feel each other,” Oh said over a megaphone.

“For many of us in our community, this is the first time we are even able to voice our fear and our anger and I really am so grateful to everyone willing to listen.”

“I know many of us in our community are very scared and I understand that,” she continued. “One way to get through our fear is to reach out to our communities. I will challenge everyone here, if you see something, will you help me? We must understand as Asian Americans we just need to reach out our hands to our sisters and brothers and say, ‘Help me,’ and, ‘I am here.’”

The crowd repeated back Oh’s words multiple times before she wrapped up her powerful speech, adding, “Many of us don’t get the chance to be able to say that, so I just wanted to give us an opportunity to be able to shout that.”

Oh is not overly active on social media, but she has shared messages with her 4.6 million Instagram followers in support of Black Lives Matter and Stop Asian Hate.   It doesn’t make a cause more important when a celebrity adds their voice to it, but it does make it more visible.

The distance between Philadelphia and New York is 97 miles. On Monday, March 29, a 65-year-old woman was on her way to church when surveillance video captured a man kicking the woman to the ground, stomping on her several times before police say he told the woman, “You don’t belong here.”

The suspect, Brandon Elliott was out on parole for murdering his mother in 2002.   The victim is a Filipina and Elliot is Black.

The assault was vicious, but the fact that it was recorded occurring in front of a building where two security personnel observed it all and did nothing but close the front door made it especially infuriating. Apparently, those guards didn’t get Oh’s message to help an Asian woman under attack.

The fact that Black assailants like Elliott have attacked Asians across the country couldn’t make the right-wing media machine happier as it gives them an opportunity to frame the acts of violence as angry Black criminals attacking unassuming Asian victims.

Right-wingers will gladly pivot away from paying any attention to arguments over easy access to guns of the Atlanta massage parlor shootings or that the killer was a white man. They have forgotten Donald Trump’s race baiting when he explicitly blamed the pandemic on the Chinese, calling it the “Wuhan flu,” “China virus” and “kung flu” and would like the rest of us to follow suit.

Trump’s relentless bigotry and blame gaming didn’t create the surge of anti-Asian violence, but his words did nothing to lessen it either. When a president scapegoats an entire group of people, idiot Americans — who couldn’t tell you the difference between a Chinese, Japanese or Korean person — will lump them all in a generic basket of “Asian” and proceed from there.

To be sure, there is historical precedent for tensions between Black and Asian Americans. On NPR’s “Code Switch” podcast, a University of Michigan researcher found in an examination of anti-Asian crimes committed in 2020, whites were the perpetrators 90% of the time with Blacks only 5%.

Asians and Blacks are not natural adversaries, but neither are they natural allies. They have often found themselves as rivals or strangers. In my own six-plus decades of life, I can count on one hand how many friends or colleagues of Asian origin I’ve had, which is likely more my fault than theirs.

There is no natural alliance between the Black and Asian communities any more than there is with the Latino or any other community of color. Those alliances must be forged and then maintained. If it is important for Black lives to matter to other racial groups (and it is), it is equally important for the lives of Asians to matter to Blacks as well.

“Ally” is a word that is thrown around far too casually without actually doing the work to be an ally. Building coalitions between people of color can’t simply be performative outrage. Blacks and Asians must reach out to the other side and be willing to reach back.

Don’t let #StopAsianHate disappear down the memory hole. Just because the media has moved on doesn’t mean we should.   Even in tragedy there lies an opportunity to create genuine change. If our lives matter, the lives of potential allies also suffering from racism, oppression and white supremacy must matter equally.

Our pain is great, but the pain of others can be equally so. We cannot expect the world to hear our cries if we are deaf to the cries of other people of color.