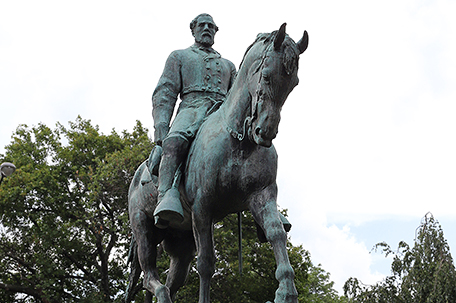 “Time catches up with kingdoms and crushes them, gets its teeth into doctrines and rends them; time reveals the foundations on which any kingdom rests, and eats at those foundations, and it destroys doctrines by proving them to be untrue.”

– James Baldwin, “The Fire Next Time”

America, the international global hegemon, the empire – finds itself conflicted.  At the crux of this conflict is the fact that for as noble as its founding pretexts are, “…that all men are created equal, that they are endowed by their Creator with certain unalienable Rights…” the “grand experiment” of American or Jeffersonian democracy was actually founded on the myth of racism/White Supremacy.  Americans, both White and Black have been indoctrinated to believe in the false social construct of race and the false narratives that Whites – Europeans and European Americans are superior to all others in the world, Manifest Destiny and American Exceptionalism.

So, what we are seeing today play itself out with the Columbus myth, President Donald Trump, Charlottesville, DACA and the Dreamers, the Muslim ban and the NFL fiasco, etc. is America being forced to face up to the conflict between its founding principles and its racist reality. Time is catching up to these doctrines and proving them to be untrue.

The late, great Dr. Francis Cress Welsing defined racism/White supremacy as, “The local and global power sysem structured and maintained by persons who classify themselves as White, whether consciously or subconsciously determined. This system consists of patterns of perception, logic, symbol formation, thought, speech, action and emotional response, as conducted simultaneously in all areas of activity [economics, education, law, etc]).”

The following are two examples to support the position that the grand experiment of American or Jeffersonian democracy was founded on the myth of racism/White Supremacy.

On October 9th, Americans celebrated the traditional Columbus Day.  According to Steve Kurtz, from Fox News.com, “Columbus Day… is a nationally- recognized holiday…It is true that the conquest of the Americas by Europeans — which starts with Columbus — was very ugly, and involved a lot of violence. But that, for better or worse, is how history worked pretty much everywhere for thousands of years. (Although it should be noted a large portion of the deaths of Native Americans was due to disease, not violence–an inevitable consequence of Old World illness in New World soil…) …The point is not to excuse the worst that happened, but to understand it. And to see that it is not the essence of Columbus, but rather part of the times. With all that, there are reasons to celebrate Columbus Day.”

Now, if that’s not Eurocentric nonsense I don’t know what is.  According to the “US Census Times”, “Columbus’ landfall ushered in one of the greatest injustices in human history: the wholesale transfer of wealth and lands from native peoples to Europeans; the unprecedented depopulation of vast swaths of the Americas as European diseases reduced native populations by 90 percent…” From the Eurocentric perspective violent history is celebrated, the death, destruction, rape, slavery and other atrocities committed by Columbus are ignored and he is deified because history is written from the perspective of the victor. That’s why it’s called “his-story”.

This racist logic, this White supremacist narrative that is clearly articulated in Kurtz’s rationale for honoring Columbus is the same narrative used by Sons and Daughters of the Confederacy, neo-Confederates and neo-Nazi’s supporting the terrorist statutes from the Civil War as paragons of virtue. In this instance it is not that the South won the Civil War. Their racism compels them to protect their whiteness, history and heritage. Their narrative tells us that the statues are supposed to help us understand context and the dynamics of what was happening at the time from their perspective.  But, like the Columbus lie, the story is told from the perspective of the oppressor, not the oppressed.  They simply want to maintain some semblance of the myth of White supremacy.

One very simple question, how could Columbus “discover” something when the Arawak people were already there?  They are some of the indigenous peoples of the West Indies that Columbus first encountered not “discovered.” That “discovery” lie is the blindness that attends arrogance.  That’s the ignorance born out of the false narrative of White-Eurocentric supremacy.  I discovered you!  Columbus was late, real late, centuries late to the party.

Kurtz wrote, “While there is plenty to criticize about Columbus…I think this movement (Indigenous People’s Day) is missing the point…History, in fact, is the story of conquest. We may not like it, but it’s our shared heritage.” No sir, that’s the Eurocentric historical perspective…not all historical perspectives begin and end with, “we came, we saw, we kicked your butt.” That’s the basis of the same lie being told by those who want to fly the “stars and bars” and commemorate the Confederate generals. They continuously tell us “it’s our shared heritage… The point is not to excuse the worst that happened, but to understand it.” Here’s the reality, those neo-Confederates who want to “celebrate their heritage” and “commemorate their ancestors” are celebrating treason and commemorating racists and traitors.  Where’s the honor in that?

Most of the post-Civil War statues that were erected in Virginia and Louisiana and other southern states were not erected to commemorate Confederate generals.  Most of the statues in question were erected as acts of intimidation to terrorize African-Americans and show unified opposition to the movement towards civil rights; not to honor dead “heroes”. In fact, Robert E. Lee opposed Confederate memorials. He wrote in 1869, “I think it wiser…not to keep open the sores of war, but to follow the examples of those nations who endeavored to obliterate the marks of civil strife, to commit to oblivion the feelings engendered.” Lee eventually swore allegiance to the Union and publicly decried southern separatism, whether militant or symbolic. These neo-confederates want to honor a man who did not want to be honored.

So, what we see with the narrative of the Charlottesville race riot and Trump saying that there were good people on both sides is as Welsing clearly articulated. It is a narrative developed through and supported by patterns of perception, logic (The Lost Cause for example), symbol formation (The flying of the stars and bars and these statutes), thought, speech, action (glorifying Columbus w/ a holiday) and emotional response (the Charlottesville riot). It is a White supremacist narrative that goes all the way back to the Columbus myth and a last-ditch effort by those in 2017 like Steve Kurtz who desperately try to defend the indefensible.

Dr. Wilmer Leon is the Producer/ Host of the nationally broadcast call-in talk radio program “Inside the Issues with Leon,” on SiriusXM Satellite radio channel 126. Go to www.wilmerleon.com or email: [email protected]. www.twitter.com/drwleon and Dr. Leon’s Prescription at Facebook.com

Phillies need to face the reality of rebuilding

Blowing off tea baggers as racist misses the point

Mahopac’s racist tweets are much of America’s tweets