There are always more victims than one in a police killing 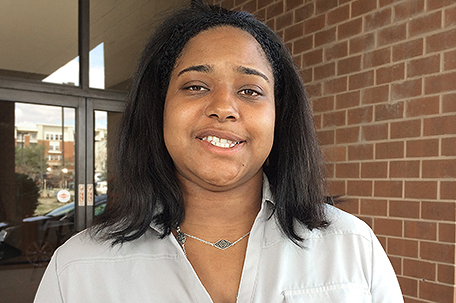 ABOVE PHOTO:  Erica Garner, 27, the daughter of Eric Garner, who died in New York City police custody, poses for a photo in 2015, as she attended the funeral for Freddie Gray in Baltimore.  (AP Photo/Amanda Meyers)

“My dad’s name is Eric Garner. No one gets to see their parent’s last moments. I was able to see my dad die on national TV.”

This was a TV ad that millions saw during the 2016 presidential campaign. The speaker was then 26-year-old Erica Garner, the daughter of Eric Garner. The spot was aired in support of the presidential bid of Democratic contender, Bernie Sanders. Erica made it clear that she endorsed and would work for Sanders because it would, as she put it, get the truth out to tell Eric Garner’s side of the story.”

So, it was a shock that just three years after the slaying of her father, the news came of Erica’s death at age 27 from a heart attack.

The tributes poured in from many notables the instant the announcement was made of her death. The tributes were heartfelt and expressed deep appreciation for the activism and political engagement of Garner in the face of monumental adversity. That adversity was the chokehold slaying of her father, Eric, in July 2014 by a New York City police officer, Daniel Pantaleo. The slaying was videotaped and ignited furor, mass protests, demonstrations and demands for the prosecution of Pantaleo. That didn’t happen. There was some talk that the Justice Department might bring civil rights charges against Pantaleo after the refusal to locally prosecute. That didn’t happen either. However, Garner’s name became a national symbol of the continuing plague of wanton and reckless police violence against unarmed young, and not so young, Blacks.

The failure to prosecute Pantaleo also stood as yet another indictment of the criminal justice system when it comes to hauling cops that kill unarmed civilians into court. That record of non-action or half-half-hearted prosecutions and acquittals has been abominable and frustrating.

The little-known and grossly overlooked backstory to the failure to prosecute cops who overuse excessive force is the inevitable toll that it takes on the family members of the victims of cop killings. The starting point is the loss of a loved one. Next is the scramble by the family to raise funds to cover expenses for the funeral and burial. Then family members must continually read biased and distorted articles, and watch news features, that routinely paint the victim as unstable, a drug and alcohol abuser, and an ex-felon. The media dredges up their prior run-ins with the law, arrest, and imprisonment records, and any incidence of family or domestic violence. The picture is one of an unstable, crime prone, impoverished Black man. The exact opposite is the case with the police officers involved in the slaying. They are painted as cops who are trying to do their duty against tough odds. There is rare mention of any drug or alcohol use by the officers, or how many use of force complaints were filed against them, or what administrative action was taken against them for violations of department procedures and policies. This one-sided picture of the victim of a police killing versus the cops that kill must be agonizing for family members whose voices raised in protest of the distortions and lies are drowned out.

But Erica was not daunted by the double standard in treating victim and victimizer. She was energized and became a committed activist working with and supporting civil rights organizations, particularly the National Action Network, that fight against police abuse. She hit the campaign trail with Democratic presidential contender Sanders precisely because Sanders had repeatedly spoken out against the mass incarceration of Blacks and minorities and the rash of police slayings of unarmed young Blacks. “I believe Bernie is not afraid to go up against the criminal justice system,” Erica said. In a statement on her death, Sanders paid tribute to her dedication to criminal justice reform by noting that it was her father’s murder that spurred her to action.

The often-missed human side to the tragedy of a police killing of an innocent is that the sons and daughters of the victims often have families, too. Erica was a mother with her own family responsibilities and pressures. One of them would have been to explain why her children’s grandfather was not in their life. Many of those who paid tribute to Erica repeatedly noted that though the official cause of her death was complications from heart issues, and a big part of that was the pain and suffering that the slaying of her father caused her and the family.

This is the human cost of police killings that go unreported and unpunished. In these cases, there are always more victims than just the one slain. Erica is the latest proof of that.

Earl Ofari Hutchinson is an author and political analyst. He is the author of the forthcoming “50 Years Later: Why the Murder of Dr. King Still Hurts” (Middle Passage Press). He is a weekly co-host of the Al Sharpton Show on Radio One. He is the host of the weekly Hutchinson Report on KPFK 90.7 FM Los Angeles and the Pacifica Network.