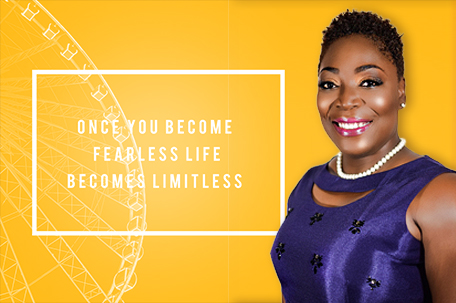 Editor’s Note: Welcome to Alawfultruth, where assumptions will be challenged, judgements will be parked at the door, and lessons will spew forth, embedded in humor. The opinions expressed here are those of a brave woman who dared to live her life in a full array of colors to amazing results. Join her for the ride, if you DARE!

The year is 1972, and two little girls are standing in a bathtub being bathed. One was crying her eyes out, while the other was furious, because she knew the woman being paid to care for them was not being kind and made her sister cry. In a split second, she had to decide if she should speak up and get in trouble for not knowing her “place,” or stay silent, and seethe.

Her courage won over her fears as she put her little arms on her hips and told that woman that she was wrong for putting soap up her sister’s nose as punishment, AND that she was going to see that her days as their caretaker came to an end!

Her heart was thumping, but the caretaker stopped. And yes, she was fired from her job that evening.

This event was one of many instances of bravery on her part and were juxtaposed on an island where girls were to be seen and not heard.

What that little girl was learning, even as it cost her dearly some days, is that being authentic and brave costs way less long term than being what others expected of her.

I am that little girl, who grew into a woman that would confound many. On July 29, 2018, by the time I loaded up a car to drive 6,157 miles across the country and back with a friend, who thought I was insane but was too excited about an adventure to stay behind, it was expected that of COURSE I was doing this!

Who else would travel by car across states in a time where crosses were being burned, Klan hoods are appearing in the strangest places, Black women were getting shot, and hate was at an all-time high? Did I mention that this was 2018 in a very divided country?

I heard all the concerns and chose to listen to my soul, that craved the kinds of decency I knew we had within, so l could restore my faith in humanity.

We drove from Philadelphia to Seattle and back, in 14 adventure-filled days, and while we were and felt perfectly safe most of the times, two incidents gave me pause.

On our way into Wisconsin, when I was trying to figure out the best way to exit a rest stop, we pulled up to a trooper, and called to get his attention.

He never looked up.

My senses immediately heightened as I watched the person in the back seat motion to him, and he still refused. I knew immediately that I should leave and I did, but I found it interesting that I felt the least safe with someone who was supposedly there to protect me.

The other time was a small town — Madison, Colorado — where we stopped for a bite to eat. We walked in, and the entire restaurant stopped, looked at us, and slowly resumed eating. I howled with glee internally, and we sat down like we had lived there since the town existed!

A wise old man turned, looked me in the eyes, and began making us feel welcomed by exhorting the history of the town where he has lived all his life, with the exception of a few years elsewhere.

He knew what he was doing, because by the time we left, the air went from frigid to pseudo-friendly and he stopped traffic so we could reverse safely.

The biggest lesson came from a couple who was visiting Seattle from Alabama. They sat next to us at lunch and introduced themselves. When they learned that we trekked across country on our own, she asked, “Are you nuts?” He said, “That is awesome! Wish my wife would let me!” He proceeded to fall clean out his chair when he shared that the Blue Angels were flying overhead at the pier, and he wished he had the opportunity to fly with them or the Thunderbirds, and l told him I actually did fly with them.

I pulled up pictures, gave him details about my flight, answered all his questions, as he looked at me in awe.

After joking to his wife that he was marrying me when she passed on to glory, he asked me what made me take this trip across the country.

My response floored him again. I told him that I was struggling with trusting White people and needed to have my soul restored in humanity. My travel companion shook her head and looked at me in shock, but my honesty opened a wonderful conversation, and we became friends with a couple that we still check in with since we parted ways.

I learned that people are still kind and helpful.

I learned some truly wanted to connect on their journey in an effort to show they aren’t all crazy and divisive.

I learned as we climbed the highest, steepest mountain to Yellowstone National Park, that it was okay to feel fear and slowly keep going, because it would not last forever.

I learned my friend was the biggest punk ever, but she trusted that l would not let her have a heart attack in the process.

She came close a few times, while I skipped ahead or coaxed her without a care in the world.

I learned that supernatural things happened while in certain places. Our camera phones shut down suddenly when we tried to film a certain rock formation in North Dakota, we felt vibrational waves run through us, we stepped on hallowed Indian reservations, and shocked every single person when they learned we were on this trip alone.

A bucket item for me, became the trip of a lifetime, and was yet another reminder that dreaming, without doing, yields nothing. Please note — we practiced common sense as much as possible to stay safe. Well, she did anyway. She laughed when people who had only seen Black folks on their televisions would stop and stare as l walked past them with not a care in the world, and in most of the places we visited, we saw no Black people. It got so ridiculous, we named our trip, the “two brown crayons tour,” as we earnestly sought faces that looked like ours.

What rung true was the question, ‘what are you willing to step from to realize a goal or dream?’

Find your authentic space in life, and operate from it as much as you can. Your soul will thank you for it.

Hailing from the beautiful island of Jamaica, Andrea Lawful-Sanders imparts the warmth, strength, and vibrancy of her Caribbean roots into every client, student, mentee and audience that she serves across the country. For nearly three decades, her life work in education, advocacy, consulting, and communications have reflected the belief that “it takes a village” to develop both children and adults into the best version of themselves. Her tenacious efforts have refined the lives and work of countless individuals, organizations and corporations, and she continues to gain momentum in this mission. Her commitment to producing tangible, measurable results that impact society for the better has earned her the title of “Impact Investor.” This also led to the creation of A.Lawful Truth Enterprises, LLC which houses “DivineMuvaDiva”, a website and public persona that inspires positive change through no-holds-barred dialogue, transparent storytelling and plenty of humor. “Muva Diva” was birthed out of the expressed desire from her social media audience to live a life of passion, while confronting the hard truths in between where they are and where they aspire to be,and to do so with her assistance. As the mother of two successful young men, wife of one nerd, and a woman who lives life fearlessly no matter what is thrown her way with unending rewards to show for her bravery, Andrea is here to pass on all of the wisdom from her roots while balancing the scales of past lessons

The Cultural Coach: Hate is best confronted by brave family members and friends