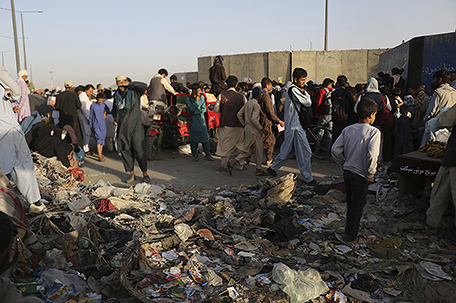 ABOVE PHOTO: Hundreds of people gather near an evacuation control checkpoint during ongoing evacuations at Hamid Karzai International Airport, in Kabul, Afghanistan, Wednesday, Aug. 25, 2021. The Taliban wrested back control of Afghanistan nearly 20 years after they were ousted in a U.S.-led invasion following the 9/11 attacks. Their return to power has pushed many Afghans to flee, fearing reprisals from the fighters or a return to the brutal rule they imposed when they last ran the country. (AP Photo)

If the people of Afghanistan are cursing the name of President Joe Biden and the people of the United States for abandoning them to the religious fanaticism of the Taliban, I have a suggestion.  Blame the U.S. if you wish, but before you do, look around your homes at your fathers and sons and uncles and brothers and cousins and husbands who were once members of what is laughingly referred to as the Afghanistan military. Curse them for throwing down their U.S. supplied weapons and peeling off their uniforms and choosing to live as cowards instead of dying as soldiers.

Afghanistan belongs to the Afghan people. If you don’t like The Taliban, rise up and take them down. Don’t depend on another country to fight for your freedom if you won’t fight for it yourselves. Blame your own leaders who fled for their lives and soldiers who refused to fight before blaming our leaders and soldiers.

America’s longest war is officially over. After 20 years and 2,400 American troops killed, Maj. General Christopher Donahue, commander of the 82nd Airborne Division, XVIII Airborne Corps boarded a C-17 aircraft and soared high in the sky leaving Kabul airport and two decades of failure in Afghanistan behind on Aug. 31.

I regret what The Taliban will likely do to the women of the country and how quickly they will turn the clock back on the gains they made over the past two decades of the U.S. occupying their country. I regret it, but it doesn’t occupy my every waking moment, and it won’t for most of the American people. Going into Afghanistan to chase down Osama bin Laden and Al Qaida made sense in 2011. To still be there in 2021 makes no sense at all.

I feel nothing. Not sorrow. Not joy. Not dissatisfaction. Not satisfaction — Nothing.  Afghanistan means nothing to me. This is going to sound cold, but I don’t care. I regret the loss of life of the American soldiers and Afghanistan citizens. Truly I do. But there is nothing about that country that deserves one more U.S. soldier to lose their limbs, their mind or their life for.

I don’t care who won it or who lost it. I don’t care if it’s Biden’s fault, former President Donald Trump’s fault, or former President Barack Obama’s fault when we all know it’s George W. Bush’s fault. The U.S. had no business staying in Afghanistan after Osama bin Laden was taken out in May 2011, but stay it did for another decade.

The Washington Post published “The Afghanistan Papers” based on two decades of documents, research and interviews with over 400 military personnel, politicians and experts on how the war was fought and ultimately lost.    Lessons could be learned if our so-called leaders bothered to read and heed, but that would mean putting our country’s needs and responsibilities to the rest of the world ahead of our petty games of political gamesmanship and poll watching.  We don’t have that kind of leadership in 2021, and it’s getting harder to remember when we did.

The U.S. spent billions of dollars trying to build a government, install a presidency, and create a military and police force. They failed on all counts. We spent 20 years building up a country and it fell to The Taliban in 11 days.

The Taliban learned the lesson that North Vietnam learned: take your ‘butt-whuppings’ from America’s superior military might and wait them out. Eventually, they will go home and you’ll still be there — and then you will win.

Nobody wins in Afghanistan. They have beaten the British, the Russians and now the Americans. Great nations go to Afghanistan to get beaten and be humiliated.

I’d rather talk about the earthquake in Haiti that has killed over 1,500 Black people, but nobody gives a damn about that, and we all know why that is don’t we? Black people suffering and dying? Where’s the news hook in that? We’ve had 20 years to care about Afghanistan. Who cares about Haiti?

Whomever was in the Oval Office when the U.S. finally withdrew from this nightmare was going to be left holding a bag full of nasty, smelly stuff in it. It just happened to be Biden, who takes responsibility for this hot mess instead of the Orange Mussolini who took credit for everything and responsibility for nothing.

While our hearts collectively goes out to the Afghan people, the fact of the matter is there are people all over the world who are suffering far more than they are. The U.S. can’t take care of all their own sick, unemployed and homeless people, never mind hundreds of thousands from another country. Nobody’s talking about evacuating thousands of suffering Haitians to America, so why do it for the Afghans? Because we invaded and stayed there for 20 years and now Afghanistan is our 51st state?

Yeah, sorry but not sorry. There must be limits to our compassion as well as space to put all those needy people. Only the Afghan people can and should determine their future. If they don’t like The Taliban, kick them out the way they did the Brits, the Russkies and now the Yankees.

It’s their house. They have to live in it. The United States is ill-suited to try and spread democracy abroad.  From open insurrection to the systematic destruction of voting rights of Black citizens by White conservative politicians to stripping women of their own reproductive decisions, freedom is under siege right here.

American democracy is standing on the edge of the cliff right here, right now. There’s no time to worry about how it is faring somewhere else thousands of miles away. The people of Afghanistan are in the same position the people of the United States are; on their own.