Adrian Peterson, Ray Rice, and us 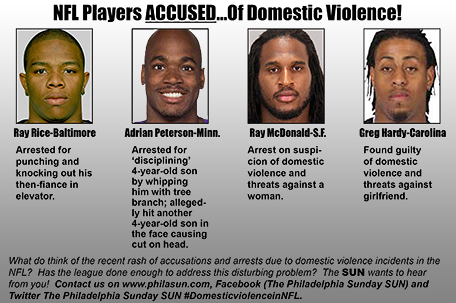 When former Baltimore Ravens running back Ray Rice and Minnesota Vikings running back Adrian Peterson made news for hitting someone other than opposing linebackers, it made me think about a discussion I had with one of my former students.

This particular student used to come into the Media Arts class that I taught in Southwest Philly late every day. Since I found that both distracting and disrespectful, I made her stay after class one day and tell me why.

She told me that she was late because she and her current boyfriend were fighting.

Not having an argument. Fighting. Taking swings. At each other.

Because every man I’ve ever gone out with has been given the, “If you hit me once, I’m gone” speech, I asked her why she allowed herself to put up with that. Her response was, “You’d leave him over one hit?! You must not love him!”

Because that response left me scratching my head a little, I sought some insight from one of my fellow teachers. Since most of them had been there longer than I had, I was hoping that they could help me out.

My fellow teacher said, “If you’ve grown up in a home where Dad hit Mom, and also hit you, that’s all you know.”

In other words, children learn what they live….especially if they’re living in a violent home.

According to the National Coalition Against Domestic Violence, men who abuse women are also more likely to abuse children.

Also, boys who witness domestic violence in the home are twice as likely to abuse their partners and children than boys who haven’t had a front row seat to that kind of violence, according to the Coalition.

Kind of makes you think, doesn’t it?

Or at least it should. What I’ve learned this past week through the incidents involving Rice and Peterson is that the question of progression when it comes to violence in the home isn’t one that everyone wants to ask.

Let’s start first with Adrian Peterson and his 4-year-old boy.

Now, as the daughter of a pair of Southerners, I’ve known what it’s like to be hit with a switch. It hurts. A lot. And if my Facebook page is any indication, there are a lot of people who believe that if we took more switches to our kids these days, they’d be a little more respectful.

But let me throw this out there. If your boss did something you didn’t like, would you hit him or her? No. You’d get arrested or fired if you did.

So why is it okay to beat your child or significant other because they’ve displeased you?

Actually, it’s not. It can get you locked up, and it should.

“Adrian is a loving father who used his judgment as a parent to discipline his son,” Hardin said. “He used the same kind of discipline with his child that he experienced as a child growing up in east Texas.”

So what if it leads to a kid growing into the kind of man who knocks a woman out in an elevator?

While Rice hasn’t said as much, I’d bet my savings that he’s seen someone hit a woman with the kind of Muhammad Ali-in-his-prime left hook that he used on his wife.

Because Ray Rice and Adrian Peterson and the rest of the NFL Domestic Violence crew are high profile men in a high profile position, we’re finally starting to talk about violence in the home.

If we want it to stop, we have to start from scratch.

In other words, it’s time to put the switches down.