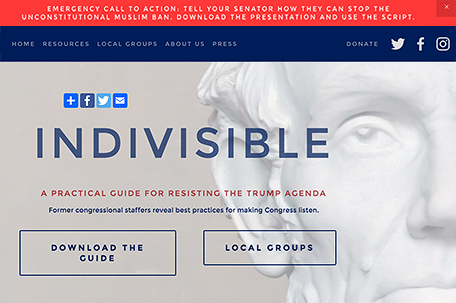 The chaos throughout the country and the world due to incendiary “extreme vetting” Executive Orders issued from the Trump administration last week has people wondering “What can we do?”

Social media memes espousing one viewpoint or the other, Facebook arguments, and severed ties with family and friends might provide a temporary sense of order and satisfaction. The keyword is temporary. Meanwhile, back in Washington, the spin keeps on spinning, and the goal posts for outrage are moved around by the hour.

Protest marches and boycotts have traditionally been effective and legal ways to address such things; but they are only a tool. A sustained, focused response is the answer. It will take a combination of both traditional and modern methods to successfully address this particular executive action, and others in the days to come.

An important first step is contacting your local representatives, followed by state and federal. A postcard, telephone call and scheduled district or main office visit goes a long way in this regard. In this sense, it really is back to basics.

Created by two former congressional staffers, this guide— which began as a simple Google document— was a response to the incoming Trump administration and its agenda. They studied the successful methods of the so-called Tea Party movement closely and fashioned a similar strategy for people to download and use as a strategic tool as individuals and in established groups on the local level. Since its creation, more than 4,500 have signed up from congressional district nationwide. The guide has been downloaded over one million times.

The 5 Calls strategy is based upon the fact that calling your local representatives is still the best way to affect change. They advocate that people spend five minutes daily calling representatives on five specific issues which are listed with clickable buttons in a sidebar on the home page. Each button connects to their local representative, and call scripts are provided.

According to their website, the American Civil Liberties Union (ACLU) a nonprofit, nonpartisan organization founded in 1920, provides attorneys, advocates and volunteers who work to preserve and promote civil liberties including the freedom of speech, the right to privacy, reproductive freedom, and equal treatment under the law. They stand in defense of the rights of women and minorities, workers, students, immigrants, gay, lesbian, bisexual and transgender people, and others who have seen bias and bigotry threaten the rights afforded to all of us in this country by the Constitution and the Bill of Rights.

The American Friends Service Committee (AFSC) is a Quaker organization works with people of many backgrounds to peacefully transform social relations and systems.

Among the many immigrant and refugee issues the AFSC addresses are the detention and deportation pipeline, detention quotas, immigrant workers rights and the US/Mexico border militarization.

The Council on American-Islamic Relations Pennsylvania (CAIR-PA) is a non-profit 501(c)(3), grassroots civil rights and advocacy group. The Philadelphia chapter was established in 2004, and was the first in Pennsylvania.

In response to the latest EO issued by the White House, civil rights attorney Ryan Houldin posted the following on the chapter’s website on Tuesday:

In response to a number of inquiries from the community about traveling abroad, CAIR-Philadelphia advises the following:

According to their website, the mission of the Office of Immigrant Affairs (OIA) is to promote the well-being of Philadelphia’s immigrant communities by recommending and developing policies and programs, which in turn provide opportunity and access to services.

The Hebrew Immigrant Aid Society in Pennsylvania (HIAS) was established in 1882 to assist Jewish immigrants and refugees from Eastern Europe. It has since expanded its focus to people from all nations around the world, including those from the seven countries named in the EO and Syria.

The mission statement of the National Services Center — established in 1921— states that they “prepare and empower immigrants and refugees in the Philadelphia region to transcend challenging circumstances by providing comprehensive client-centered services to build a solid foundation for a self-sustaining and dignified future.” The organization helps over 5,000 immigrants and refugees each year.

At a joint press conference held at the NSC offices January 27th, NSC, CAIR-Philadelphia, HIAS-PA, ACLU-PA, and the Public Interest Law Center joined forces to address the impact of the recent executive orders and reaffirmed their commitment to stand against the following:

The Pennsylvania Immigration and Citizenship Coalition (PICC) -comprised of over 50 member organizations and hundreds of individual supporters – began in 1998 as a response to immigration and welfare reform policies enacted in 1996.

On January 31st, 2017, the group sponsored an “Immigrant and Refugee Day of Action,” which included an electronic toolkit entitled “What Can You Do?” It advocated the following: