A Millennial Voice:  Will he? He will! 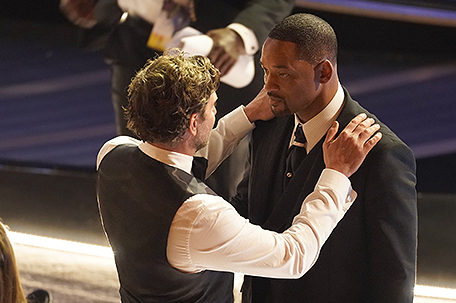 ABOVE PHOTO: Bradley Cooper, left, and Will Smith, appear in the audience at the Oscars on Sunday, March 27, 2022, at the Dolby Theatre in Los Angeles.  (AP Photo/Chris Pizzello)

On March 27, 2022, the internet was broken yet again, this time by a slap — and not Kim Kardashian’s rear end. The internet has begun calling it “the slap heard around the world,” seemingly making the incident between Will Smith and Chris Rock much more culturally significant than the Academy Awards ceremony could ever imagine being.

To provide context, Rock was presenting the Oscar for best documentary feature and made an insensitive joke about Jada Pinkett Smith’s bald head. The comic said, ‘Jada, I love you. G.I. Jane 2, can’t wait to see it’ to the blatant dismay of Jada and subsequently, her husband.

Pinkett Smith has been very transparent over the years about her battle with alopecia, an autoimmune disease that causes hair loss, and recently shaved her head because of it.

Thoughts both in support of and condemning Smith’s behavior were rampant before his handprint could even leave Rock’s face and have continued long after the awards show wrapped.

I’ve discoursed with several friends and family members about whether or not the slap was appropriate, warranted, staged, etc., and I also have a lot of thoughts on the matter.

I’ve watched the replay of the incident multiple times, and I don’t believe it’s staged. I also cannot manage to find myself getting upset at the “King Richard” actor for defending his wife and here’s why; as he mentioned in his speech and throughout his press run for the film, he is a fervent and adamant protector of Black women and his track record has more than proven that.

Jada Pinkett Smith and Will Smith’s relationship has received its fair share of scrutiny over the years due to lots of speculation about its nature, but they’ve mainly managed to stay level-headed despite adversity. However, everyone has a breaking point and Chris Rock’s inappropriate joke about Pinkett Smith’s disability was the thing that did it. Furthermore, it’s important to note that Smith has been candid about feeling guilty that he couldn’t protect his mother from abuse as a child. Comedians should have a free pass for cruelty, but your job title should not negate consequences — his consequence just happened to be a slap in the face from America’s favorite Black man.

The “G.I Jane” joke may have been meant to be clever,  but the repercussions of making Jada into a spectacle were graver than just a slap in the face. Rock making fun of Pinkett Smith’s hair, especially in a room full of white people, was not only inappropriate and degrading, it was also completely insensitive to women dealing with alopecia. It also touches upon an even larger issue — Black women being made to feel ashamed of their natural hair. Moreover, his actions have emboldened many white people to believe that they can also chime in on the matter at hand. He has shattered what should be the proverbial fourth wall, thus rendering him culturally and socially irresponsible and crass.

The irony in all of this is that Rock famously produced the documentary “Good Hair” about the cultural importance of Black hair, but has now contradicted himself by taking a cheap shot at an “easy target.” It’s also important to note that this isn’t the first time that Rock has profited off of Black trauma. He has been videotaped allowing non-Black people to say the “n-word” in his presence, and has built a lot of his career on making white people laugh about the nuances of Black culture.

Many defenders of Rock say that Smith “made the Black community look bad” with the slap or that it will “prevent us from being allowed in those spaces in the future.” But in my personal opinion, if one incident can completely “change” the mind of the aforementioned, they didn’t want us there anyway and already thought we looked bad, so are those spaces we should desire to be in? I don’t think Smith made himself or us look bad. In fact, I think his behavior humanized him.

I stand by the fact that I don’t believe Black people should be told to act a certain way in order to be accepted in that arena. That thought process is rooted in racism, patriarchy and bigotry. Black people deserve the space to make mistakes, both publicly and in private. White people do it all the time. Where was the outrage over Harvey Weinstein, Woody Allen, Clint Eastwood, etc.?

Smith, who has had a pristine record and has been universally loved by every kind of person over the span of his 30-year career, is now being made out to be a cold-blooded brute, which says much more about our culture as a whole than it does him. Unfortunately, the slap just might overshadow the fact that he won his first Oscar, but I don’t think that this moment should define him, by any means. I found his subsequent speech about protecting Black women and protecting his family to be more than adequate — moving and honest. He apologized, now I think we should all move on.

Whether or not you believe Smith was in the wrong for slapping Rock is up to your own personal discretion, but we can all agree that it’s rare to see a Black woman protected and defended in public. As a Black woman myself, it was refreshing to see that someone cares and listens. And I implore anyone who has not been in this situation to not speak on what should’ve been done, because you never really know unless you’ve been in the hot seat.

Congratulations to Will Smith for his amazing feat! I still love and support you wholeheartedly. Thank you.

Disclaimer: The views, thoughts, and opinions expressed in the article belong solely to the author, and not necessarily to the author’s employer, The Philadelphia Sunday SUN, the author’s organization, committee, or other group or individual.