A Millennial Voice: White voices in conjunction with the BLM movement – A conversation with Marla Newsom 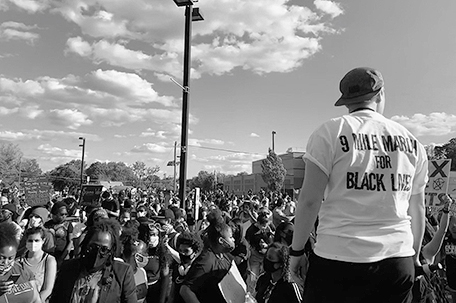 The current political and racial climate is so grave that it has called for White people to educate themselves on the unfair biases that exist within our current system. In order to support Black lives unconditionally, they must use their own voices (as theirs are often the only ones catered to), to understand that protests are the effect and not the cause, and to protect Black people with their bodies, if need be.

The current uprising is something that most of us have never seen in our lifetime, but it’s starting to bring about some positive change. Marla Newson — a White, cisgender female — held her own protest and agreed to speak with us about how she’s used her privilege to speak out about the injustices that the Black community faces.

SUN: Recount the first time you recognized the difference between the way Black people and White people are treated in this country.

MN: As a kid, my best friend was Black and we were a dynamic duo. If I was there, she was there, and vice versa. It wasn’t until high school when I really started seeing differences in myself and the Black community, but I didn’t fully understand why. I truly was not educated enough, and I wish I knew what I know now… I am glad that the younger generations are educated early on and have resources available to them. This is truly embarrassing and ignorant, but it wasn’t until my high school tried to do a “black out” day that I started to understand and see differences that I didn’t recognize before. We tried to do black face, because our basketball team made it to the finals. Our VP at the time told us ‘absolutely not!’ and I thought it was the end of the world. I, a White, cisgender female, thought it was the end of the world because I couldn’t do black face… There are Black people being killed every day and I thought I was being punished. It was during that time when I really began to educate myself and understand why we were told no and what affect it would have on the Black community.

SUN: How have you used your privilege as a White woman to aid the Black/Brown community? What would you like to see from the White community going forward as it pertains to the subject at hand?

MN: I fully acknowledge and understand my privilege as a white woman and want to make sure I am using that to help the Black community for as long as I possibly can, which is why I decided to create a “March for Black Lives” for my community.

I want to see more White people speaking up, standing up, showing up, and protecting the Black community. I don’t want White people to keep posting black boxes, and hash tagging BLM because it’s a “trend” for the week, and then go back to posting themselves on the beach. I want White people to call their friends out, their family out, their colleagues out. Make them feel uncomfortable. Make them feel how Black people have felt their whole life. I want them to continue learning, growing, and asking the tough questions that they may be afraid to ask, because if you’re not willing to ask and learn you become part of the problem.

SUN: What prompted your decision to organize your own protest? Tell us about that and give some insight on the turn out, the planning process, etc.

MN: I attended a protest in Pittman, NJ, who has a population of 9,000, 96% being white, and I was blown away by the support of the community. I expected maybe 30 attendees. When I arrived and saw double that number just at the beginning, I knew this movement affected people in a way it didn’t before. I wish it didn’t take this long to see the support, but I knew I could not let it stop. I had to do more to keep this momentum up.  I sat down with my wife at our dinner table. She was painting and my mind was going a million miles a minute with different ideas. I kept coming back to Black voices and making those voices heard. The protest I attended was great but there wasn’t a place for Black people to be vocal and that’s what I wanted and believe would move people. I developed a concept. Nine miles with nine different joining points. I thought about all the people who want to show their support for the Black Lives Matter Movement but cannot attend those large protests in cities due to physical health, mental health, age, etc. Giving people the opportunity to join when they can, walk for as long as they can, and volunteer their time to hand out bottles of water along the way was very important. I created a Facebook page with my entire concept simplified, sent event invites to all my Facebook friends and by Wednesday morning there were already 400 people interested in attending. The support from everyone was so overwhelmingly positive. My phone was on 20% or less for days leading up to the event because I was getting calls and messages from people all wanting to participate or volunteer. I had someone reach out to me named Jeri who said she was interested in being the emcee of the day and gathering the Black speakers for the event. When I created the event, I had two people personally reach out to speak at one of our three stops along the way. By the day of the march, Jeri had 21 speakers.

The entire concept was about Black voices and having seven speakers at each stop was amazing. We had people from all different backgrounds using their voices that day and the impact was massive. I expected 200, maybe 300 people tops to attend, and we had over 2000 people come out that day. I heard nothing but positive things and I want us to continue this momentum for weeks, days, months, or even years if we have to.

SUN: It seems that protests are getting less coverage even though they’re still happening… Will you host another protest in the future if need be? How did you feel post-protest?

MN: The answer is yes. I was so overwhelmed, but in the absolute best way possible. I would love to create, volunteer, or attend another protest in the future. Even since the event ended a week ago, I have been doing daily updates on the events Facebook page to continue talking about local protests, marches, organizations, and petitions. Post protest, I feel more determined than ever before. I feel like there is still so much to be done and thinking about my life just “going on” while Black people are being killed for simply being Black makes me disgusted. I want to keep learning, keep working, and keep fighting for Black lives.

SUN: Many have varying thoughts on the protests and whether or not they’ve been beneficial thus far. What are your thoughts on this?

MN: Whoever says protests aren’t beneficial are watching the wrong news station or reading the wrong Facebook post. At the “9 Mile March for Black Lives,” one of our speakers Dr. James E. Johnson spoke up about a police officer from 1994 who killed a 14-year-old Black boy El Tarmaine “L.T.” Sanders in Glassboro. The officer was never convicted and given an award only one year later. He was later hired at Rowan University to direct the Office of Emergency Management. Dr. Johnson created a change.org petition to get the officer, Peter Amico, fired from his position. We all immediately took out our phones and signed it. The petition had just under 200 signatures when we started signing Sunday afternoon. By Monday, morning the petition had over 3000 signatures, and by Monday night Rowan University announced they would not be reassigning Peter Amico to his position. So, I would like to proudly say, PROTESTS WORK.

SUN: What’s something that you’ve learned recently about the Black community and Black history in light of the recent events that you didn’t know before that has been beneficial to your understanding of the racial discrepancies that the Black community faces as we know it?

MN: I’ve been researching, reading, and watching different things every day so that I continue educating myself. Recently, I learned that Black women are at a much greater risk of dying from pregnancy complications than white women. I read in an article recently that Dr. Ana Langer, director of the Women and Health Initiative at the Harvard T.H. Chan School of Public Health in Boston said, “Basically, Black women are undervalued. They are not monitored as carefully as White women are. When they do present with symptoms, they are often dismissed.” That is something I never knew about, because I never took the time to research it and it wasn’t affecting me personally. Now that I am fully aware of this ongoing problem, I want to use my privilege to have those discussions about health care for the Black community.

SUN: What would you like to see change as a result of the protests going on right now?

MN: I, of course, with everyone else who supports the Black Lives Matter Movement, want to see justice for George Floyd, Breonna Taylor, and all other victims of police brutality.  I think as well as the officers being arrested, convicted, and sentenced to life in prison I would like to see the police defunded. We could put all that funding into public safety, mental health services, education, homeless services, and more. I do believe things will change for the better. But we must make sure come November we are voting, because we need that man out of the White House.

A Millennial Voice: A conversation with author Denzel Jones and the creation of his new novel, ‘Band of Seven: They Never Wanted Us to Be Heard’