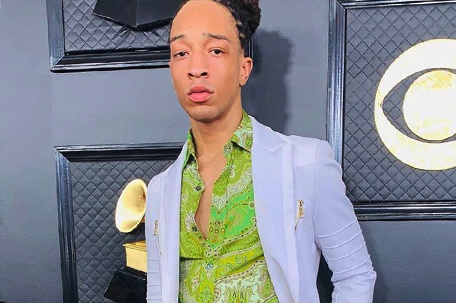 When Philadelphia local, Ty Scott (@TheRealTyScott), met singer H.E.R and mentioned that he was a dancer and entertainer to her and her team, he had no idea that this  chance meeting would lead him to performing at the Grammys a year later.

Scott shared that experience with me recently.

DR: On Sunday, January 26 2020, your life changed forever; you performed in your first Grammy awards show as a backup dancer for H.E.R! Take us back to the moment that you’d found out you’d been chosen… what were the emotions? Paint the full picture for us.

TS: I’d already planned a vacation to LA from January 14- 21, but three days before I left, I got an email from H.E.R.’s production coordinator for the Grammys asking me to send a video submission playing violin. I was told that they would get back to me by Monday morning, January 20. That Monday came, and I hadn’t received an email in regards to the show, so I was prepared to go back home. It wasn’t until 3:23pm that I’d finally received a congratulatory email accepting me as a musician for H.E.R.’s Grammy performance. My Jaw Dropped!!! I was astonished. I couldn’t believe it, so I reread it about 10 times to make sure that I wasn’t going crazy! I was overjoyed and ecstatic. I responded quickly and confirmed my role in the show.

DR: You’re a dancer, a model, and a singer so it’s no surprise that you’ve dedicated your life to being an entertainer. Did you ever expect that you’d one day be dancing at the Grammys? What was it like being on such a big stage on the “biggest night in music” for the first time?

TS: Growing up, I sat in front of the TV with my brothers and watched the Grammys every year, checking for the best performances. I always knew that someday I would get there. I used to perform and do about five to 10 shows a month as a kid for both small crowds and large crowds. When I was on stage I’d always look into the crowd and see my friends, fans, and family, but on the Grammy stage, seeing all my favorite artists in front of me… It was a magical feeling all over me. Something I’d never felt before.

DR: The day of the Grammys just happened to coincide with the high-profile deaths of Kobe Bryant and Gianna Bryant. What was the energy like in the Staples Center that night? I’m sure something like that can be an easy distraction for anyone, especially someone performing, was this an issue for you? If so, how did you evade that?

TS: I was in the Staples Center early that morning for dress rehearsal when we got the confirmed news. The energy was heartbreaking. Everyone around me was shaken up including myself. That same morning, shortly after finding out about Kobe, I got a call from my younger brother letting me know our cousin had passed as well in the Dominican Republic during surgery. My heart was so heavy. I said a prayer for my family as well as the Bryant family. If it wasn’t for the dress rehearsal run on stage, I don’t know if I would have been as clear headed and prepared for the actual show later that night.

Do you believe that you spoke this moment into existence? I know you’re a religious man, is this something that you prayed for?

TS: Being a strong believer in God, I definitely think I spoke my moment at the Grammy’s into existence. I let it manifest. I always ask God to let it be His will and His way that gets me in doors where there were once only walls. He did that for me.

DR: You documented your Grammy experience heavily on social media, which was great to see. But what I want to know is how much preparation, discipline, etc. took place behind the scenes that allowed you to seize this moment?

TS: It wasn’t easy, but I was able to lock in for an incredible performance after long hours of rehearsals for four days leading up to the show. Waking up early and going to bed late.

DR: You looked AMAZING for your red carpet debut. Tell us a little bit about the inspiration behind that look and why you chose up-and-coming Black designers and stylists to help achieve that vision? Was this choice deliberate?

TS: The Grammys gave a tribute to Prince this year, so my suit and vibe had to be Prince inspired with a touch of my own personal style as well. I immediately contacted Alani Taylor Co. because of their insane High Fashion Streetwear designs. Having Black designers and stylist dressing me was just the icing on top. Big shout out to Designer Alani Taylor (@AlaniTaylorCo), the stylists Ray (@worldofs.a.m) and Bebe (@just1_bebe), and The Shoe Plug (@thedoctordapper) I couldn’t have murdered the Red Carpet without you all.

DR: I see you had the opportunity to meet some amazing people on the red carpet including, but not limited to, Kirk Franklin, Lil Nas X, FKA Twigs and more… What was it like meeting some of the biggest names in the industry and who was your favorite?

TS: I did get to meet a lot of amazing artists and music producers on the red carpet. Usher, Lil Nas X, and FKA Twigs definitely had some of my favorite looks that night, but my favorite people I actually got to speak to were DJ Khaled and Mason Ramsey. The environment on the private red carpet is full of celebrities, so it’s very easy to speak to whoever you want to, because there’s no crazy people or fans running around all over them, which makes the artists very comfortable to talk and be themselves.

DR: Your Instagram followers skyrocketed following your performance. Is it safe to assume that your phone has been blowing up since Sunday. What’s the future looking like for Ty Scott? Are you already booked and busy? How has your life changed already?

TS: I definitely gained a few hundred followers and views following the Grammys. My social media and phone were so active that it kept crashing every time I unlocked it. The Grammys was definitely a life changing experience. The future looks great! I’ve locked in multiple gigs and jobs immediately after the Grammys. I’m excited for my future in the entertainment industry.