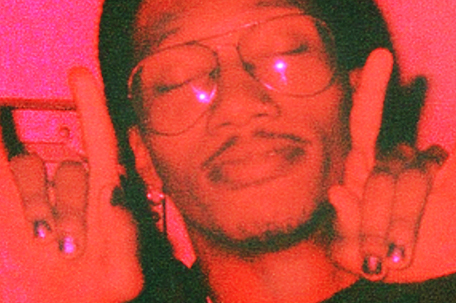 Independent and underground artistry has been prevalent for years. With the help of the internet, we have been given the chance to see the faces that represent what it is all about.

Childish Gambino, The Migos, and Chance the Rapper are just a few of the more successful independent artists that we all have grown to know and love. Joining their ranks is Micald Cills, a 23-year-old Nevisian creator from Washington D.C., also known as PUNCHBAG. Through his influence and platform, Cills is actively paving the way for other artists who wish to take a unique approach to their artistry and politics.

SUN: The music I’ve heard from you reminds me of a sort of audible collage. Sometimes we can hear you clearly, sometimes the instruments overpower your voice, and so on, and I know you’ve created visuals (drawings, paintings, etc.) that have a similar tone;what is your reasoning behind such experimentation?

PUNCHBAG: Music is pure expression to me, just like communication design. I aim to make my work communicate something instead of just being passive or idle. My main reason for this varying experimentation within my music is to create a sense of progression while highlighting the conceptual meaning behind my writing through incorporating differing mixes on all the elements of each track. Since the time we were infants, we’ve been able to use sound to express ourselves; whether we can hear it or not is another conversation. My music in its simplest form is sound collage. I love processing each instrument or sample individually and creating weird textures and finding the pieces to surround it with to create an entire soundscape. Making music feels much more holistic and meaningful to me when I don’t follow set rules.

SUN: You play with different sounds a lot, so it seems that this is a common theme. Would you say that this is a fair assessment? How did you develop an ear to make music that seems that it shouldn’t work, but it does? I can only imagine how hard that is to do.

PUNCHBAG: Yes! It’s completely fair because it’s one of my aims as a creative. We’ve all heard all the traditional instruments time and time again. I like to think of ways to challenge my audience. My ear for each production has really just been something I developed through countless hours of trial and error, playing with different tools, reprocessing handcrafted samples and degrading the sound files themselves, music is really just an extension of my overall artistic style which is based in destruction, reproduction and collage.

SUN: You’ve coined yourself as PUNCHBAG… Tell me about the inspiration behind the name?

PUNCHBAG: ‘PUNCHBAG’ comes from the idea of releasing frustration. The frustration of being a cog in a capitalist society, the frustration of witnessing injustice done onto my people and many others. It’s also a nod to the abrasiveness of a lot of my finished and released works, the idea of throwing everything I’ve got at the task at hand, wildly and hurried.

SUN: Your sound leans towards the darker side and is a bit eerier than what’s popular right now. Who are you speaking to? What story are you trying to tell? What is your message?

PUNCHBAG: It sounds like a large task, but ideally [to] America as a whole, all of my projects right now have extremely political undertones and that is completely intentional and important to me as a creative. I feel as though it is my responsibility to speak on some of the things I deem to be injustices. I’m telling the story of all the mistreated Black people of this land, as well as my own experiences with race in America while intertwining my deepest emotions and stories of growth.

SUN: In a world that is saturated with music of the exact same caliber, what gave you the courage to go against the grain and create what you’ve created?

PUNCHBAG: I want to create music that I want to hear, not what is popular, not what will bring me fame and fortune, but music that has emotion, teeth and depth. I’m a writer first and foremost, and I make my writing come alive through music. The courage to do this comes from my inner drive to create something, anything, and craft its  meaning, either during or after the process of creating the work itself.

SUN: You’re from D.C., but you spent your undergrad years in NYC.  Being that both are two very artistic places to reside, how has your experience in both places influenced who you are today?

PUNCHBAG: Both D.C. and NYC are a part of me at my very core. I certainly wouldn’t be who I am if not for my time living in both of these places, respectfully. From learning how to traverse hoods I’m not from to clubbing until 4am. All these states of mind and being, have influenced the things I think about and my approach to making music. Some direct influences come from things like GoGo and the noise scene I am fortunate to be adjacent to.

SUN: When is your next project coming out and where can we find it?

PUNCHBAG: On April 3, 2020, my new EP, “Concrete.Slabs vol.1” will be live everywhere. It’s currently out now exclusively on YouTube, SoundCloud, and Bandcamp for anyone who would like an early listen! I do want to point out that this project [was] intended to go hand and hand with Black History Month and was officially released into the world on February 28, but you know how it is for independent artists! Sometimes you just gotta wait in line.