A Millennial Voice: To Duo with Love 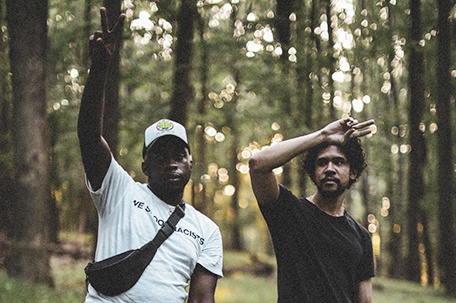 Earlier this year, I was fortunate enough to speak with the popular Philly collective group, HBC, who is  back again with a new project!

Two of the group’s members, Moses and Sheed, teamed up on their first joint album, and the result was worth the wait. “Absent,” which hit streaming platforms a month ago, mixes genres and sounds in such a cohesive and concise way that your sonic taste buds are consistently satisfied throughout the entirety of the 25 minute album.

DR: Your newest project, “Absent,” blends the soft and ridge elements that we’re often confronted with/by in our day to day, (ie. relationships, dissension, etc.) as a cocktail instead of a dichotomy. With the pairing of harder beats/softer content and vice versa, what is the message here?

Sheed: I think it’s just an expression on how life can be. Some of these songs were done during low points of our lives and we needed a release. I think with “Absent,” we were able to capture a lot of the complexity of what it means to be in your 20s.

Moses: It’s mostly just reflective of our mindset and mood in that moment. Life is kind of like that a lot; bittersweet. A lot of our music is deeply textured in that way because of what we go through making it. I hope that this album has a little bit of something for anything you might be experiencing when you hear it.

DR: We did an interview with some of the members of HBC earlier this year, and I don’t remember a Duo project with you and Mo being brought up. How long has this project been in the works? I know you had one feature on the primal track, but why just you two? What was the inspiration behind the project? Would it have worked with anyone else being on it? Why or why not?

Sheed: We wanted to keep it a surprise for as long as we could. I know that people have expectations when it comes to HBC, especially with me and Mo, so we really wanted to make sure we had everything in order before we announced it. Me and Mo’s chemistry is perfect, and I don’t think it would have worked to this magnitude if I had done it with someone else.

Moses: We were destined to make this album. From the moment we started working it felt very natural, like two sides of the same brain. I feel like a part of TheNeptunes’ DNA is in us for sure. We’ve worked on this project for years, but started putting it together around nine months ago. It took on its own life. The inspiration came from us wanting to make something that was better than anything either of us could do alone and I feel confident that that’s something we did with this album. It couldn’t have been what it was had I worked with anyone else.

DR: I really love “Haunted House”– it kind of brought me back to OG N.E.R.D/The Neptunes/Pharrell, especially with the guitar at the end. What music influence fueled this project as a whole?

Moses: Thank you! We had a lot of fun making that song. Shout out to Jeff Zimmerman on guitar at the end! We have a lot of similar music tastes but I think it’s all rooted in R&B, jazz, funk, rap, Black music. I was thinking of Rick James/Parliament when I started this. That groove/genre is very influential for me, anything soulful and weird is right up my alley.

Sheed: Yeah, big shoutout to Jeff for doing the guitar on the end; we literally spent hours just sitting there listening to him do riffs and when we landed on the one you hear on the end of “Haunted,” it just felt perfect. Piggybacking off of what Moses said, I have to agree I don’t think we had such a set musical influence as much as we were just inspired by Black music. We experimented with a lot of different sounds and genres. I think that’s what I’m most proud of with this album. There’s no set box or genre it belongs to.

Moses: It’s absolutely a departure from anything either of us has done. I think that’s why I love it so much. This project really taught me the power of collaboration and trust. I’ve also picked up a lot of lessons on how to work our records better. I think the big thing that I took away from making “Absent” was a better understanding of how to transcend. This was a very smooth project to make.

Sheed: Having Moses being around and bouncing ideas off of really has made me a better artist not even from just this project but from the beginning. I think he showed me what an artist can be and what we’re really able to do. There’s records of his where I’m amazed and I’m just like I didn’t know we could do this. “Absent” definitely pushed my boundaries and what I wanted to be as an artist. I owe a lot of that to Big Kiwi himself.

DR:  Explain what you’re trying to say (individually) with the title of the project, “Absent” as it relates to its content. One could say that the music is a bit mysterious, and dare I say whimsical, but I’m curious to hear your take on this.

Moses: “Absent” is the soundtrack to the daydream you keep having. I think it’s more of a feeling than anything. It’s meant to take you away from reality. This music is meant to live to and with, [to] run through. Ironically that’s how putting it together felt, simple, flawless, guided. The title represents the freedom we felt in each other creatively. Working as one invites an absence. You get to go on autopilot and let your heart speak.

Sheed: “Absent” to me is just freedom. Freedom from a box of what music is supposed to be especially coming from two black men in their 20s. I can’t really describe those sessions because to me it just felt like breathing. As my brother said, it just felt natural.

The advice offered in this column is intended for informational/entertainment purposes only. Use of this column not intended to replace or substitute for any professional, financial, medical, legal, or other professional advice. If you have specific concerns or a situation in which you require professional, psychological or medical help, you should consult with an appropriately trained and qualified specialist. This column, its author, the newspaper and publisher are not responsible for the outcome or results of following any advice in any given situation. You, and only you, are completely responsible for your actions.

A Millennial Voice: Gift ideas for the men you love