A Millennial Voice : The Highway to Freedom 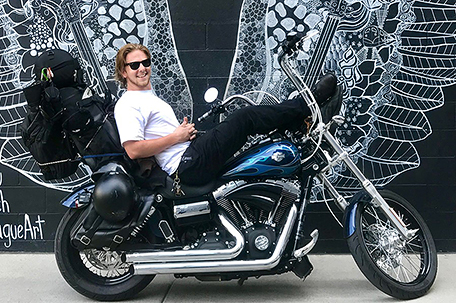 When Skyler Shema made the decision to go cross country on his customized 2012 Harley-Davidson Dyna Wideglide, it was to find a new home for his music studio. And though he unearthed several locations that fully encompassed his vision and accommodated his needs, he also gained something more — awareness.

“I think I became more aware of myself as a person [during my trip],”he said. “I am physically and mentally different.”

Shema’s love for motorized vehicles can be traced back to memories from his childhood, but it wasn’t until a few years ago that he shifted gears and made motorcycles his primal focus. Aside from the pride he’s taken in learning how to ride, fix, and customize bikes, Shema also states that riding has become a form of therapy for him.

“For me, riding is some of the best therapy, when I’m feeling uninspired, needing inspiration, or I want to let some steam off, or if I just want to go somewhere to write in my journal. Riding opens your eyes and keeps you aware,” he said.

With months of planning under tow, a staunch support system, and a bike that he’d tuned for highway driving, Shema left from Abington, on July 25, 2019. The bicoastal trip spanned over 9,000 miles through the U.S, and though Forbes estimates that a trip of this caliber totals at around $4,712, this particular trip maxed out at about $2,000.

The voyage, which took a little less than six weeks to complete, began and ended in Pennsylvania. During his traverse, Shema traveled through 20 different states with nothing or no one but himself. The money he’d saved up, a few “bare-bone necessities” and his bike. Along the way he was greeted by friends and a few strangers that provided him shelter, restaurants that would allow him to do odd jobs for quick money, gruesome conditions, beautiful landscapes, and more.

Throughout his excursion, Shema came across a horde of people, many of whom were much different than him. The culture shock that typically comes as a result of meeting so many different people, experiencing new places, and exploring new cultures was welcomed and had much to do with the acceleration of his growth.

From the familiarity of Pennsylvania to the deep canyons of Los Angeles, and from the endless cornfields in Wisconsin, to the mountain tops in Montana, Shema and his bike have been afforded some of the most beautiful sights that this country has to offer – something that is not lost on him. Throughout his journey, he made it a point to both publicly and personally document his experiences for the greater good.

“I’m grateful that I was able to take out the time on top of the mountain in Montana, just writing down that I’m 11,000 feet in the air just writing it and saying “wow, I’m here now” a lot of self-reflection.”

Though the trip had many peaks, Shema assures that traveling coast to coast — however “worth it” — is anything but an easy feat. He acknowledges that a trip of this magnitude is not meant for everyone, attesting to the fact that a life on the road can become quite gruesome in both the mental and physical sense.

“I’d say it’s difficult because when you’re out [on the road] for such a long amount of time, mine was [over] five weeks, it’s kind of difficult to keep up with yourself: all of your habits, routines, cleaning, all that stuff is sort of out of whack.”

Aside from the daily upkeep of self that inherently falters as a result of being on the road for such a lengthy period of time, food also becomes a subject of concern as well. Shema spent the majority of his quest, “eating rubber” (quick grab foods that you can find on the side of the road) for the bulk of his nutrients.

The route Shema had planned for the entirety of his trip made the shape of a smiley face, which is quite interesting, because his trek included some of the worst roads he’d ever traveled. The weather conditions he endured coming back from the East Coast took a toll on him as well.

Some may consider a bicoastal trip of this magnitude to be too dangerous to take on solo, stating that it’s difficult when you’re doing it by yourself because anything can happen, but he found it to be an exhilarating enigma.

At just 23 years of age, Shema has accomplished something that many people can only dream of, and said that he’d certainly do it again.

Following the trip, he’s been left with a huge decision — where to move.  He’s dwindled his relocation decisions down to Nashville, or a few different cities right outside of Los Angeles, but he knows that wherever he ends up will have to have a great market for electronic music and be motorcycle friendly.

Shema is a living example of how following your dreams can change you for the better; he encourages all others to do the same. You never know what you’ll find.

“If you want to make something happen, you need to make it happen,” he said.

Sources: “Here’s How Much A Motorcycle Trip Across America Will Cost You”. Forbes.com.