A Millennial Voice: The Election 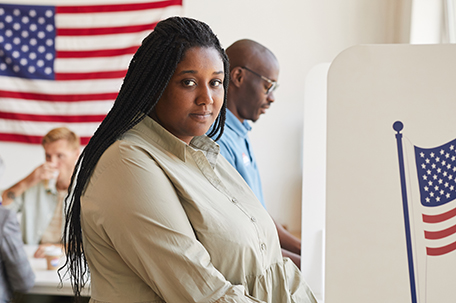 November 8, 2016 was not the first time that I’d voted in the general sense, but it was — unfortunately — the first time I was legal to vote in a presidential election.

The importance of voting was never lost on me, as the idea of having a choice and the ability to act on it is arguably something that we’re all born with. From birth, we learn how our actions and our voices influence others to do what we need them to do; whether it be crying until our parent feeds us as infants, voting between pizza and burgers for dinner with our family on a Friday night as a child, choosing a new school mascot and an adolescent, all the way up to voting in an actual election as an adult, (and any form of election in between the aforementioned).

I’d been old enough to understand the importance of Obama winning the presidential election in both 2008 and 2012, so one could imagine how much it was to my dismay that the 2016 election filled me with disappointment and futility. Choosing between Hillary Clinton and Donald Trump was a no-brainer, but my heart was really with Bernie Sanders.

During his 2016 election campaign, Donald Trump made a stop at my Alma Mater, West Chester University, and for the first time ever in my life, I was able to see up close just how disjointed this country was in matters of basic political policy and what ought to be versus what ought not to be. The ignorance I saw displayed from some on my fondest classmates and strangers alike inspired me even more to hit the polls and encourage people to register to vote!

All I could think about was the fact that a callous, inexperienced man like Trump couldn’t possibly hold office. I mean, in my mind there was no way that this country could elect a man that was so viscerally dangerous, especially following a presidency that was as monumental as Obama’s. Months later, I’d find that my thought process was wrong.

Swallowing my desires and voting for Hillary Clinton also wasn’t the easiest feat within itself, but accepting total defeat in said election was a far worse feeling than I could’ve ever imagined — the gems of hope that I still had left in my pockets were stolen away and there was nothing I could do to get them back.

Walking around campus the next day was akin to being a member of the cast in an episode of “The Walking Dead.”  Everyone I passed throughout that day was somber and lifeless, and rightfully so. Professors canceled classes, tests were delayed, etc., and no amount of “all we can do is hope that he’ll do a good job” comments could ease the harsh reality that an imbecile would be leading our “free nation” for the next four years at minimum.

All I could see was the divisiveness, the lies, the gaslighting that his campaign was founded on and non-coincidentally, the platform that he still stands proudly and willingly stands on today.

The last four years have been nothing short of difficult and eerie, but now that we’re at the end of that trajectory, I can’t fathom us having to deal with another four years of this. With the pandemic and the social,political and racial unrest at hand, it doesn’t take a genius to know that this man cannot win another term.

And while I’m much less enthusiastic about this year’s election than I was in 2016, I will be casting my vote and I encourage others to do the same on November 3, 2020, (or before).