A Millennial Voice: The closet and the mirror 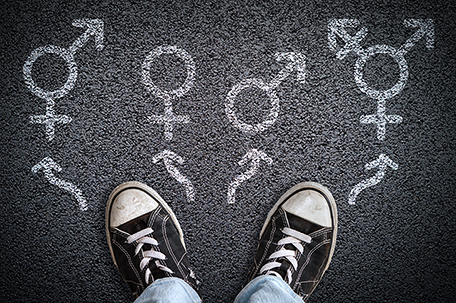 The concept of intersectionality can be so daunting, especially when two of the communities you occupy often come to a head. Toxic hyper-masculinity is a well-known cancer in the Black community, yet we have allowed it to metastasize, thus influencing little Black boys (especially), forcing many of them to believe that they’re less of a man if their interests skew from the “norm”. This is a thought process rooted in bigotry and dates back to the days of slavery when Black men were looked at specifically as nothing more than savages by their captors.

This country was bred through discriminatory practices that targeted anyone deemed as “other,” but we’re living in a time where U.S citizens are consistently urged to eradicate their congenital intolerances and biases.

In 2011, four years prior to the nationwide legalization of gay marriage, California became the first state to mandate that LGBTQ+ history be included in public school curriculum; The Golden State has since welcomed Colorado, New Jersey and Illinois into their gates of forbearance.

There’s been much debate about whether or not the inclusion of LGBTQ+ history in school curriculum is appropriate. More specifically, the Black community has been very vocal about their feelings through various mediums. One sect believes that Black history needs a general implementation before the addition of LGBTQ+ history is even considered, another sect believes that one shouldn’t negate the other, and the rest have fallen into the abyss.

The Supreme Court’s ruling demanding that the union of same-sex couples be recognized in all states was a huge win for the LGBTQ+ community, and though some may disagree, I believe that it has contributed to the betterment of this country as well. However, regardless of the law, the freedoms of gay peoples have been challenged both prior to and following the ruling.

Title VII, of the Civil Rights Act of 1964 states that it’s illegal for employers to discriminate on the basis of sex, race, color, religion, or national origin, but it seems that the Department of Justice  does not feel that the act covers transgendered individuals, and they’re attempting to overturn the law, thus creating yet another obstacle in the push for tolerance equality.

While I am an avid supporter of the LGBTQ+ community, I’m neither male nor am I a member of the community, so I don’t live their struggle firsthand. However, I am fortunate enough to have my cousin Durrell to offer some insight on what it’s like to be him and share how he feels about the aforementioned:

At my core, I’m a human being. That’s what we all are. For some reason, so many of us tend to forget that. I am strong, yet scared of not knowing. I am always attempting to put my feet in everyone else’s shoes, metaphorically speaking. I’m curious. About everything. Which is something I suggest all people try. Being curious, that is.

When did you first realize your sexuality?

To be honest, I had no idea what the term “gay” stood for until about 5th grade. I had heard words like “sissy” and “faggot” before, but I thought they were just everyday insults. You know, the ones the kids sling around the playground. I went to some rough schools. It wasn’t until 5th grade that I started to understand the connotation. So I would say I was about 10 or 11 years old when I first mentally called myself gay. At the time, I was horrified. Realizing you were gay in the mid 90’s was a lot to handle. We didn’t have any of the representation that we see in the media today for me to look up to. At least, none that was accessible to me. In the Black community, even the slightest hint of a “limp wrist” was reason for discipline. So for the next 10 years I literally hid a side of myself away because I was scared of what people might think. Instant loneliness is what it felt like.

The year before the election that shocked many of us, gay marriage was legalized. You have a partner that you do plan to marry, so what was that moment like for you? Do you ever fear that  this right will once again get taken away?

I was in Disney World when I heard the news, so I’ll never forget it. Finally, some form of equality. It was a very proud moment for the LGBTQ+ community. More than anything, it showed us what doors could be opened.

If all goes well, that law shouldn’t be tampered with too much over the next few years. Once it’s about 10 years old I think it’ll pretty much be set in stone.

Donald Trump hasn’t specifically condemned gay marriage as of late, but his messages are extremely divisive. How has that affected you?

Lately there’s been a lot of talk about whether or not LGTBQ+ history should be taught in schools. Black folk specifically seem to be very divided on the matter.What are your thoughts? Do those parts of  your identity often come to a head?

June is Pride Month. October is LGBTQ History month. Black people have been fighting to have more of our history included in year round curriculum for a very long time. I would absolutely agree that LGBTQ+ should be taught in schools, however, I do believe people of color need to have more clear voices included in the classroom year round.

Being Black and gay can be challenging because Black people have a hard time with “toxic masculinity.” So yes, both of those parts of my identity clashed, especially when I was younger. I believe that [by] teaching both more Black history and LGBTQ history, children become more well-rounded and cultured. Most hate and discrimination comes from ignorance and fear of not knowing. If children were more informed at a younger age, they could begin to express themselves more clearly and identify with other individuals who aren’t like them.

“Somebody, your father or mine, should have told us that not many people have ever died of love. But multitudes have perished, and are perishing every hour–and in the oddest places! –for the lack of it.”– James Baldwin