A Millennial Voice: Quarantined – How one artist managed to turn lemons into lemonade 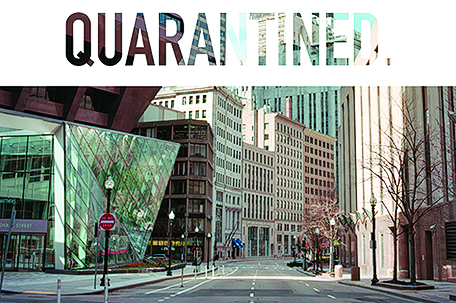 The ways artists of all mediums have managed to stay inspired despite the current state of affairs has been both exhilarating and refreshing to view. Whether it be through conducting photoshoots via Zoom, altering business operations to accommodate customers, or even documenting the world under the guise of COVID, the methods I’ve seen used to “push through” during this time have been nothing short of admirable.

Nick Nogueira, a 24-year-old photographer from Boston is a perfect example of the aforementioned. Nogueira, who specializes in lifestyle and portrait photography, successfully turned an unfortunate circumstance into gold with the creation of his coffee table photo book, “Quarantined.”

DR: Creatives have been itching to find ways to stay creative throughout this crazy whirlwind of a year. I hate cliches like “turning lemons into lemonade” but in essence, that’s exactly what we’ve been doing, and that’s exactly what you’re done with your creation of the “Quarantined” photo book. Tell us a little bit more about the decision to create something like this. How were you feeling when you made the decision to create and publish this?

NN: Back in March, I woke up out of a dead sleep and said to myself, “You have to go document the city of Boston,” No one had been outside for weeks — people weren’t even walking their dogs around the city… It was a complete ghost town, which luckily made for some amazing, timeless photographs.

At first, my plan was to just document the city with my Mamiya RB67 a few times a week and develop the film to see how my photos came out, but after a few weeks, I realized that I was the only one photographing the empty streets, and after a few months of planning and creating, I realized I had to create and publish a book!

DR: A huge trend in photography right now is the use of film cameras, which I recognize that you used for your project. I’ve always felt that film photography is the most timeless medium aside from black and white. Did this same sentiment drive you to use film for this project? Furthermore, aside from the obvious, what story are you trying to tell? What is/was your goal?

NN: I completely agree, film photography is amazing. I started shooting medium format film a few years ago and completely fell in love with it. I realized that if I photographed this whole series on film, it would make it more special to me and to hopefully everyone who purchases this book!

My main goal for this book is to give you a firsthand look at how this global pandemic really affected us. I want each and every person who purchases this book to feel as if they were in the streets with me at the time I took those images. It was such an unexplainable feeling being the only one outside, and I hope that’s conveyed throughout this book. Also, you will never see any of these places that empty again, so I thought it would be cool for people to be able to pass it down through generations.

DR: I’ve never been to Boston, but I know it’s such a historic city and seems to be pretty popular. I could only imagine that your experience with the shift in population density is akin to mine here in New York, but I must ask, what has it been like existing in such a notable place that was once flooding with people and tourists but is now pretty desolate?

NN: Boston is a very historic and popular city, so being out and about throughout the city and not passing by a single person or car for hours was one of the strangest feelings I’ve ever had. Each and every photo you see in this book was taken during the usual Boston rush hour(s), during the week, or during mid-afternoon hours on the weekend when the city is usually jammed packed with locals and tourists.

DR: Is this your first time doing something like this?

NN: Yes, this is my first time doing something like this. I always told myself I wouldn’t create or publish any type of book unless I really felt like I had something unique to show my city and the world and this just happened to be the perfect time and subject.

DR: Undertaking a project as revolutionary as “Quarantined” is really such a big deal as there’s so much longevity there — knowing the weight that such a project holds, did you ever feel overwhelmed by the task at hand?

NN: I did feel a little overwhelmed at the project. I spent weeks creating it, making sure the whole book had a good flow to it because I didn’t want to put out a project that seemed rushed. Being excited for people to see my first ever book, kept me very inspired, which I think helped with the nerves a little bit too.

DR: What’s the significance of the places you included in your book? I mean, there’s so many different places and things to photograph, because everywhere was essentially “empty,” so what drew you to including the areas that you did?

NN: I figured that no one would really care that much to see a book full of just random empty streets, but if I thought that if I could capture the main tourist attractions, and parts of the city that usually see very heavy foot traffic, that I might be able to catch the eye of a large audience. Each week I mapped out a part of the city that I wanted to cover and figured out where the busiest parts of that section were. I even shot some photos of Fenway Park on what should have been opening day and there wasn’t a single person anywhere in sight which again, was so strange.

DR: Lastly, where can people find your work and furthermore, how can they purchase your book?

NN: People can find and purchase my book on my website at: www.nicknogueiraphotography.com/quarantined-book. And hopefully, in a few months, you will be able to purchase at Barnes and Noble, as well as on Amazon!