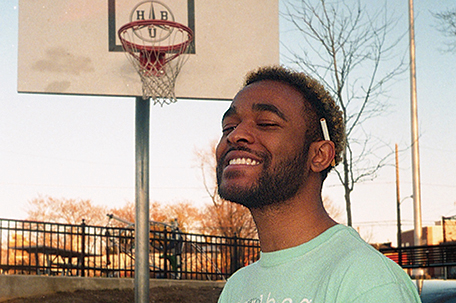 In continuation of the “conversation” series I’ve been doing since the COVID-19 quarantine began, this week’s Q&A is with 21-year-old producer/rapper, Jarret, also known as Fatbackb*****d.

FBB hails from from Prince George’s County, Maryland, and currently lives in Philadelphia, making music with his friends.

He’s always wanted to be a music producer, even prior to knowing what that meant. In middle school, he taught himself to make beats and play piano from YouTube videos. In high school, he started to shop his beats around to other rappers, but  wasn’t satisfied with the work they produced and decided to start writing lyrics  for himself.

SUN: Your group just dropped an album… What was the inspiration behind the project? Tell me a little bit about the genesis of the group.

FBB: My rap group is called IXY, [but] it’s more than just music. We have graphic designers, photographers, videographers, and a fashion designer. We met in high school and were loosely friends until we got tight after realizing that we were all into music. I got Bredo and Nas into producing and everything took off from there; we started rapping and freestyling every time we were together. We spent most weekends at somebody’s house making beats or recording songs that (thankfully) never got released. We started releasing singles in 2015 under a few different names. We always planned to make a group project — it just never happened until recently.

We just released “Hard On Thots,”our first group mixtape that we’ve been working on since late 2018 and it really feels like the natural progression of things. “Hard On Thots” is like a snapshot of those producing and freestyle sessions from 2015. We each have our own subject matter and influences to bring to the table, but we also push each other to get the best product; if we thought a certain beat/verse wasn’t HOT enough, we would let each other know and then we’d go back and make it better.

SUN: Many believe rap to now be an inundated industry, full of mumble rappers with little to say. How do you counter this argument as it pertains to your artistry?

FBB: We ain’t really sayin s**t either — not everything has to be serious all the time. Sometimes you can just have fun with what you’re doing. Well, that wasn’t completely true, we do have a lot to say, but we’re just genuine about it. We have a sense of humor. We don’t try to fit into any model of what a rapper’s “supposed” to be like, and if we do we’re probably being ironic.

SUN: What are your thoughts on the idea that music today is trite and uninspired as opposed to music of the past?

FBB: IMO if you think music today lacks depth, then your knowledge of what music exists today is limited. There’s a lot of deeply inspired music coming out, really experimental stuff. Who cares if somebody just wants to say “aye” and “yah” for 2 minutes straight? I think it’s closed-minded to try and act like it don’t crank.

What I will say about the current state of music, though, is people don’t give their projects enough time to resonate with the audience. I don’t want my favorite artists dropping three projects a year. Just take your time and let people sit with your work.

SUN: In a time like this, do you find it difficult to find places to pull inspiration from?

FBB: No, if you keep your mind open, you can get inspired by the most random things. Whenever I have too much of a strict idea of what my music  “should” sound like, it’s impossible to get inspired. I have to notice the times that I’m overthinking things and just relax a little bit — it goes a long way. I can end up being inspired by a game I’m playing or write a whole song based off of a line I heard in a movie. It’s about keeping your eyes open and not trying to dictate what can/can’t inspire you.

SUN: Lil B The Based God was featured on your album in what I’d say is probably my favorite song…  Why is it important for you not to “play a character” for clout? Do you feel like that makes a difference in the music?

FBB: It’s actually a really funny story about that song.  Bredo saw him tweeting about doing features and told us he sent him an email. We got a reply shortly after, but honestly it sounded like a bot,  none of us thought we were actually talking to Lil B. So we sent him the beat and he emailed us and telling us he loved us… About a month later, we checked the email and we had a Lil B verse in there and we each listened to it on repeat for days, it was the funniest thing because nothing about the situation made sense.

Eventually, me and Bredo went back and finalized our verses ‘cause we wanted that track to be hard enough to warrant having Lil B’s verse on it. It’s so important to be yourself when making art… The audience can tell when you’re faking, it’ll feel forced. My friends and I are always joking so when I’m rapping, I’m just trying to find the craziest things to say on the beat to make them laugh. There’s definitely a balance though. You want your art to be taken seriously, but don’t take yourself too seriously or else you’ll be crying on the beat all the time.

SUN: You call your album a “music experience”… Explain what that means and how you’ve curated an “experience” for your listeners.

FBB: That was Jay. He’s an English poetry kind of guy, so he likes colorful language. It really is an experience, though. Listening to the tape is like a little window into what it’s like to hang with us. There are only three hooks on the whole tape so it’s like nonstop back and forth between us like a conversation. Anyone that’s has hung out with all of us in one room can agree that that’s all HOT is; a conversation with IXY.

SUN: Lastly, when can we expect new work from your group?

FBB: Bredo and Nas’ new single “MD Plates” is coming out May 1. I have a single coming the following friday, and so on. We’re dropping a lot of singles right now building up traction for Jaylen and Nas to release their solo projects. I’m really excited for that. Jaylen’s gonna give us his experimental revelations bars, Nas coming with his ignorant s**t and of course Bredo, Nas, and I are gonna max on the production. They won’t sound like HOT either, for our solo projects we like to explore more personal ideas, so it’ll be interesting to see.