A Millennial Voice: Oscar Sanders and the political discourse 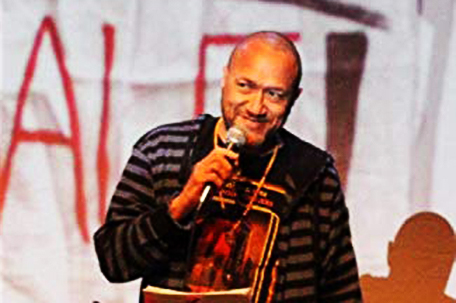 Oscar Sanders’ love for politics was instilled in him during his childhood, as was his passion for writing. The two recently merged in what has become his self-published book, “Exposing Politics: A Collection of Poetry”; a book that makes the bold statement that “land of the free” as it pertains to American identity, may be nothing more than lyrics in a song.

While most children nearing adolescence are fixated on the latest trends and their compadres, Sanders’ concerned himself with the happenings of the world around him. Growing up in the latter half of the 20th century enabled him to see Louis Farrakhan speak live and to attend events like Saviors Day and The Million Man March alongside his mother, Ruby Sanders. The aforementioned had a huge impact on young Sanders’ life, and would ultimately solidify his purpose in the world.

Seemingly a revolutionary, Sanders states that our community tends to wait until it’s us to really do something and take action: A hitch that he is determined to improve with his pen. He believes that as a people, “We spend too much time watching history as opposed to making it. I want to make a difference… We have to fix the people that are broken and stop casting them aside”.

Sanders’ passion for social justice leaps off the pages of his book. The award-winning poet and author takes a unique approach to contemporary poetry by employing a much more rugged slant to truth telling. His explicit imagery, notable use of punctuation, and layman-esque writing style is far from aloof and leaves no stone left unturned.

“Exposing Politics: A Collection of Poetry” was released in 2018 and has gained some traction as it’s been turned into a self-directed play and movie. He’s performed spoken-word all over the country to the satisfaction of some, and to the chagrin of others. Citing that he’s had people in the crowd look to him with disdain during performances, and states that there have been times that attendees left the show prematurely. The latter’s attitude has not dissuaded him, but has confirmed that the work he’s doing is difficult but vital.

In his writing, Sanders’ attacks a wide array of prevalent issues such as but not limited to, racism, homelessness, corrupt media conglomerates/personalities, and the Flint water crisis. And while some may find his stances and prose to be controversial and crude, he feels that it’s necessary to tell the unplugged the truth. His thought provoking stanzas are striking and certainly one of a kind. See the example below:

Sometimes I have to dress up to emit distinction.

Politics is all about appearance and perception.

You have to fit in.

With the 2020 presidential election on the horizon, the current state of politics has taken precedence over most other subject matter in many of our day-to-day conversations. Political pundits and social commentators alike are constantly updating us on the who, the what, the when, and the why, but most inhibit pompous language that the average person may not clearly understand. It is for this reason that he believes his writing style is both optimal and necessary.

“Tactics are used to confuse certain types of people… We’d be better off if we really understood the world. I want people to know that there’s a person like me that’s willing to teach kids and those that have been misinformed through mass media. The people deserve the truth. I want to educate them on how they can be more civically engaged.”

He believes that there’s a revolution on the rise, and hopes that his writing will encourage people to dig deeper and start asking the hard questions that we tend to avoid or overlook before that time comes.

From touring with a jazz band to a brief stint in jail, Sanders’ life experience has made him well-rounded and abled him to fully understand the structure of the “system”. His passion for the betterment of the world and communities of color is indubitable. He plans to continue to educate and entertain the masses through progressive poetry and other art forms alike, thus allowing him to aid in fixing the problems that we face daily.

If you are interested in learning more about “Exposing Politics: A Collection of Poetry” and wish to  purchase his book, visit: https://www.amazon.com/Exposing-Politics-Collection-Poetry-Justice/.