A Millennial Voice: My Journey to Pfizer 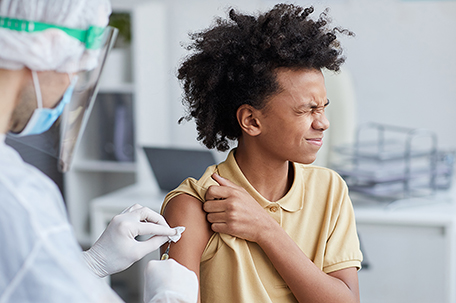 A week has gone by since I walked into the gym of Medgar Evers College in Brooklyn, New York to get the first dose of my Pfizer COVID shot.

The long, organized aisles with military personnel directing this person or that person on where to go, made the experience feel quite apocalyptically cinematic in a way that brought me no comfort.

When the announcement of the vaccines came seemingly overnight, I like many others was skeptical and resistant to the idea of getting it.

Or, “I’m going to wait like a year after the first set of people get it so that I can see the long-term effects…”

Or, “I don’t get a flu shot, so I’m not getting the COVID shot…,” and more comments rooted in hesitancy, swirled about almost as frequently as the virus itself. So when my family and friends pivoted from being anti-COVID shots to getting it themselves, I was taken aback.

The first set of family members and friends who received the vaccine wasn’t enough to change my mind, and maybe at the time I was a bit judgmental, seeing as though we all were in harmony about our feelings about it not long before. But, I also had my own reasons for not wanting to get it as well. I felt — no, still feel — that there’s not enough conclusive research around the vaccine, but most importantly, there couldn’t possibly be any concrete evidence about the long-term effects that the vaccine may have on fertility. And because having a child is such a solidified part of my plans for my future, I had/have no interest in doing anything that could potentially harm my chances of that happening.

More and more frequently, people were toting their vaccine cards like a teenager who just got their license, but still I wasn’t convinced. Even though it felt like the entire world surrounding me was getting the vaccine, I knew I could count on a few other skeptics to understand and back up my reasonings. In a large sea of “you should just get it,” there were several droplets that felt the same way I did and backed up my reasoning by seconding my logic.

It wasn’t until a meet up with a friend last month that my stance became askew. We talked about the vaccine and why he decided to get it. And because of the type of person he is, I began to think more deeply about my decision — but not enough to fully change my mind. And then, about a week later, the man that I’m seeing told me that he’d gotten his, too, and I found myself getting pushed closer and closer to the line.

The final straw was rumors that although no one was required to be vaccinated, there may be limitations and stipulations that would impact the folks who were not vaccinated, including a potential travel ban that would’ve possibly threatened a birthday trip I have planned with my mom for June. After seeing the news of that, I quickly logged onto the nyc.gov website and was surprised to find that the city was offering thousands of vaccines at various locations throughout the city and how easy it was to sign up.

Begrudgingly, I put my contact information into the system and next thing I knew, I was scheduled. In the days before my vaccine, I talked very little about the fact that I was getting it unless prompted, because I still wasn’t happy with my decision to go against what I’d believed. However, talking to my maternal grandmother specifically about how nice it was to be able to finally hug my cousins who’d already got it after a year of elbow bumps and loving stares, my ever-present dismay began to fade. If I wasn’t going to do it for me, doing it for my loved ones was more than enough.

The day of my first shot came quickly and I was not happy about it. As a child, I got shots recently due to aggressive food allergies, so I’ve never had a fear of needles. It really was just the principal of the thing that sent me into an anxiety-filled frenzy. I’ve never been one to do things that I didn’t want to do, and yet, here I was, walking into a gym and allowing military personnel to inject me — the scene felt like it was straight out of a movie where the premise was an alien invasion. The gold mylar balloons stating how many people had been vaccinated at that location, the “no photography or video” flyers posted on walls and chairs, the eerie silence — it all felt sort of mythical. Like if someone tried to explain the scene in 50 years, the future generation might believe you were embellishing.

All in all, the appointment lasted about 20 minutes, with 15 of those minutes being allotted for the waiting period following the shot so that you can be monitored. Everything moved expeditiously. In comparison to some other folks, my reaction was a walk in the park. I had soreness where the shot was administered, and I felt a bit more tired than usual, but nothing extreme, which I was very thankful for. I’ve had a week to reflect on the shot and also the journey to getting there in the first place, and while I still am not completely pleased with the decision I made to get it, I have no regrets.

A Millennial Voice : Journey to Me