A Millennial Voice: Meet Your Meat 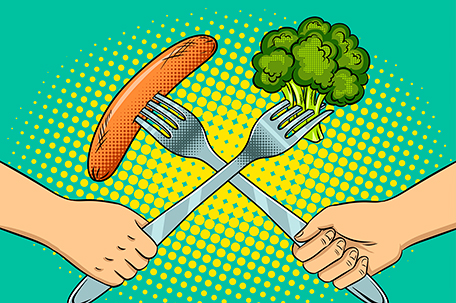 Our everyday lives have become inundated with many new trends, including some that aren’t so trendy. The emergence of the internet has encouraged people of all ages to challenge their traditional ways of life and to try new things that otherwise may have once seemed other-worldly. Some of the current crazes that have infiltrated our “day to day” are completely preposterous (i.e. the Tide Pod challenge, the cinnamon challenge, etc.). However, there are quite a few that aren’t so obscure.

Pythagoras is the first cited vegetarian in known history, but the practice of meat abstention dates back much further. The idea of a meatless diet hit the U.S in 1971 when Frances Moore Lappé’s book –“Diet for a Small Planet” — was coined as a best seller. However, the vegetarian/vegan lifestyle trend has only now begun to see a rise in popularity.

While vegetarianism and veganism aren’t yet fully mainstream, the push for plant-based eating habits is rapidly increasing. In fact, as of 2018, the percentage of people claiming veganism had grown by about 600%, according to GlobalData.

I believe that part of what’s caused the increase in food consciousness are documentaries like “Cowspiracy” and “What The Health.” Both were created within the past decade and can be viewed on Netflix. While neither film can claim to be  the first tell-all about the meat industry and how it has affected our ecosystem and our bodies, but from my standpoint, they’re the most relevant.

Up until recently, living a  successful vegetarian or vegan lifestyle presented many challenges, as meatless alternatives were often bland and had significant pocketbook implications, but the impetus towards a healthier lifestyle has created a whole new industry, and it looks like it’s here to stay.

The dangers of meat consumption are well known, but since becoming a vegetarian, I’ve found that most people would rather be in the dark about what they eat. The issue with the “I’d rather not know” mindset sparks two things: (1) tainted meat, especially red meat, has the potential to be a serious detriment to your health and (2) according to “Cowspiracy” the effect of meat cultivation is the main proprietor of greenhouse gases emitted in this country.

Not only are processed meats like bacon and ham more likely to cause cancer, according to the International Agency for Research on Cancer. A December 2013 Rolling Stone magazine article stated that “factory farming is considered one of the filthiest industries in America, producing an ocean of fecal matter every year.”

“Cowspiracy” also uncovered the fact that decomposing animals and animal waste emit toxic gas that pollutes our air and is the leading cause of species extinction, water pollution, and more. So, you can only imagine how poor living conditions affect the quality of the meat consumed.

To be quite frank, I gave up meat a little over two years ago following the release of “What The Health,” and I’ll never look back. Since ridding my diet of meat, my body is in much better shape and I haven’t had a cold since. The direct link that health has to meat consumption cannot be ignored.

Like gun control, global warming has become the topic of conversation, especially in the wake of the 2020 presidential election. In the past, the suggested fix for global warming has been to limit the use of natural resources, and while that certainly helps a little, the problem is much larger than that. The truth is, the meat industry is the principal link in the chain, and if we don’t contribute to absolving the problem, we will face repercussions.

In retrospect, much of the fallout from meat cultivation is unnecessary. On average, over a span of two months, the average person will use approximately 660 gallons of water to shower, which is also the equivalent of how much water it takes to cultivate a SINGLE hamburger. In addition, according to a May 2016 post on a Penn State University blog site called the Modern Studio, raising livestock in the US utilizes about 36-74 trillion gallons of water annually.

Scientists have predicted that by the end of 2025, the number of people living in countries with total water scarcity will reach upwards of 2 billion. Shouldn’t everyone have access to water? We only have six years.

Whether you choose to eat meat or not is totally your choice, but I must say that it’s important to consider the outcome, if not for yourself, then for the world in general. Having a meatless –or even a meat-limited –diet can decrease your carbon footprint significantly. If you do choose to continue to eat meat, buying ethically sourced meat can also reduce the detriment that meat cultivation has had on this country/the world in general.

Some argue that “vegetarian/vegan-wielding” documentaries are propaganda, and while that may be partially true, facts are facts. Do with this information what you will.

If you’re interested in learning more about the meat industry and its effects, some good places to start are:

“Water Sustainability and Animal Agriculture”. The Modern Studio. Published, May 3, 2016

WHO: Processed meat linked to cancer; red meat is risky, too