A Millennial Voice: Lana Patel on race, sexuality, and intersectionality 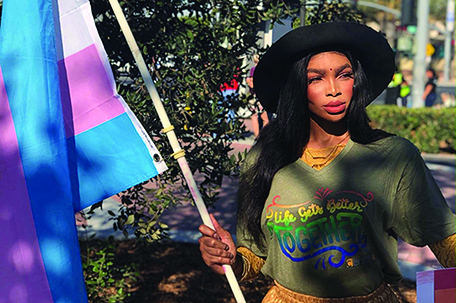 Lana Patel began her transition as a trans woman 13 years ago at the age of 17 and has gone on to accomplish many things that some of us can only dream of. The irony in this is that she’s constantly fighting for her right to exist and for others to believe that she deserves to. As a Black trans woman, her experience differs from that of many other Black women, but because we inhibit a culture that often errs on the side of “erasure,” you may never know that there is a difference to begin with.  This is the second in a two-part series about conversations with Black trans women.

DR: Tell us a little about yourself, your name, and your story..

LP: I’m Lana Patel and I’m an Afro Indo Caribbean trans woman from NYC that started her transition back in 2006 at the age of 17. I currently live in the greater Los Angeles area. I’ve had to learn how to navigate the world as a Black and Brown first generation American within the trans and LGBTQ experience. It certainly hasn’t been an easy journey, as I didn’t have a road map. I didn’t have someone to model myself after, or any inclination as to how to find myself in regard to intersectionality.

DR: Tell us a bit about the marginalization you face and the ways in which you’ve overcome it. Furthermore, what is it like to be you?

LP: Marginalization comes in many forms. I’m often the only trans person in the room for anything major, often the only Black person as well. California has a smaller Black population, so it’s understandable, but sometimes marginalization comes with being tokenized. Being a cis-passing trans woman affords me the ability to enter spaces I normally wouldn’t have access to, which is a good thing. But it’s a sad thing, as passing is so important for survival and acceptance in society. Too often as those who aren’t as oppressed are the ones making the decisions for the majority [of] Black trans women. I’m silenced generally because those in power and privilege exert theirs knowingly and unknowingly to diminish my voice, which is sometimes infuriating. I work to overcome it by calling folks out on [their] actions, educating them on how they can be true allies —  how we can really work together to make necessary change. It’s not easy, but I continue the work.

DR: The protests that we’ve been seeing over the past month have brought up a lot of conversation about the ways in which the Black community has habitually failed its women and its LGBTQ+ population, (the transgender community specifically).  So for you, a Black trans woman, in what ways can our community better service you? How can we be better allies to the trans community?

LP: This movement is powerful and ironically started by women, femme and queer folks. However, oftentimes those same people are lost in the message. As a Black trans woman, the community could do a better job of acknowledging us. Fighting for us. For every murder of a Black cis person, there are one or two trans folks whose lives go by unnoticed. Speak up and speak out for us. Keep that same energy when our lives are taken. Educate each other on inclusion. Understand that just because you’re Black, it doesn’t mean you can only fight for cisgender and hetero-normative folks or issues; that there are members of the LGBTQ community within the Black  community and our lives are being taken in large numbers every year.

Ways to be a better ally: Call out on homophobia and transphobia when you hear it and see it. It’s absurd that we call it a phobia, when the result often is violence. There’s a fear that stems from a lack of knowledge surrounding us. It’s time to dismantle sexism and misogyny. When we see trans women as women and they treat us as such, we can make a move to become even greater allies.

DR: This past week, Black men have been called on to do better as far as the Black woman is concerned. What has your experience with Black men been?

LP: My experience with Black men has been interesting. I love Black men. I come from Black men, but I also fear Black men. Most of the Black trans women killed every year die by the hands of Black men. I’ve witnessed firsthand how different trans women are treated compared to cis women. I’ve witnessed firsthand how different Black cis women are treated to Black trans women. There is a huge difference there. Trans women aren’t given the respect we deserve within this society. We live in fear as we saw with Iyanna Dior in Minneapolis, just how cis Black men handle us. I don’t want to generalize, as I know some beautiful and gentle souls but I would be remiss  in not mentioning the fear of surviving in a world where Black men are targeted, but then the same men who [we] go out and march for, turn around and target us. It’s a hard place to be in, for sure. I want to see black men uphold, honor and protect the Black woman.  All of us. Not just the cis women. Understand that we’re queens! We’re your mother, sister, auntie, grandma, cousin, etc. and we take on the world. Our battles should be with you all, too.

DR: We’d love to hear about some of your accomplishments and things you’re proud of.

To learn more about Lana Patel and her various projects, visit her Instagram page at: @LanaPatelXoxo .

A Millennial Voice: Time with Andy Jean – The journey to forward movement

A Millennial Voice: Millennials On the Move: Dr. Elizabeth Holder