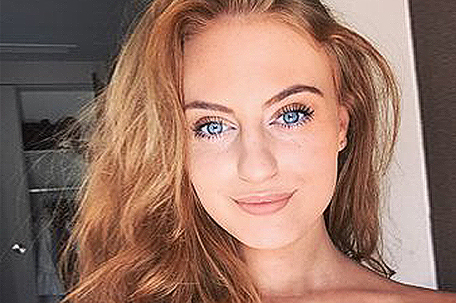 Gretel Munday’s fiery red hair and piercing blue eyes showed me her personality far before she could utter a word. With a strong English accent and an exceptional talent in tow, I knew immediately that I was in the presence of someone special.

The 23-year-old actress and model was born and raised in the county of Essex, England. However, for the past year and a half, she’s been living in New York City, working towards fulfilling her dream of a successful acting career. Prior to her move to the States, Munday had never been to NYC, but insists that she loves the city and feels that she was “born to be here.”

Munday — who’d been introduced to musicals by her parents early on in life –always knew that she wanted to be an actress — a desire that never wavered. She recalls falling in love with acting after seeing an emotional performance of the play “War Horse” and never looked back. From that moment on, she knew that she wanted to use her acting prowess to change people’s lives for the better.

“Acting is the one thing in my life that I’ve kept so consistent with and am really committed to,” she said.

Though Munday’s parents knew of and supported her dreams of becoming an actor, they were still relatively shocked when she revealed that she’d be moving to the United States to attend the American Academy of Dramatic Arts. Her decision to move to America alone was not an easy one, but she believes that it’s the best decision she has ever made.

“I want to stay here forever. … honestly, I see so many different ways my life could go from now and the lovely thing is that since living here, the spontaneity of the city has been so nice for me to not have a plan for my life,” she said. “I don’t know how it’s going to go, but I’m going to work my socks off and hoping for the best.”

Munday’s passion for her craft and drive to be her best self is remarkable.

Since moving to America, she has committed her time to aiding in the betterment of our country both on and off the stage. She’s modeled for several photographers and has acted in numerous productions, but her interests don’t just stop there. Munday had also found joy in immersing herself into American sports, networking, socializing, and to lending her voice and opinions to the political arena.

“I am such an advocate for politics,” she said. “I really do love it, so much that I’ve actually made it my goal as well to attend as many things as I can. I feel like I have to make a change. I don’t want to leave this world how I found it, I want to make an effort to help other people.”

In addition to the aforesaid, Munday has also learned quite a bit about herself as well. She feels that prior to her relocation, she was much quicker to judge, but states that being here and experiencing so many different people with such diverse stories has opened her up significantly.

“I’m shocked at the cultural vibe honestly, and I do really love it,” she said. There’s so many exceptional people here, and they’re not just American! Every single part of my day is so different and the people I talk to have their own story to tell that I would never know. That’s what I love about America in general.”

Munday plans to learn more about the beauty and history of the United States through the use of travel and self-education. Washington D.C falls at the top of her list of places that she wishes to visit in the near future, but she’s also looking forward to traveling to places like Colorado and Philadelphia as well.

Furthermore, she hopes to continue living in Manhattan and working in the arts, but is not striving for fame. Her goal is to continue to do what she loves while using her influence to invoke an emotional response from her audience and continue making this country a better place for all. Munday is not fully sure what her future will look like as of yet, but she anticipates building a full life in America.

“I wake up happy everyday because I live in New York, in this country. … I’m grateful that I have the opportunity to do what I love every single day.”

A Millennial Voice : The Highway to Freedom

A Millennial Voice: The Gift