A Millennial Voice: Confessions of a holiday enthusiast: COVID edition 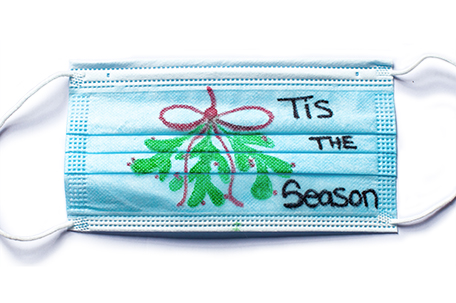 New Year’s Eve 2019 feels so close in distance, just as much as it feels light years away.

“5, 4, 3, 2, 1… Happy 2020!”, is still such a familiar sound in my psyche that it’s hard to fathom that it was nearly a year ago that my friends and I welcomed the new decade with a jubilee of wine, and positive affirmations for what was to come. The general atmosphere spoke to the positive change and prosperity that many of us commonly wish for our lives, but what met us on the other side of those private and public manifestations was nothing like what we expected.

The term “2020 vision” was often referenced before the year even began, but it soon became apparent that this “vision” was cut short by atypical tragedies and a pandemic that we were not prepared for.

Coronavirus cases and the conspiracies that paralleled the pandemic grew like wildfire. One day everything was “normal” and the next, any concept of normalcy became a fable.

However, I’ve learned — this year especially — that there’s only so many blows a person can take. Missed birthdays, the lessening of my out of home social life, and a shift in general functionality didn’t result in internal gloom for me as it did for many others, but the holiday season seems to be my undoing.

When the pandemic first started, it was easy to believe that the problem would just one day “go away” as swiftly as it came. Sentiments stating that there was no way that COVID-19 would still be around by summer, and furthermore, that there was no way that it would threaten the end of the year holiday season, were two sentiments that I both heard and naively clung to at the onset.

Nevertheless, we now know that both premonitions were unfounded and that neither Thanksgiving or Christmas are the same as before.

Again, I held out hope that Thanksgiving would happen, and initially, it seemed that everything was in order to do so until the numbers began to spike again, thus forcing my family to cancel the holiday.

And then a few weeks after that, someone very close to me tested positive for the virus, obligating them to self-quarantine on the top floor of my parents’ sizable Pennsylvania home, leaving my parents and I confined between the first floor of the house and our basement/my father’s man cave. Aside from being cut off from the entirety of the house I love so much, I also wasn’t able to stay in my childhood room, (as it’s on the top floor), and my parents and I were relegated to wearing masks in the house 24/7.

All that was left to celebrate on the actual day was my quarantined relative, who couldn’t leave the top floor; my mother, whom I ate dinner with; and my father, who ate dinner alone in his man cave.

The spirit of somberness filled the air and there was nothing any of us could do about it except sit in. And to add insult to injury, watching my family, who comes yearly from all over the tri-state area to celebrate my favorite day of gratitude, in their own respective homes, eating dinner and snapping photos online and via Zoom was the ultimate cloud that ruined the parade. I spent a lot of that day sulking and am more than happy that I was able to push through.

The idea that the holidays would be taken away wasn’t something that I was prepared for, but it has allowed me to address my privileges in a way that I both have and have not before. And although my time visiting home wasn’t anywhere near what I expected nor what I wanted it to be, I still remain blessed and thankful for the time I did get to spend with my parents and our dog Cody.

Holiday season this year — for  me — mimics a nightmare in my humble and earnest opinion. But the spark in me still has a semblance of hope that next year’s holidays will be better, and God willing, my family and I will be here to see it.

Please wear your mask and do your part to stop the spread.

A Millennial Voice: What New York has taught me during the COVID-19 crisis

A Millennial Voice: The life of a college senior in the time of COVID-19