A Millennial Voice : Chad Murdock’s ‘Fingers in The Wind’ 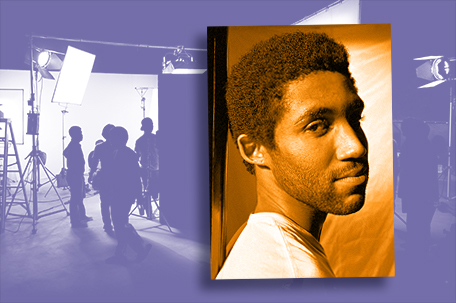 Chad Murdock is more than just a film director. He is an innovator with an intrinsic eye for detail, who has an adept ear for sound, and possesses a knack for storytelling that is quite unparalleled to anything that I’ve personally witnessed first-hand.

Murdock, 24, was born and raised in areas surrounding Philadelphia, which is where he initially fell in love with films as a spectator. As an adolescent, Murdock ventured off into many different arenas,  including the youth choir, the theatre, music creation and production, photography, basketball, and more — all of which have played an integral role in shaping him into the filmmaker that he is today.

Murdock attended the School of Visual Arts in Manhattan, and has since received a BFA in filmmaking. During his undergraduate tenure and even prior to it, he spent much of his time creating stories and films where emotion permeates the scenes and captivates the viewer or reader. His scholarly approach to film production has given him a unique voice, making his work fresh, recognizable and gripping.

With an undeniable talent in tow, Murdock has completed several films, some of which have received global recognition and can still be found on his Vimeo channel. His most recent film, “Fathers and Sons” (2019), is perhaps the most notable personal project to date. It worked as his senior thesis and has been played on public television networks, has been viewed by a sizable audience at the Hiway Theatre, and is still streaming on multiple platforms to this day.

Furthermore, to add to his ever-growing list of achievements, Murdock has also composed, directed, produced, written and/or edited works for several high-profile brands including Nike, Facebook, Proenza Schouler, and Valentino. He has also worked on several music videos.

For the past two years, Murdock has performed as a filmmaker for Wieden Kennedy, but his fervor for film creation is still very much intact, a fact that is made evident by the announcement of his newest and first feature length film, “Fingers in The Wind.”

Murdock describes “Fingers in the Wind” as an ambitious and mysterious coming of age story that takes place over the span of two days and closely follows the lives of a 25-year-old Black woman by the name of Faye and a nameless Black man of that same age. The description of the project seems to posit young adult life, (specifically), and emotion as a conundrum.

I suspect that the film will thematically explore the ways in which memory, desire, friendship, heartbreak, and other accompanying themes either aid or hinder the process of understanding the former.

As someone who has closely followed Murdock’s creative journey, I am nothing but certain that  “Fingers in the Wind”  will evoke thought and raw emotion for all of those who view this film. His keen attention to detail, paired with his love of creation and his hands-on approach in every facet of the filmmaking process, is evident as is his storytelling, and is guaranteed to be a refreshing treat for the audience.

In a recent video announcing this new endeavor, Murdock so graciously invites us to be a part of the process, stating that “this film is for and about all of us and [we] need your help to make it.” He goes on to talk about how he cautiously curated the perfect team of people to be a part of bringing this film to life, and because of that, desires to pay them adequately.

Aside from paying the cast and crew for their time and efforts, Murdock also needs assistance in paying for any extenuating costs that come from the mere production sector as well. He has set up a crowdfunding campaign on Seed and Spark and is looking to raise a sum of $25,000 to fund this project.

To learn more about Chad Murdock, visit: https://www.cinemachad.com,where you will find a host of amazing projects he’s worked on, and if you’d like to support this young brother by donating to his campaign, please check out https://seedandspark.com/fund/fingers-in-the-wind#story,where you will find his announcement video, a short description of the film, and a place to easily make a donation.

“Fingers In The Wind” does not yet have a release day, but filming  is scheduled to start very soon.

A Millennial Voice: To Duo with Love

A Millennial Voice: Quarantined – How one artist managed to turn lemons into lemonade