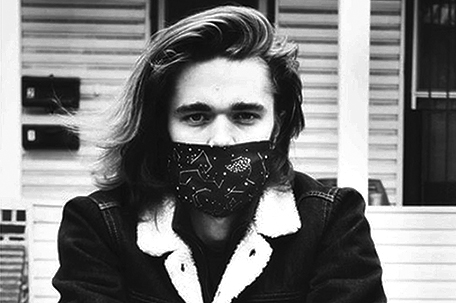 Ryan Shuler is a filmmaker and editor based in Brooklyn, New York who has been extremely vocal about the current movement and the work he is doing to dismantle the myth of whiteness and fight against racial,homophobic, and transphobic pedagogy. His status as an educated able-bodied middle class White man has afforded him the utmost privilege, so it wasn’t until a recent protest that he experienced firsthand how incredulously violent some police officers can be.

DR: What is your understanding of activism and what does the word mean to you? How has that changed since the beginning to the recent protests?

RS: I like this question, because it’s an important one to ask yourself and others when conversing about things like Black Lives Matter.  For me, activism is constant action rather than an isolated moment of allyship.  In this context, it’s the difference between being non-racist and anti-racist.  Sure, you could be against social injustice, but what are you doing to actively fight against social injustice?

DR: Per my experience, the idea of having privilege vs. not having privilege is a concept that confuses people. Speaking to issues of race specifically, there are countless White people who do not believe they have more privilege than Black people because of the conditions they were raised under, socioeconomic status, etc.  Now, things seem to be changing as the spread of information has become less tedious and considered more essential, but there are still some White folks who do not believe that White privilege is real. As a White man, please explain your understanding of White privilege.

RS: From my point of view, someone who holds White privilege is someone who never has to worry about being denied basic needs, services, or opportunities based on the color of their skin. If someone holds White privilege, it’s not as though their life isn’t difficult, it’s just that their life isn’t made MORE difficult because of their skin color. The concept of it is absolutely reprehensible yet this is the reality we’re facing.

DR: Furthermore, when did you realize that you had privilege? And was it a hard truth for you to accept?

RS: I think I became more fully aware of my privilege starting in the early 2010s when the shootings and deaths of people like Trayvon Martin were happening.  I admit that moments like Barack Obama getting elected made me think we were finally entering a post-racial society, but as I witnessed Black people like Trayvon Martin, Eric Garner, and countless others being murdered by police officers, I began to realize that racism is still alive and well. It was only just this year that I learned about systemic racism, and I feel like [it] helped tie everything together for me.

DR: Conversations surrounding the protests and the issues of White supremacy have fizzled out, but the issue is still very pertinent; how are you using your voice,influence, and privilege to make sure that these stories do not get lost?

RS: Something I have thought about is my experience of living in a small town and not meeting or knowing many Black people in my life growing up. I’ve become more aware of the fact that many Black people will be denied homes in suburban or rural areas because of their skin [color], which often creates a sense of unfamiliarity between White and Black people. That being said, I’ve been doing things like writing letters to the elementary, middle, and high schools I went to growing up and asking them how they plan on enhancing education on Black History and how they will discuss systemic racism to their students. I want to help the issue at large by looking to the roots of the issue.  I also make a point to call out people for their racism wherever I see it.

DR: A few days ago you were at a protest where police officers became extremely rowdy and violent with peaceful protestors. We’ve seen police turn to excessive force against activists recently, and it seems to only be getting worse. As a White man, what was it like to have that violence that Black people have endured for years, directed towards you?

RS: Even after Occupy City Hall, even after every single protest or march I will ever go to for the rest of my life, I will never fully understand what it means to live life as a Black person. In light of the recent Occupy City Hall brutality (where one person, for example, broke their leg when an officer pulled a barricade away from them) and all the videos I’ve been watching of Black people facing atrocious harassment and brutality by police officers, it’s made me feel very uncomfortable –very uncomfortable knowing that this is what Black people go through in their everyday lives. One of the messages that was spray-painted on one of the buildings near City Hall read: “Racism isn’t getting worse, it’s getting filmed.” I believe, also, there was a lot that I knew when it came to racism and police brutality, but didn’t want to admit to it, because it felt inconvenient or uncomfortable, but not anymore. Sacrificing one’s convenience is more than worth it in the name of social justice, it’s necessary.

DR: I’m curious to know what has changed in you/changed about your life since the eruption of protests and the influx of activism, regardless of race and gender, last month?

RS: There’s a quote that has been passed around on social media which I feel like fits with how I feel during this whole movement: “It’s a privilege to get to learn about racism instead of experiencing it your whole life.” I feel ashamed for not having learned what I know now sooner, and I still have much, much more to learn, but I feel grateful for having “woken up” to what’s going on and actively working against this form of hatred that has been ingrained in our country for centuries.  I do believe in a future where we all live in harmony together; it will just take a very long time of political gameplay to get there.

The advice offered in this column is intended for informational/entertainment purposes only. Use of this column not intended to replace or substitute for any professional, financial, medical, legal, or other professional advice. If you have specific concerns or a situation in which you require professional, psychological or medical help, you should consult with an appropriately trained and qualified specialist. This column, its author, the Philadelphia Sunday SUN newspaper and publisher are not responsible for the outcome or results of following any advice in any given situation. You, and only you, are completely responsible for your actions.