A Millennial Voice: A seat at the table 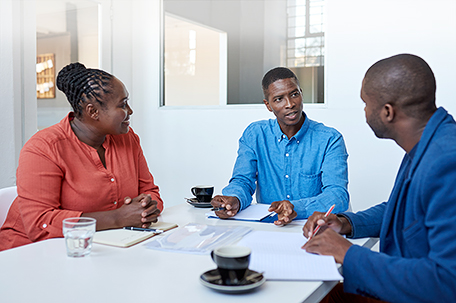 This past weekend, I was fortunate to be selected as part of a focus group for an up-and- coming makeup brand that is looking to diversify their under-eye concealer shades. It was one of the most simple yet amazing and fulfilling experiences of my entire life thus far.  It was the first time that I was given the ability to have a say in product design on such a big scale and something that I will never forget.

For the sake of this article, I will refer to the brand as “K” in the interest of protecting the company’s anonymity and privacy while they develop the aforementioned. However, I felt that I’d certainly be remiss if I didn’t take this opportunity to write about how pivotal that moment was for me. As a Black woman with a medium brown skin tone, I’ve found that it’s been “easy” for people like me to be overlooked, and I never really paid attention to it too much because I don’t wear makeup. However, this experience showed me exactly why I should.

When I submitted my name for consideration, I didn’t think too much of it, but was impressed that a brand cared enough to seek out “real people”. I received an email that I was selected the day after the initial submission, and a few days later I found myself sitting in a cold Manhattan studio with popcorn in my hand, surrounded by 10 other beautiful people of varying skin tones, ready and willing to talk about whatever “K” wanted to know. The next hour and a half we spent together proved that there was a lot to be said.

Upon entry, the first thing I noticed was that the vast majority of the participants were women of color — in fact, there was only one other person in the midst of participants that was 100% white, which is VERY rare. Truthfully, I expected to be one of the only Black women in attendance —  a typical scenario — but was pleased to see that that was not the case.  “K” is owned and operated by a brown woman, so I suppose the fact that all but one of the participants was a woman of color should’ve been expected, but even in an ever-changing world, you still never know.

As soon as all participants arrived and were seated, we got right into talking about our personal experiences with makeup, our experiences as people of color as it pertains to makeup and beyond, some of the skin concerns we had, our thoughts on pandering and being marketed as an inclusive feature in advertisements, and so much more. To hear the stories of people like me — and even hearing stories from those who weren’t — was such a humbling experience.

During our open discussion, we were taken back one by one to have the existing concealer shades closest to our skin tones tested on us, but if you’re like me and your face has multiple different tones, they made a concealer that was mixed to perfection to match you individually. So, not only was my opinion and experience validated through this, but the uniqueness of my skin was also vindicated as well. It felt like a dream that I didn’t know I had. Through this, I learned why I have a hard time finding a concealer or foundation that matches my skin perfectly. It’s because I have more olive undertones in some places on my face, which many makeup brands don’t take into consideration. It’s not the average undertone for a person of my complexion.

So many of us had stories about knowing that the opinions of people like us weren’t considered during the creation of many different products, which led it to being a bittersweet moment. Bitter because of the reality of circumstance, but sweet because there we were, literally occupying a seat at the table, enacting change and being a part of forward movement. As a consumer, regardless of what you look like, you want to know that you were thought of and that your hard-earned money is going towards a brand that represents you. Unfortunately, that typically is not the case.

I’ve noticed, as I’m sure you have, that there has been an influx of small businesses created by people of color over the past few years. The reasons vary, but at the core, especially when it comes to beauty/skin care/clothing brands, it’s usually due to a lack of recognition in whatever industry they sought to buy into. The market is fluctuating to be “more inclusive”, but the efforts seem slight and unintentional, which is what brands like “K” are seeking to obstruct.

At the end of the session, we all reveled in the fact that it was amazing to be in a room, filled with people of color, giving our input. Historically, that hasn’t been the case, but now that I’ve been in that space, I want to advocate that more brands sponsor something like it. Regardless of who you are, being heard is so important for confidence and really solidifies your existence in a way that can’t accurately be put into words. Along with those nine other strangers, our thoughts have hopefully created a shift in an industry that habitually casts us out; as we all know, influence usually comes from the smaller brands and shifts outwards.

For my first time in a focus group, the experience was paramount, life changing, educational and freeing.  To be surrounded by a group of my peers, a group of brown and Black people with such different lives but such similar concerns, to have left with both new knowledge and friends, to have a concealer created based on my particular skin concerns was enlightening. I’m just so eternally blessed and grateful for the experience and hope to see more rooms like the aforementioned in the future.

A Millennial Voice: Luxe for “Us”