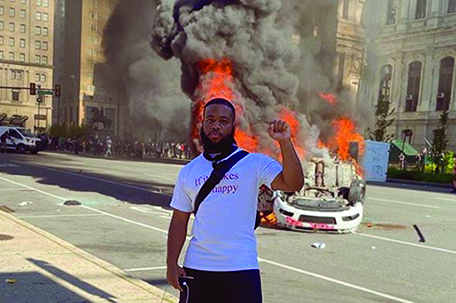 From East to West, protests targeting police brutality in light of recent and not so recent events have taken over the nation. In the past two weeks, we’ve seen protests in every American state, as well as in other countries.

The chant “Black Lives Matter” continues to ring as the fight for justice continues. I was not able to attend the Philadelphia protests myself, but I felt that it was important to speak to someone who did.

Judah Klein, a Black man from Cheltenham, Pennsylvania was present when the peaceful protests took a turn. Here’s what he had to say about his experience of being Black in this country and his thoughts on what he witnessed in  Center City.

SUN: In the wake of everything that’s going on right now, how are you feeling as a Black man living in such a racist,white dominated society?

JK: You know what’s crazy? A part of me feels scared and vulnerable, but another part of me feels powerful. I’m scared and vulnerable, because I know the thoughts that society has about me and people who look like me because of the color of our skin, but I also feel powerful though because when you’re Black, people see and feel that s**t! They want to be like us and have our style and features. I feel proud to know that we are the blueprint. .

SUN: When you heard about the protests going on in Philly, what were your immediate thoughts?

JK: My immediate thought was I had to be there. I knew I couldn’t know about it and not be there. It’s [what] so many people truly believed in and was passionate about, that I had to do more than just speak about it.

SUN: I’ve seen people speaking out about how peaceful the protests in Philly were, and then I’ve seen others say how mentally draining it was to be there. As someone who attended, what was that experience like?

JK: Being there was such an experience! You could really feel the pain and passion everyone around you felt regarding the cause. We all had the same goal and it was amazing. When I first got there it was super peaceful. People were holding up signs and chanting — then the police started pushing, shoving, and macing people, and that’s when people started to fight back. It was a lot and I can see why people can say it was draining — being out there and participating took a lot out of me.

SUN: The looting and rioting vs. protesting and conversation has been in the forefront lately. Do you think that the conversation is divisive, conducive, or a mix of both?

JK: I think it’s a mix of both, honestly. I think the media “the news” tried to distract people from what was really going on and what people were really protesting for. I was out there when the looting started, and when I tell you the people who started it was not Black. … It’s crazy, but most people did follow suit. It almost felt like it was staged. The cops were also literally a block away watching people loot and did nothing. It almost felt like they wanted it to happen so they could spin the narrative.

SUN: That photo that you took in front of the burning police car is so powerful. What was going on in your mind when you decided to capture that moment in history?

JK: So in that moment I knew I needed to capture it because of everything that happened prior. I was with everyone when things were peaceful. We marched, we chanted, and we spoke up, but we kept it peaceful. However, when things got crazy between the peaceful protesters and the cops, the protesters got fed up and when I took that picture, in my head it symbolized us being fed up and not stopping the fight until we get equality and justice!

SUN: What would you like to see change as a result of the protests going on right now? Do you think things will change? Explain.

JK: It’s crazy because one of the things people wanted to change in Philly especially was that they wanted the statue of Frank Rizzo taken down. Some people tried to literally take it down themselves. For the people who don’t know the things he did and his history, just know that I believe the statue should’ve never been put up. I urge you to look him up and read about the things he did to the Black community. So seeing that the mayor had it taken down was a huge win. But over all, I just want justice and equality for my people. If cops were held accountable and locked up for killing Black people, they wouldn’t feel so comfortable mistreating and killing us. I don’t want to have to fear for my family, friends or kids when they encounter cops. They are in place to “protect” us so we shouldn’t have to fear them and they shouldn’t have to fear us. So hopefully after all this, it’s a new dynamic between Black people and cops — A good and healthy dynamic.

A Millennial Voice: Time to Pretend: A Woman’s Dream