A Millennial Voice: A conversation with author Denzel Jones and the creation of his new novel, ‘Band of Seven: They Never Wanted Us to Be Heard’ 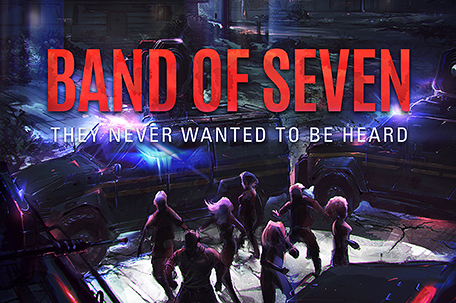 Denzel Jones is a 25-year-old author from Paterson, New Jersey. His love for writing comes from his theatrical background. In high school, he began writing plays, which gave way to his ultimate career path.

Jones is a lover of life, and believes in living it to the fullest, doing whatever he can to feel fulfilled. His book — “Band of Seven: They Never Wanted Us to Be Heard”— is a culmination of all the years of hard work that he has dedicated to his craft.

SUN: Your book, “Band Of Seven: They Never Wanted Us To Be Heard,” mixes the elements of the supernatural with societal issues that are extremely prevalent today. We’ve seen something like this before in the movie “Bright,” but the medium is still relatively untouched. What drove you to mix the two, and why do you think it’s necessary?

Denzel Jones: It actually started off as a mystery, a mystery revolving around people with supernatural abilities. And super and uncommon abilities are interesting. It’s fantastic, and visual, and cool. And “Band Of Seven” is really, really visual if nothing else. But I’m a Black man living in America. I go on social media and I engage in posts [and] threads. There I’m challenged, baited, [and] trolled all the time. So it just sort of blended naturally.

But not just [in] “Bright.”There’s also “X-Men” and other Marvel movies where the characters have powers. So they were definitely inspirational. I knew that X-Men is like a mirror for the Civil Rights Movement and minorities, but in my opinion it doesn’t reflect the Black experience. So as I was re-crafting  I said ‘Okay. How can I make this story more Black? And how can I make it more relatable?’Because I’ve heard people say X-Men is about Black people. No disrespect to the franchise  because I love it but, no, it isn’t.

That’s why in some scenes in “Band Of Seven” you have the preternaturals fearing the “sound cannons” getting turned on them; like how protestors used to get the hoses turned on them. There’s a scene that mirrors the Sandra Bland pullover. That’s my favorite chapter. It’s so moving and it involves the fan favorite, Cree. She’s a badass. While the book mostly highlights the Black experience, half of the main cast are of different ethnicities. Melanesian. White. Hispanic. You can actually look them up on bandofse7en.com. There you can see portraits of all the characters, their bios, and even purchase a poster of them.

I think this story is totally necessary because of the time we live in now. It’s a reflection of society — our mistakes, how we view ourselves and each other.

SUN: One could say that taking such heavy elements and adding a supernatural element could dilute the seriousness of the issues you touch on in the novel. Was this something that posed a difficulty during the writing process?

Denzel Jones: Not at all — because the topics sort of go hand in hand. In most mediums that feature characters with powers, they usually face some sort of discrimination, so the way I see it, you can’t really get the super abilities without the injustice aspect of it. I also didn’t have that problem because I didn’t heavy hand any one side. I didn’t lecture, but I made sure not to give too much [to the] supernatural. There’s a lot of dialogue and social commentary. There’s a lot of action as well, but it’s really character driven. You get different insights on so many issues. And all the characters are partially based on different people so you really get to see how serious things are for some and how serious they aren’t for others.

SUN: Amazon is a huge means of income for independent booksellers these days, but with the COVID-19 crisis  a lot of shipments have been stalled indefinitely. How has this affected your business?

Denzel Jones: Amazon and I are having issues right now, actually. They’re not reporting all of my sales, so I’m missing out. But they’re not the only distribution channel, so I’ll be okay without them. Right now, both the e-book and the paperback are available on the Barnes & Noble website.

SUN: How hard is it to craft such a complex novel with such complex characters?

Denzel Jones: To be specific and give them different quirks and make their voices distinct, very difficult. But to craft them was fairly easy — and fun! Because they started off based on my favorite characters from some of my favorite shows (“Friday Night Lights,” “The Secret Circle,” “Prison Break”) — and when I get into a show, I really get into it. Then, as I further broke them down and gave them personalities, I began molding them after myself — different sides of myself. The slang I use I would give it to one character. The way I tilt my head when I’m confused, I gave that to another. I got accepted to St. John’s, so I made that school a goal for one of the characters, things like that. I even go deeper and give some of them my secrets.

As for the world, it wasn’t too hard, because their world is like ours. It takes place in the year 2050, but there’s nothing too crazy. There are amphibious and gliding cars. The technology is more advanced. And there are laws regarding the preternatural beings that exist there. For the most part thought, I wanted it to be realistic. Oh, yeah — and The Hall Of Fame/Infamy! I think that’s a really cool concept that readers will love.

SUN: Do you have any new books coming out in the near future?

Denzel Jones: In the near future, no. I have some books that I definitely will write, but I want to finish this series first. I’m still working on the plot for the sequel, but I already know which themes I want to use. I have a lot of ideas. I’ve been immersed in a few different cultures over the past two years, and I’d love for them to be represented in a few ways. I’ve been watching documentaries on tech, so I want to add them in along with my ideas. And I have some new laws that mirror our dark history (*cough* Jim Crow *cough*) that I want to add in. I purposely left out so much and I left so many question marks, because I want fans begging for more. I have a whole universe to expand upon.

SUN: Where can we find you?