A Millennial Voice: A chat with filmmaker Christl Stringer about her new film ‘Sweetie’ 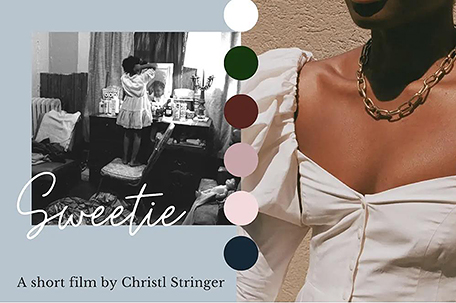 Pixar’s “Turning Red” led to a lot of controversy over about whether or not talking about periods in a children’s movie is appropriate, which is probably why according to menstrualhygieneday.org, approximately 58% of women feel shame around their periods.

Christl Stringer is a New York-based figurative surrealist and filmmaker who’s been aware of this discrepancy for quite some time and made the decision to address the nuances of Black girlhood/womanhood in her newest film “Sweetie.” “Sweetie” is a story about a young Black girl getting her period for the first time and figuring out how to navigate that space.

DR: Congrats on getting your new project, “Sweetie,” greenlit! I love the premise of the film and it made me think about my first period. Being that talking about periods is such a taboo, how did you stumble on the idea to make this into a whole film? What “thing” sparked the project?

CS: This film was inspired by thinking about my own first period story. I don’t actually remember many details, mostly how I felt and how I continued feeling about menstruation until my twenties. Every year I feel like I learn something new about reproductive health that I wish I knew 5-10 years ago.

After talking to people about my idea for the film, I realized one main thing too many people think they know everything. People told me 10 years old is too young to get a period. That may be true from an emotional standpoint, but kids are menstruating younger than previous generations. There is no “too young” when the evidence is already in your pants. So this film is for kids who got their period and didn’t know what was happening because no one thought to tell them yet.

DR: I’m so bad at coming up with titles, but I really love yours! So I’m curious to know, why “Sweetie”? How’d you land on that?

CS: The name Sweetie came to be because it’s kind of a nickname, and nicknames live in two categories. The first is endearing, when it comes from someone you respect and love. The second is repulsive, when it comes from someone who doesn’t know you on that level but even then it all depends on the delivery. It could be a grocery clerk or a man at a bar. The film is about puberty and changing bodies, so the fact that people try to comfort you and become hyper-focused on your body is supposed to be flattering, but really it makes you feel invisible and you want to repel it. Also, the tooth fairy is obsessed with candy.

DR: How difficult was it to place yourself back in young Christl’s shoes to tell this story the way she needed to hear it when she first got her period.

CS: I don’t know if it was difficult to think about young Christl because she is always with me. But I asked my friends that are the same age a lot of questions for time period purposes (2006-07) like about Tamagotchis and particular technologies. It wasn’t lost on me that the recession started shortly after the film takes place either. So it is also a pre-recession film? Documenting a very specific childhood that can’t quite exist anymore.

DR: How personal is this new project to you? What questions, if any, does it seek to answer? What truths do you hope to expose?

CS: This is my most personal film. It also definitely asserts what I want to say as a filmmaker and about Black girlhood/womanhood. While doing research for this film, I even learned that there is a whole academic field called Black Girlhood Studies. So other people (mostly Black femme academics) are thinking about Black girls too! As a filmmaker, I’m really interested in how genre can be utilized to effectively tell a story.

There are a lot of familiar elements in this film like Christmas and Santa but once you add in menstruation and the tooth fairy, it’s a new type of magic. When putting together the trailer for this film, I really struggled to find comps that seemed relevant and had dark-skinned Black girl leads ages 9-11. So this film is for dark-skinned Black girls, first and foremost.

DR: Do you think having different conversations surrounding sex, puberty, and things of the sort will have an impact on intergenerational and different gender/sex relationships? Why or why not?

CS: Whenever I talk about the concept of this film with people, they automatically start talking about their first period story or another person’s story. So people want to talk about it. My mom helped raise some money for the film by talking to her coworkers and handing out business cards with info for the film, and most of them had horror stories about feeling ashamed when they first started menstruating. Most of her coworkers are baby boomers and early Gen X and their stories made me think of people my age who also have stories of being ashamed, so there is definitely some disconnect — especially since that is the generation that raised us. Generations of menstruators feeling ashamed when they get their first period — where does the cycle end? Even the social media response to Disney’s “Turning Red” lets us know that late Gen X/Millennial parents still don’t want to or know how to talk about menstruation with kids. All the trauma is there and it gets stirred up every once in a while like dust. But it doesn’t have to be that way.

DR: Talk about the mysticism and the innocence directly tied to Santa and the tooth fairy that made those two characters’ key components to the maturation/development of this story.

CS: I never believed in Santa, but I did believe in the tooth fairy. [Belief] may be a loose term, but I dutifully put my teeth under my pillow until they all fell out. The tooth fairy was the only mystical person (Easter Bunny, Sandman, leprechauns) that I could imagine with any real-life expertise outside of her job. Then I thought of her not having her wings yet, because they sort of develop when they develop, like body hair.

I also conceived of a concept where there is a network of tooth fairies dispersed around the globe. I would actually love to make a feature film about tooth fairies — one day…

Santa was actually the last piece of the puzzle because I needed the mom to be busy so the girl would have to trust/use the tooth fairy. Then I realized I like the tooth fairy and Santa having this unspoken understanding of committing to protecting the girl’s innocence and childhood.

To learn more about this project check out Christl’s “Seed and Spark” campaign at https://seedandspark.com/fund/sweetie#story

A Millennial Voice : Chad Murdock’s ‘Fingers in The Wind’