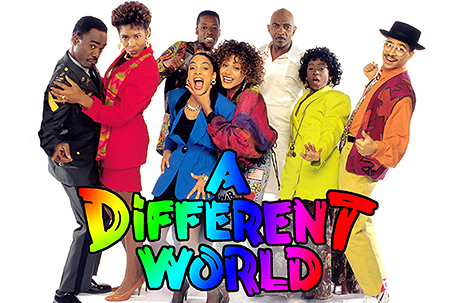 The “Cosby Show’ spinoff, “A Different World” (ADW) premiered on NBC on September 24, 1987, and although that literally feels like a different world ago, the show’s cultural impact lingers.

The fictional Hillman College solidified its place in my heart during my freshman year of college in 2015, and I immediately fell into a binge. The show, that was initially created to follow Denise Huxtable through her college sojourn, allowed me to see an authentic combination of Black pride and education for the first time. Because I’d attended a predominantly White suburban high school with “uniformed” teachers, it was also the first time I genuinely considered the importance of Historically Black Colleges and Universities.

I’ve recently finished my fourth bender, yet I remain inspired by its rawness, as if I’d never seen the show before. Every binge brings about a new journey or a new lesson that I didn’t pick up before. “A Different World”, to me, is like your favorite ride at an amusement park… you never get tired of the curves even though you’ve been through them before. I’m intrigued by the 31-year-old show as a millennial and now college graduate because everything is still so pertinent. Aside from the show’s undeniable panache, part of what makes ADW so unparalleled is the positivity that’s carefully strung through every episode, its all-encompassing portrayal of Blackness, and its unapologetic willingness to “go there.”

Over the years, fans of the show have attested to being encouraged to enroll in college due to the aforementioned, but also because of the academic excellence that producer Debbie Allen made so appealing. And although that was not the case for me (because I’d never watched ADW prior to college), watching the show during my first year of school encouraged me to give my college a chance when I was contemplating transferring.

Regardless of whether you attended a PWI (Predominantly White Institution) or an HBCU, every college student can relate to at least one character on the show. I saw pieces of myself in almost every character throughout my time in college. For instance, I wanted my relationship to be the epitome of Black love like Dwayne and Whitley’s. I wanted straight A’s like Kim Reese. I wanted a hangout place like The Pit along with Mr. Gaines. And most importantly, I wanted a genuine bond like the one shared between the dynamic crew. They inspired me to do more. They inspired me to be more; and even though I graduated college almost a year ago, I am still inspired by the show.

I recently watched the series again, but this time it was through a different lens and with an even greater admiration. As a post grad, I watched through the lens of actually having lived their lives. I watched them work through their struggles and realized that I’d made many of the same choices. I watched Whitley and Kim’s relationship blossom, much the same way mine has with my best friend. I watched Ron become a member of a fraternity and laughed at the references made with pledging; this time, though, I understood a little better, since I too pledged a Black Greek Letter Organization (Delta Sigma Theta Sorority, Inc). I watched them become political in the fight against apartheid and thought back to the time when I worked the polls and attended political rallies on campus. I watched Dwayne and Whitley’s relationship go through trials and tribulations before landing in wedded bliss and realized that relationships don’t just happen, you must do the work for them to survive. Yes, this time I watched with fresh eyes and it filled me with hope. The show is powerful. In fact, I even briefly considered going to graduate school after having absolutely no interest in furthering my education at the present moment. But you see, that’s what the show does. It preaches to you without being preachy.

I ‘m always left wondering if those who worked on “A Different World” understood the impact that the show would have over the years. The way ADW tackles themes including varying Black identities, going away to school, triumph/tragedy, Black love, friendships, Greek life, growth, colorism, heartbreak, divorce, acceptance, abuse, sex, race/racism, sexism, politics, and more, gives fans the representation and indulgence that many of us crave. Every time I watch the series, I never want to believe the end is near. ADW feels more like family and less like characters on a television show, and I must admit, I somehow always miss them. Ordinarily, I’m completely against reboots as I feel that they’re often uninspired, but in this case, I’d vote yes in a heartbeat.

Events at AAMP: Gardens of the Mind: Echoes of the Feminine View On view now through January 16, 2018