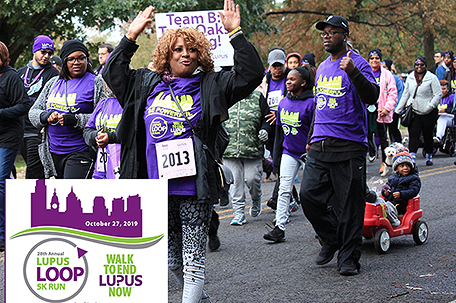 The Lupus Loop is the oldest lupus walk in the country and has grown significantly since its birth in 1991. In its inception, the number of participants peaked at roughly 300 people, but according to Beverly Haas, the chapter’s president emeritus, they’re expecting approximately 5,000 participants at this year’s event.

Supportive community members, family members, friends, and even strangers gear up every year to attend the fundraiser, rain or shine, in support of the cause.

Lupus, which translates to “wolf” in Latin, received its name during the 13th century when a physician by the name of Rogerius likened the facial abrasions to that of a wolf’s bite. However, the first documented case of this autoimmune disease was recorded by Hippocrates in 400 BC.

With such a long history, one could easily assume that there’d be a high awareness around this disease, but sadly, they would be mistaken. There are an estimated 1.5 million Americans affected by lupus and it’s also one of the leading causes of death amongst young women ages 14-44.  Still, the disease remains a mystery to many and there are several likely reasons as to why.

Lupus has no known cause, is often described as heterogeneous, unpredictable, hard to detect, and frequently misunderstood.

Immediate past board chair Cheri Perron, who is living with lupus, shared her story with me, stating that “it took [her] seven to eight years and six doctors to get an accurate diagnosis… it masks itself as so many different things. I had doctors tell me that I was making it up because they had difficulty figuring out what was wrong.” Sadly, her story is analogous to that of many others.

Lupus symptoms mimic other diseases which can make it hard to diagnose. There is no known cause or cure. The effects of the disease also vary from person to person. Some common symptoms include a butterfly shaped rash across the cheeks, sensitivity to light, painful or swollen joints, extreme fatigue, hair loss, and anemia. If you believe that you or a loved one may be experiencing any of the symptoms above, you should see a rheumatologist.

At the present juncture, there’s only been one drug that’s been both developed and approved by the US Food and Drug Administration for  lupus treatment ; as of right now, there is no permanent cure for the disease. It is for these reasons that fundraisers like Lupus Loop are vital.

Lupus Loop 5K Run and 2.5 Mile Walk to End Lupus Now aims to do exactly what it states in its  name. The mission of the fundraiser is to help improve the quality of life for all persons affected by the autoimmune disease through raising awareness, providing support and advocacy, conducting research, collecting funds and more.

There are many different ways to support both the organization and those living with lupus. If you’re interested in donating to/ participating in the Lupus Loop on October 27t, 2019, please visit:   http://support.lupustristate.org/site/TR?fr_id=1040&pg=entry for more details.

“You must be your own advocate, always” – Cheri Perron ( living with  lupus).

Lupus’ disproportionate impact on women and minorities must be known