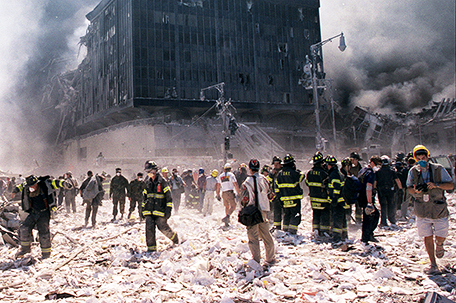 ABOVE PHOTO: New York City firefighters and journalists stand near the area known as Ground Zero after the collapse of the Twin Towers September 11, 2001 in New York City.

Twenty years ago, I was 5 years old and in kindergarten. I remember that I wasn’t hugely fond of math, but I enjoyed spelling and drawing/art especially. My inclination to create was fostered in that classroom, and a lot of who I am now was developed during that 2001-2002 school year.

It was a regular Tuesday morning in September — nothing unique or special about the day, except for the fact that it was particularly chilly that morning and that my mother had sent me to school with some cans of Chef Boyardee ravioli to donate. I guessed that our class was collecting food donations, and that thought was confirmed by the stack of cans I saw on the table upon entering the classroom.

“What if all of those cans fell down?” my 5-year-old brain thought and then I went on about my morning as usual.

The start of the day was always reserved for breakfast time. I don’t recall eating anything in class that morning, but I do remember the CRT-TV with its big behind, locked in on PBS. I always loved my desk in that classroom because it had a direct view of both the television and the glass doors, which reminded me that there was a world outside of school. I’d often switch my gaze between the two.

If I’m not mistaken, the show that was on the television at the time was “Between the Lions,” which was one of my favorites. The theme song, the character, and the educational lessons were all the makings of a great, kid-friendly educational show that was both intense and innocent. However that day, something happened that changed the nature of it. In the midst of a particularly great episode came a horror scene that didn’t fit the story line. One second, we were watching puppets sing, and then the next there were planes, crashing into the building leaving behind it a smoggy ether.

Boom! I remember the sound of the planes hitting the twin towers so vividly, and I’d venture to say that 9/11 is my first complete memory. None of us understood what was happening; I don’t even think the teachers did. Why had the channel changed? Maybe they were wondered if they’d accidentally changed the channel to something that we shouldn’t be seeing. But no. News circuits took over the public television channels, thus making the reality of the day inescapable.

The gap between the towers crumbling down and my mother coming to pick me up remains a blur, but her frantic disposition, which countered her typically smoothed state, was all I needed to understand that something really bad had just happened. She picked me up, threw me in the back of our truck, and we were on our way home. On our drive home we’d passed a friend’s parent who was equally frantic.

She was rushing to pick up my friend and I remember her and my mom’s brief exchange about how thankful they were, for their children, for themselves, and for their husbands. By that time, it was understood that 9/11 was a terrorist attack — my father had been working in a federal building in Philadelphia and I can’t even imagine how she felt that day, not being able to get in touch with him but also having to keep two young children calm.

Thankfully my dad was alright, but I remember feeling nervous about his whereabouts as well even though I hadn’t fully understood the gravity of the moment.

The days prior to 9/11 and the days following are not vivid to me at all, but the instant change that it’d had on the nation was felt. News outlets talked only of the damage done and the lives lost on that day for what felt like years.

As we commemorate the 20th anniversary of the 9/11 terrorist attack, I’m left reflecting on how that day changed my personal life and also how it affected this country and the world in general.  9/11 is a day that I will never forget and on this anniversary of one of the most confusing days on my life, I send my thoughts and prayers to the families of the fallen first responders, workers, and the other lost persons that haven’t been identified or found.