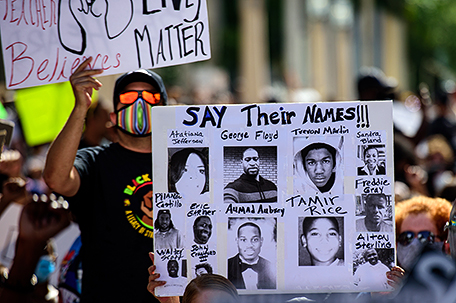 The ruling rang and reverberated through the airwaves and in my mind like a clanging cymbal.

In two short words, my life was forever changed. The evidence was there. We were seeing it straight on, not through a glass bottle, but through resin. How could the world not see this injustice for what it was? Were they blind? I was a month shy of 16 at the time of Trayvon Martin’s murder, and not fully understanding my feelings or how to react, I contained my rage and pushed it deep in my psyche, only for it to be awakened time and time again as this country perpetually and purposely failed its Black and Brown population.

Although I was fortunate enough to be brought up through an award-winning, white dominated school curriculum prior to the killing of Trayvon Martin, it was “subliminally” posed to me that racism was a thing of the past and that I had no reason to worry. Now, I recognize the message that was sent was more of an “affirmation” than an accurate teaching.

The message that was really being sent was, “The monstrosities of the past were of the past; However, now, if you’re a good Black person, you have nothing to fear…” . We feed our children these lies to shield them from the truth of our existence, but does that help them or cause them harm?

Now, here we are, less than a decade later, and the senseless killing of Black and Brown people at the hands of police officers persists. Thankfully, social media has been an incredible tool in publicizing these monstrosities and encouraging a national outcry. But what we’ve seen in recent months as a response to the recent killings of George Floyd, Breonna Taylor, and Ahmaud Arbury is nothing like I’ve ever seen before. The outrage us Black folks feel is cosmic. It’s generational. We carry the hurt of our ancestors on our shoulders, in our hearts, in our DNA, and on our backs. And White people can sense it too. They’ve spoken out in droves in a way that has never been done before.

The fact that our community still has to fight to prove that we deserve to live in the midst of a pandemic that has disproportionally affected Black people and other communities of color is a perfect encapsulation on what it’s like to be Black in the United States.

Black people have collectively had enough, and a population that has been silenced in its peaceful efforts to obtain freedom will always ultimately do anything to ensure that they are both seen and heard.

Because of this, protests have erupted all over the world and this country specifically is on fire. And even in the midst of all of this, excessive force is still being administered —  in the midst of peaceful protests, including the use of tear gas in the midst of a pandemic that is centered on respiratory complications.

How telling is it that the powers that be would rather have chaos, than validate the lives of Black people. This country, which was built on rape, perjury, looting, violence, white supremacy, white nationalism, elitism, classism, indoctrination and more is beginning to crumble in front of our very eyes. The world as we knew it will never be the same, but it seems that this could be a good thing.

No matter what your role is in all of this, and despite what your identity may be, it’s important for us all to continue to use our voices in the best way we know how, and to educate ourselves  about Black history, reliable sourcing resources for ourselves and others, signing petitions, protesting, supporting Black businesses, and fighting for justice.

Black lives matter, and I will continue to fight until everyone believes it.

Here are some resources and local organizations to consider donating to:

There are hundreds of others to check out. I encourage you to add to the list and share with your friends and family.

A Millennial Voice: The Gift

An Open Letter to My City