A Bit of Political Minstrelsy 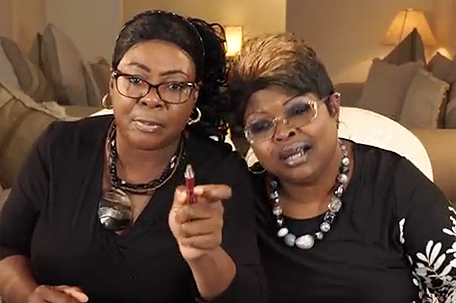 Or, what I observed sitting through the Diamond and Silk Show.

Most of the time when I cover political events, all that’s needed for me to get in is my name and an RSVP to the person handling communications for said event.

But when I went to a campaign event for Scott Wagner, the Republican vying to become Pennsylvania’s governor, I needed a state issued ID. That is until they found out that I was a member of the press. Suddenly, folks backed off from that.

(Having a Secret Service credential from a National Convention tends to do that.)

Last Friday night, I found myself at the Hilton City Line at Wagner’s event featuring Diamond and Silk, the two Black women who made a name for themselves in the 2016 Presidential campaign by being Donald Trump’s biggest Black fans. The first time that I saw them up close was during the Republican National Convention in Cleveland, where they decided to have a debate with newsman Roland Martin.

(Go on YouTube and punch in “Roland Martin+Diamond and Silk”. You won’t be disappointed.)

The sisters, Lynette Hardaway and Rochelle Richardson, were there as part of an event that I can only surmise was designed to bring Black folks into the Republican camp. I mean, it also featured Tracy Fisher, an ex-offender and Democrat who said he’s voting for Wagner because he believes that Republicans will be better for the community.

But if that’s what anyone got out of that, they’re better than me.

What I got was a chance to see was (a) what “fill-in-the-blanks” political campaigning looks like and (b) just how much of the soul of two women $25,000 can buy.

To fully get the Diamond and Silk experience, you have to start by imagining what it would look like if Madea, the pistol-packing church mother that actor/director/writer of really bad scripts Tyler Perry announced that he was shutting down this week, had an equally outrageous twin sister with whom she went on political tours.

And even then, you might not get the full picture.

First of all, most of the performance from the South Carolina natives had nothing to do with Pennsylvania. With the exception of eventually getting the crowd to chant “Tom Wolf Is A Wolf In Sheep’s Clothing”, much of what Diamond and Silk said was the same kind of red meat that Republicans get thrown nationwide.

From sanctuary cities, to the caravan heading north from Honduras due to American foreign policy (oops that’s me putting some context to what they said), to two of the Republican Party’s two favorite bogeymen, California Congresswomen Nancy Pelosi and Maxine Waters, and just about every other lie that Trump has been telling since he came down from his Trump Tower apartment in 2015, Diamond and Silk didn’t give anyone any reason to vote for Scott Wagner.

As they did a question and answer bit with Wagner after their initial performance, you could tell that they didn’t know a whole lot about him, what he stood for, or any of the issues he would face should he become governor of Pennsylvania. It was as if they were paid to be there.

That’s because they were. Twenty-five thousand dollars to be exact, according to a campaign finance filing from the Wagner campaign.

The kind of Blackness that buys into just about every stereotype of pre-Civil Rights Movement Blackness you can come up with.

Their neck rolling was the kind of stuff that might get them one step closer to getting that move declared an Olympic sport. There was also the kind of eye bugging you might see on an episode of “Amos and Andy” or “The Little Rascals”. There was a sing-song delivery that featured a lot of sound effects.

It was kinda painful to watch.

Especially since the audience lapped it up and laughed it up.

If you’re a Black person who is conscious about the images of Black folks, watching Diamond and Silk come close to blackface in the name of political minstrelsy will disgust you and want them thrown off the stage. Especially since it seems as if they know that this is what’s going on and continue to do it anyway.

Until Friday night, I didn’t realize that the going rate for two souls was $25,000, but apparently, it is.

For Diamond and Silk, I hope it’s worth it.