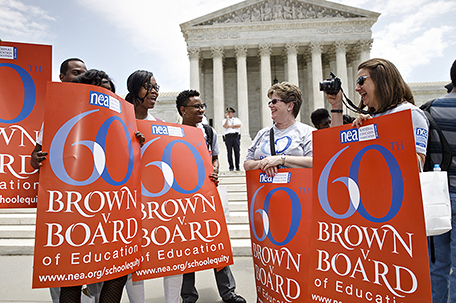 ABOVE PHOTO:  National Education Association staff members from Washington joining students, parents and educators at a rally at the Supreme Court in Washington last week, May 13, 2014 on the 60th anniversary Brown v. Board of Education decision that struck down “separate but equal” laws that kept schools segregated. Saturday marks the 60th anniversary of the landmark Brown v. Board of Education decision. Many inequities in education still exist for black students and for Hispanics, a population that has grown exponentially since the 1954 ruling.  (AP Photo)

Much was made about the UCLA Civil Rights Project study released on the eve of the celebrations commemorating the 60th anniversary of the Supreme Court’s 1954 Brown v. Board of Education school desegregation decision on May 17.  The study found that the legions of school districts in the South, West and North are more segregated than at the time of the Brown decision. But studies like this that have found that many school districts that have re-segregated have been numerous over the past two decades.

The studies all have one added thing in common: the students in these schools are poorer than students in predominantly, or exclusively white schools. They do far worse in reading and math tests than non-black or black students at racially mixed schools. The black and Latino students who attend racially isolated schools are not in these schools because of Jim Crow segregationist laws, or failed school bussing policies. Two decades of pro-integration court decisions, limited bussing programs, civil rights legislation, and the election and the appointment of soaring numbers of blacks and Latinos to boards of education have racially remade public education. Black and Latino public school superintendents and top administrators are now fixtures in most urban school districts.

The blame for the chronic school re-segregation is the deep persistence of housing discrimination, poverty, and the near universal refusal of federal and state courts to get involved in any more school desegregation cases. The Supreme Court put the cap on the court’s role as a facilitator of integration in 2007 when it struck down school bussing plans in Seattle and Louisville. Then there’s the continuing flight of white, as well as black and Latino middle-income persons, to the suburbs. This ensures that even more poor black and Latino students will be perpetually trapped in segregated schools.

The hodgepodge of panaceas that conservatives delight in ladling out to raise minority achievement levels include school vouchers, a wholesale dump of incompetent teachers and bureaucrats, magnet schools and annual testing. Some districts advocate scrapping race altogether and using income and other indicators as the means to achieve racially balanced schools. However, even in the school districts where they have been tried, the results have been mixed. There are many low achieving students in charter, and magnet schools, as well as schools that have opened the doors to school voucher plans just as in some public schools.

Even if the Supreme Court had upheld the Louisville and Seattle integration plans some years ago, it still wouldn’t have changed the racial picture for most urban school districts. The bitter truth is that while segregated public schools will never again be the law of the land, they remain a fact of the land, and the overwhelming majority of black and Latino students will be stuck in segregated schools. And in those schools that appear to be racially integrated there’s less than meets the eye. Studies show huge gaps in the treatment of black and Latino students by teachers and administrators. They are more likely to be piled in special education and vocation classes, and suspended or expelled at far higher rates than white students.

This points to the second problem that civil rights advocates and politicians refuse to acknowledge. It’s that even segregated schools don’t have to be inherently failing schools. There are countless examples where teachers and administrators have rolled up their sleeves and worked hard to transform racially segregated schools from permanent monuments to educational failure to models of success. They fight hard to upgrade the texts and facilities, to get administrators to purchase more computers, and to get the highest caliber teachers, counselors, and administrators possible at these schools. They demand that teacher unions actively work to enforce strict professional standards to hold teachers at failing inner city public schools accountable for the performance of their students.

Most important, they have buried the myth that black and Latino students can’t or won’t learn. During the nightmare years of legal segregation, polls showed that blacks prized education above everything else, and regarded it as their children’s passport out of poverty and segregation. Generations of black and Latino students attended de-facto segregated inner city schools and legally segregated schools in the South. Most graduated, went on to college, and became successful in business and the professions.

Teachers were dedicated and determined that their students attain excellence in their studies. The teachers expected and demanded that their students perform up to the same level as white students. They challenged the students to learn, set specific goals, and fully participate in classroom work, and gave them positive and continual direction and reinforcement.

America is a nation of diversity, and it will get more so in the years to come. The schools will be too. But even those whose students may never sit in a racially mixed classroom can still be shining examples of student achievement for black and Latino students. It just means that school districts will have to be more creative in how they attain it.