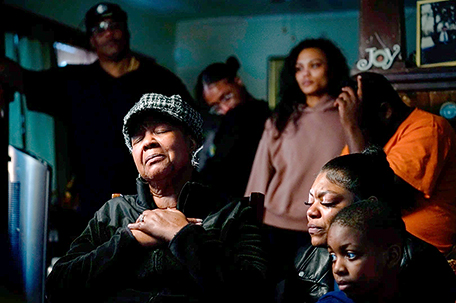 ABOVE PHOTO: JoAnn Daniels, left, accompanied by Kayla Jones, second from right, Donell Jones, right, and other family members, takes a moment to gather her thoughts during an interview with The Associated Press about her sister Celestine Chaney, who was killed in Saturday’s shooting at a supermarket in Buffalo, N.Y., Monday, May 16, 2022. (AP Photo/Matt Rourke)

THE BACKGROUND: The story of racial equity in the United States took many forms in 2022, and reporters for The Associated Press found novel ways to bring new issues to light, including fallout from the reckoning over police violence, tribal rights and justice, and a new wave of antisemitism.

Members of the AP’s Race and Ethnicity team look back on a year of important stories.

Race continued to be front and center in 2022, two years after protests against the police killings of George Floyd and other Black people sparked a racial reckoning. In Washington, Congress passed the Emmett Till Anti-Lynching Act enabling the prosecution of crimes as lynchings if they are committed during hate crimes in which the victims are injured or killed.

The midterm elections brought more racial progress as Asian Americans, Black Americans, Latinos and other groups made strides in electing candidates who represented them. Race also was at the center of the push for voting access as Native Americans and other communities worked to ensure that elections were fair and equitable.

The climate around race wasn’t all promising, though. At the polls, threats to democracy remained. The year also saw its share of hate in the form of racial violence and antisemitism.

A white gunman killed 10 Black shoppers and workers at a Buffalo, New York, supermarket. In New York City, a white man was charged with hate crimes after several women of Asian descent were violently attacked. Some celebrities and other prominent people made anti-Jewish comments, causing fears that hate is being normalized.

Other obstructions to the racial reckoning happened inside the classroom. Teachers trying to incorporate culture and racial history into their lessons faced scrutiny from conservatives about centering education around race, gender and sexuality.

We are seeing a real retrenchment from a willingness to address racial inequality. In everyone from politicians to corporate leaders, the willingness that they were expressing sort of went silent. And not only that, we even saw elected officials who were running on promises of racial equity use “middle of the road,” less bold language around some of the things that they had previously been bold about, like police reform. We went from, “We need to address the history of racial inequality in our law enforcement systems” to “I don’t believe that we should defund the police” and “we should fund the police.” So there was a very different tone.

On the attack on Black shoppers at a Buffalo, New York, supermarket:

MORRISON: Prior to the Buffalo shooting, I had experience covering the Charleston church shooting trial. It allowed me to understand the deep pain that is often left in the wake of mass shootings. And so coming into Buffalo, I went in knowing that I wanted to highlight how that particular shooting shook that community to its core. I also wanted to make sure, as the AP told the stories of this community, we did not lose the fact that this was a targeted, racially motivated attack. It had to be written with a bit more nuance and context so that people could understand the significance of it.

This shooting, in particular, really exposed just where we were as a country, in dealing with things that often are not really hidden at all, but are in plain sight. There are people openly expressing hatred towards groups online, and that there isn’t really all that great of a system out there catching and or preventing these types of massacres from happening.

On what’s facing Native American communities throughout the U.S.:

FELICIA FONSECA, who is based in Flagstaff, Arizona, and covers Indian Country:

The issues facing Indian Country are so deep-rooted and intergenerational: How do tribes ensure the future of their language or culture and their people? And if we’re thinking about COVID, the impact that has had on the ability to survive.

There are some very basic needs that the rest of the U.S. doesn’t often struggle with — running water and electricity, broadband access, the fact that a lot of roads on reservations just aren’t paved. One of the lingering things from the coronavirus pandemic is the extent to which the funding that came to tribes is going to help with those things, and put tribes on par with the rest of the U.S. or just be kind of a step above where they were. And there’s a lot of hope right now that those things will materialize.

But tribes also recognize that a lot of this has to do with politics and dismantling decades of bad policy. And we see a lot of changes now with the Biden administration, and especially with having Deb Haaland, the first Native American to serve as Interior secretary, in laying the groundwork for what it says will be lasting change.

There is no other Interior secretary who understands Indian Country the way Deb Haaland does. It’s a significant step toward getting those things that that tribes have been working for. Yet some tribes still don’t feel heard.

There’s still issues with polling sites being far from tribal reservations, receiving mail at P.O. Boxes when there’s not enough boxes for all the people to receive mail in some tribal communities. We saw Native voting advocates step up on the amount of people they have watching to make sure that these elections are conducted in a fair and equitable way. And establishing hotlines, having extra lawyers on hand to make sure that they can file any complaints as needed on Election Day.

On the Washington Commanders finally changing the name of the team from a racial slur:

The story was really how this advocacy built up over the decades. It wasn’t about, “Washington did the right thing and changed its name.” Washington did this because it was pressured to do this. Native communities will tell you it was a series of things, it was big companies pulling out financing for the team. And it was the death of George Floyd. This was just the moment in which Washington couldn’t say no anymore. And so I tried to bring into that story, the decades of effort from Native communities to change that.

On a rise in antisemitism:

In order for us to make sense of what we’re seeing right now, we actually need to do a better job of defining what these things are. When people understand the hallmarks of antisemitism and racism, they can call it out unambiguously. They can say, “that’s racist,” “that’s antisemitism,” and explain why that is with clarity.

I think there are some racial dynamics to how antisemitism is addressed, when the antisemitism is coming from a person of color. We have been talking, in the last few weeks of this year, about Kanye West, Kyrie Irving and other folks who have been espousing really dangerous rhetoric. We need to do a better job of connecting the dots. There are risks to allowing such rhetoric to just fly, risks posed to not just our democracy, but to our safety as Americans. Allyship between Jewish and Black civil rights activists is storied. It’s historical. Liberation for one group could not happen the way it did, without the participation of the other group. I think if we continue reminding people of that history, in 2023, maybe people will realize this is not about divide and conquer. This is about right and wrong.

On why the covering the news through the lens of race and ethnicity is so important:

When I started covering tribal communities in my first days at the AP back 17 years ago, there were very few journalists who were focused on it. There weren’t a lot of resources going toward Native media organizations. That has changed with the creation of Indigenous Affairs desks that have focused on hiring Native journalists, which is super great. Of course, news leaders can do better.

I’m covering Indigenous communities as a Hispanic woman, so I’m thinking about how would I want people to approach my community? How do we do this in the most respectful way? What can we do to make sure that we have a good working relationship, that we’re not being extractive, that we’re ensuring that Native voices are included in the stories about Native people, that we’re elevating those voices? Are we seeking out Native scholars, experts, community leaders, and others with particular lived experiences?

In many communities, especially in communities of color, what I often find is that people will talk about what’s just happened. But then they also want to talk to you about what’s been happening for years, for decades in their communities. They’ll say the lack of investment, the lack of attention to inequity created the conditions for a predominantly Black neighborhood in Buffalo to have only one good supermarket. They want to talk about the things that they’ve been asking for, that they have yet to receive from their elected leaders. These are the leaders who have promised them progress many times, that things were changing, but they rarely do.

On what’s next for coverage:

Tribal leaders often say that words are sacred, and they expect the Biden administration to fulfill pledges it has made to uplift tribal communities and its obligations under treaties and other acts. We’ll be watching that as well.

We should not take our eyes off of the people challenging the very tenets of our democracy. Those who want to invalidate the vote of entire communities, if they don’t like the outcome. Those who are putting themselves in positions to control ballot casting, certifying results and pervert election laws. That’s a story that we’ve got to keep on in 2023 and 2024, because we’re not done seeing the impact of what’s already been done.

And one last thing that I’ll say about the racial reckoning: We’re not done seeing the backlash to that. The much-reported, much-discussed uptick in violent crime in 2022 was leveraged to turn back some of the reforms borne out of 2020. The backlash caused some elected officials to back away from pledges they made on criminal justice reform. That is going to continue to have impact in 2023, particularly as it affects communities of color.