The 2016 GOP Convention: The whitest of the whitest conventions 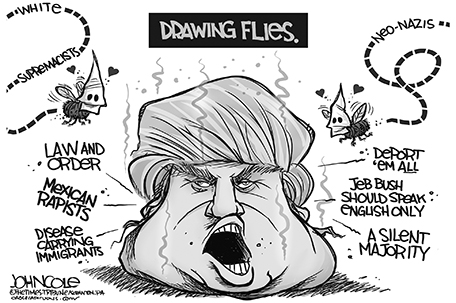 Calling the 2016 GOP convention the whitest of the whitest GOP conventions is not redundancy or a play on words. It underscores the fact that this convention, in comparison to the 2012 GOP convention and indeed a string of other GOP conventions going back in recent time, have been virtually lily white affairs. Start with the 2012 convention. Much was made before the start of that convention that former Secretary of State Condoleezza Rice, former Democratic Congressman Arthur Davis and Saratoga Springs, Utah Mayor Mia Love would be among the bevy of speakers at the convention. Much was also made that New Mexico Governor Susana Martinez, and South Carolina Governor Nikki Haley would also be prominent on the speaker’s dais. This supposedly was the GOP’s public rebuke to the loud charge that it was yet another good ole’ white guys confab. The charge was more than a charge it was a brutal fact. Blacks and Hispanics were the proverbial invisible persons at the convention. African Americans made up a paltry two percent of the delegates, and Hispanics only a slightly higher number.

It wasn’t much better four years earlier in 2008. Only 36 of the more than 2,300 delegates to that convention were black. The GOP by its lowest of low minority delegate bar looked positively like a minority’s champion in 2004 when the number of black delegates soared to a towering 167 number at that convention.

The 2016 convention may well plumb even deeper the depths in the number of minorities there. The tip-off is who is on the list of the dozens of speakers announced. More than 80 percent of those who will take the podium are white, mostly white males.

The chronic invisibility of minority, especially African-American speakers and delegates, at this year’s GOP convention is chalked up to Trump. That is his racially incendiary, immigrant, Hispanic and especially Muslim bashing campaign and rhetoric that got him to the top of the GOP presidential heap. This was on glaring and embarrassing display when one poll found that Trump got all of one percent of black voter support. Embarrassing because even Reagan and George W. Bush got about six percent of the black vote, and other GOP presidential candidate like Reagan and Bush no matter how conservative their credentials get around that percentage of the black vote.

The paltry number of blacks and Hispanics that turn up at the GOP conventions is much more than just a reflection of a GOP presidential candidate, Trump, who has run a virtual one-man hit campaign against minorities. And who has not so subtly aimed his hard pitch at frustrated, fearful, and angry whites, and worse unreconstructed bigots. It’s a continued hard indictment of the party that shoved him to the top. That’s on naked display in the Trump influenced 2016 GOP platform that calls for a tough crackdown on illegal immigrants, and comes dangerously close to endorsing Trump’s call for a border wall.

Trump, however, merely swims in the party’s longstanding, rancid, racially charged history and philosophy. The GOP is a party that promotes unabashed racially sneaky code words, a Southern Strategy and state’s rights. It would not be the political force it is in state and especially national politics, and would not maintain its firm support base in the Deep South and the Heartland states among white rural, suburban, conservative blue collar and male voters, if it wavered in defending its core racial turf. Even the few high profile black Republicans, such as Clarence Thomas, adhere to and fervently espouse the party’s hardline conservative attack points.

There is absolutely no room for them to deviate from them. Former GOP Republican National Chairman Michael Steele had a momentary inkling that simply having black faces spout the stock conservative line would never attract more than a bare handful of blacks to the GOP. On occasion he quipped that the GOP had to give blacks some reason to embrace the GOP. But Steele even as he said that Steele was already well on his way to becoming a casualty of the GOP’s steady march backward to its extreme right-wing stance on the issues. He was soon ousted.

With the spectacular surge of Trump there was little doubt that the GOP’s 2016 convention would play hard to white conservatives, and that the delegates to the convention would reflect their views. Trump’s virtually lily white key staffers, his selection of ultra-conservative Mike Pence as his VP running mate, and his raucous rallies before mostly white audiences were further glaring signs that the GOP convention would be a convention where minorities would be largely missing from sight.

The 2016 GOP platform reflects much of the Tea Party agenda. The staples again are: repeal the Affordable Care Act, slash government spending, downsize the federal employment, gut federal regulations on environment protection and laxly check on financial and corporate abuse. The convention platform is designed to rouse the GOP’s conservative legions and will wreak even more misery on minorities. The 2016 GOP convention again delivers on what the GOP has worked overtime for years to be and that’s the whitest of whitest conventions.

Earl Ofari Hutchinson is an author and political analyst. He is the author of Let’s Stop Denying Made in America Terrorism, (Amazon Kindle) He is an associate editor of New America Media. He is a weekly co-host of the Al Sharpton Show on Radio One. He is the host of the weekly Hutchinson Report on KPFK 90.7 FM Los Angeles and the Pacifica Network.

From the AP: Everything you need to know about day one of GOP convention