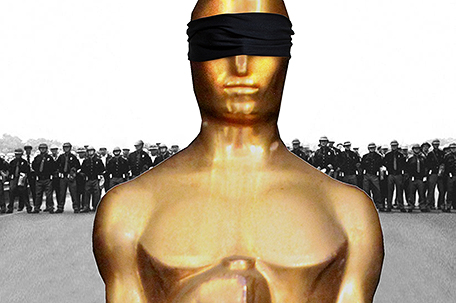 In a year in which the Martin Luther King, Jr. biopic, Selma garnered several Oscar nominations, including Best Picture and Best Song, it didn’t secure a single nomination in any of the acting categories nor did it get a Best Director nomination for Ava DuVernay, who was expected by many in the industry to be the first non-white woman nominated for best director.

At the outset, Selma star David Oyelowo appeared to be a lock for a Best Actor nomination. His uncanny portrayal of a young MLK had critics abuzz with praise. DuVernay was also expected to make Oscar history and become representative of a new, more open and diverse paradigm in Hollywood.

Film academy president Cheryl Boone Isaacs says the all-white acting slate inspires her to accelerate the academy’s push to be more inclusive. She also hopes the film industry as a whole will continue to strive for greater diversity.

The first black president of the Academy of Motion Picture Arts and Sciences spoke out recently in an exclusive interview with The Associated Press about the Oscar nominations and the widespread criticism that followed.

All 20 of this year’s acting contenders are white and there are no women in the directing or writing categories. After the nominations were announced last Thursday morning, the hashtag #OscarsSoWhite started trending on Twitter.

The Asian Pacific American Media Coalition issued a statement Friday saying the nominations balloting “obviously reflects a lack of diversity in Oscar voters as well as in films generally.”

Yet Boone Isaacs insisted the academy is “committed to seeking out diversity of voice and opinion” and that outreach to women and artists of color is a major focus.

“In the last two years, we’ve made greater strides than we ever have in the past toward becoming a more diverse and inclusive organization through admitting new members and more inclusive classes of members,” Boone Isaacs said. “And, personally, I would love to see and look forward to see a greater cultural diversity among all our nominees in all of our categories.”

Forbes Magazine critic Scott Mendelson issued a fierce denunciation of the racial politics that seemed to be at work within the Oscar voting committee.  “I am angry. I am angry because Ava  DuVernay deserved a nomination. I am angry because if the legacy of DuVernay’s Selma becomes shaped by its Oscar-season controversy, I fear that it will affect the artistic opportunities afforded to its African-American female director in a manner different than if Selma  would have come under fire under the directorial lens of a white male filmmaker.”

Filmmaker Spike Lee, perhaps America’s most notable African American film maker, critic and no stranger to being overlooked by the Academy, was vociferous in his criticism of the Oscar oversight.

“That doesn’t diminish the film,” he told the Daily Beast. “Nobody’s talking about motherf*in’ Driving Miss Daisy. That film is not being taught in film schools all across the world like Do the Right Thing is. Nobody’s discussing Driving Miss Motherf*&in’ Daisy. So if I saw Ava today I’d say, ‘You know what? F–k ‘em. You made a very good film, so feel good about that and start working on the next one.’”

“This isn’t a new phenomenon,” said film critic Cliff Harambulous of the British publication The Walthamstow Gazette. “Films by directors and producers of color in this country and the United States, with very few exceptions, have a long history of being ignored at awards time. And it doesn’t help that the American film industry is quite obsessed with producing disposable pabulum in lien of product of quality and reputability. The bottom line with the film making communities in both countries is box office receipts. It’s too bad that the American film making community, with all of its resources and supposed sophistication, would short thrift such an important film that highlights a pivotal moment in American history.”

On Thursday, white actress Jessica Chastain (also snubbed for her critically acclaimed performance in A Most Violent Year) gave an impassioned speech at the Critic’s Choice Awards bemoaning the film industry’s lack of diversity.

“Today is Martin Luther King Jr.’s birthday,” Chastain said. “It got me thinking about our need to build the strength of diversity in our industry, to stand together against homophobic, sexist, misogynistic, anti-Semitic and racist agendas. I’m an optimist and I can’t help but feel hopeful about the future of film – especially looking at all the beautiful people in this room. Martin Luther King Jr. said, ‘Our lives begin to end the day we become silent about things that matter.’ I would like to encourage everyone in this room to please speak up.”

Associated Press contributed to this article.