2 killed at J’Ouvert Festival: Is the parade more important than Black life itself? 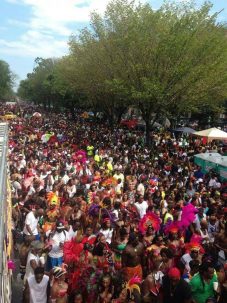 Is the parade more important than Black life itself?

All things were peaceful during the wee morning hours of Labor Day during Brooklyn’s J’Ouvert festival, the popular pre-dawn celebration and parade that precedes its daytime West Indian Carnival.

…Until gunshots rang out.

Four innocent persons were shot and two of them died including 22-year-old St. John’s University student, Tiarah Poyau, who was shot in the eye at close range while walking the parade route with friends.  Unconfirmed police reports are saying that Payou was accosted by a man and asked him to stop grinding on her.  He allegedly responded by shooting her.  He was later arrested.  In a separate incident, 17-year-old high school student Tyreke Borel’s  life was also claimed. He was shot and killed when a stray bullet struck him in the chest while sitting on a bench at the festival.  A 72-year-old woman was shot in the arm, fleeing the same gunfire that took Borel’s life.

The pre-dawn event has been celebrated for decades in the borough although it was not recognized as an official city event.  However this year, the city of New York granted 2016  J’Ouvert organizers a permit, making the event officially recognized by the city. The City of New York partnered with Brooklyn borough President Eric Adams and the New York Police Department in efforts to make the event safer.

Speaking on the aftermath of this year’s violence, Mayor DeBlasio said that ending the event had been “on the table.”

Some who are avid supporters of the event were infuriated this week at what they thought was the mayor’s implication to end the pre-dawn parade. Some felt the suggestion itself was racist. Some even blamed the police who stepped up their presence at this year’s pre-dawn activities due to last year’s violence at the celebration.

But, newsflash—law enforcement can only do but so much in situations where they are outnumbered by hundreds or even thousands.  Unless the festival turns into a full blown security operation such as those used in the Pope visit or the Democratic National Convention, law enforcement efforts are not a cure all when outnumbered.

In addition to the young lives senselessly lost, my concern centers around the lack of massive collective outcry and outrage by Blacks about the level of violence nationwide in our communities.

It’s as if we have the “Smh” Syndrome (shaking my head syndrome).  The “Smh” Syndrome is when we hear about countless horrific crimes and then are not moved enough to be collectively outraged to create meaningful change.  The only thing we feel we can do is shake our heads.

The silence is so deafening that it is a form of violence in itself.

As a person of indirect Caribbean descent I understand the cultural importance of our celebrations.  Many attendees of this event are promoters of peace.  They are revelers simply having a good time with friends and family while celebrating the culture.

DeBlasio has officially stated that J’Ouvert will continue, but he is considering changing the hours of the celebration.

Although the calls amongst Brooklyn residents and a handful of government officials are growing for the annual event to be suspended, I must pose some serious questions.

Why are some of us as Black people fighting against the idea of ending this pre-dawn parade when innocent people are getting killed?

How can we send a unified message that the value of the victims lives is far more important than a parade, political talking points and the revenue that this event may generate?

Is Black life only important when an act of violence is committed against someone in our community by law enforcement?

We are responsible for making sure our communities are safe.  I know it’s much easier said than done.  We in the Black community have to take the first steps on the long road to solving this problem.  This includes making our Black-on-Black crime epidemic a political agenda item.

Look how many causes and movements have been forced into the local and national election conversation this year causing candidates to re-structure their campaign priorities.

Hopefully more can be done, via additional collective efforts and partnerships, to prevent future tragedies at this event and others like it.

TV One features specials of the 2010 Essence Music Festival, Washington Watch and Life After, Aug. 29-30