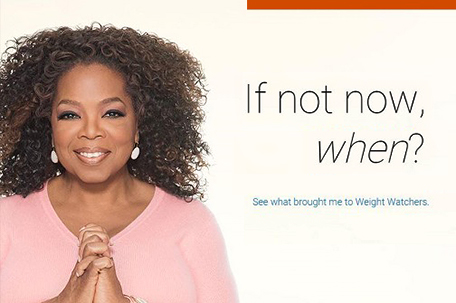 The company’s shares soared Tuesday after a new commercial starring Winfrey aired where she says she has lost 26 pounds on Weight Watchers. Winfrey said during an appearance on “The Ellen DeGeneres Show” that she started on the plan in August.

Winfrey bought a 10 percent stake in the weight-loss company in October. Its stock is up more than 90 percent since then. Winfrey is a natural fit for the company: Her struggle with weight was a frequent topic of her former talk show.

“I love bread!,” Winfrey says in the new commercial. “That’s the genius of this program. I lost 26 pounds and I have eaten bread every single day.”

Weight Watchers has also made changes to its plans recently to better fit in with Winfrey’s message of living a healthy and happier life, and not just focusing on weight loss.

Shares of New York-based Weight Watchers International Inc. rose 21 percent to $13.44 in afternoon trading. But they are still down about 21 percent from a year ago.