Warren has irked Obama before, but trade deepens their rift 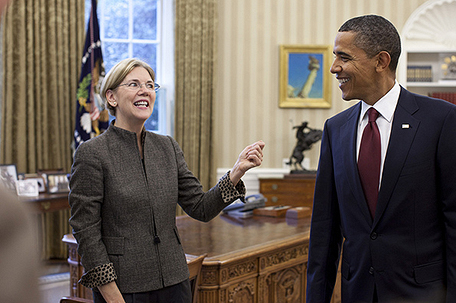 May 23, 2015 Category: Color Of Money Posted by: Philadelphia Sun Staff

ABOVE PHOTO;  President Barack Obama meets with Elizabeth Warren and her family in the Oval Office before the announcing her to the post of Assistant to the President and Special Advisor to the Secretary of the Treasury on the Consumer Financial Protection Bureau, during a statement in the Rose Garden of the White House, Sept. 17, 2010.  (Official White House Photo by Pete Souza)

WASHINGTON — When President Barack Obama huffed that Elizabeth Warren, the Massachusetts senator and established liberal star, was a “politician like everybody else” he revealed a rift that predates the current hostilities between the two Democrats over trade.

Though occasional allies, Warren has been aggravating the Obama administration since her pre-Senate days when she chaired an oversight panel charged with being a watchdog over the massive federal bank bailout.

But the dispute over Obama’s efforts to get trade negotiating authority from Congress and complete a 12-nation Pacific rim trade deal goes to the heart of a fundamental divide within the Democratic Party. It also has turned the tables in Congress where Democrats once delighted in watching Republicans struggle with their conservative tea party faction.

Now it’s Republicans who are amused and making the most of a Democratic split.

Obama’s request for negotiating authority was back on track Thursday after an embarrassing procedural loss Tuesday when only one Democrat voted with the president on a motion to begin debate on trade, even though about a dozen support his overall goal.

Democrats have long been suspicious of trade deals, blaming them for job losses and lax enforcement. Warren and her allies have dug further, building on those concerns to make a case that Obama is negotiating an agreement that is secret from the public, places U.S. sovereignty at risk and could roll back U.S. financial regulations.

“She’s absolutely wrong,” Obama said in an interview with Yahoo! that aired over the weekend. “Elizabeth is a politician like everybody else and she has a voice that she wants to get out there.”

That remark prompted Sen. Sherrod Brown, an Ohio Democrat who has been among Warren’s top allies on the trade issue, to rebuke the president for being “disrespectful.”

“I think that the president has made this more personal than he needed to,” Brown said.

Obama on Thursday sought to defuse the tension between the two, noting that his domestic agenda is virtually the same as hers and that of other liberals, except for trade.

“The issue with respect to myself and Elizabeth has never been personal,” he said during a news conference at the presidential retreat at Camp David, Maryland. “There are a whole bunch of some of my best friends in the Senate as well as in the House, some of my earliest supporters, who disagree with me on this.”

While the Obama-Warren spat highlights the deep Democratic split over trade, the party has healed in the past after major trade fights. Mitch Stewart, a former senior adviser to Obama’s presidential campaigns and now a consultant for a pro-trade advocacy group, predicted the Obama-Warren relationship can survive the disagreement.

This dispute, however, comes at an awkward time for Hillary Rodham Clinton, who as Obama’s secretary of State once called the Trans-Pacific negotiations the “gold standard” for fair trade. Now, as a presidential candidate who feels the pressure of Warren’s national prominence, she is sounding more skeptical and her lack of endorsement has been conspicuous.

A former Harvard professor, Warren burst onto the Washington scene after the 2008 financial crisis as a vigorous advocate for consumer financial protections. She became the chair of a bipartisan Congressional Oversight Panel that kept tabs on the Troubled Asset Relief Program, the taxpayer-financed fund that helped financial institutions out of the crisis.

“Her TARP oversight hearings often felt more like made-for-YouTube inquisitions than serious inquiries,” Geithner wrote in his book “Stress Test.” ”She was worried about the right things, but she was better at impugning our choices — as well as our integrity and our competence — than identifying any feasible alternatives.”

More recently, Warren infuriated the White House by objecting to Obama’s nomination last year of Antonio Weiss, a Lazard investment banker, to be the third-ranking official at Treasury. Warren argued he was too close to Wall Street to hold a high post at Treasury. Weiss dropped out of contention for the post and Obama appointed him to serve as a counselor to Treasury Secretary Jack Lew, a post that does not require Senate confirmation.

The arrangement was not unfamiliar to Warren. She herself did not have Senate votes in 2010 to be confirmed as head of a new Consumer Financial Protection Bureau, so Obama appointed her a special presidential adviser to work with Geithner at Treasury on an interim basis.

A year later, with the help of then-Obama senior adviser Pete Rouse, Warren embarked on her 2012 Senate race. Obama campaigned for her.