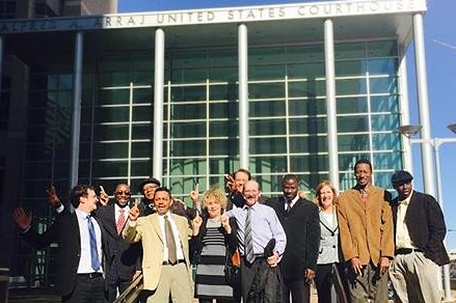 The Denver Post recently reported a group of workers at a Denver warehouse were awarded $15 million dollars as part of a discrimination settlement after being called “lazy, stupid Africans” and “n**gers.”

Seven workers at Matheson Trucking and Matheson Flight Extenders Inc. alleged that they were separated by race and the victims of racial slurs.

Many of the workers emigrated from the African country of Mali, with the exception of a white whistleblower that pushed back against the racist practices.

“I thought I was back South again with the same old racist attitudes,” plaintiff Ernie Duke told the Denver Post.

“Basically, I did the right thing. This isn’t 1960 anymore,” white employee Dean Patricelli, who was called the “tribe’s assistant” and fired for supporting black workers, told the paper.

The trucking company delivers mail for the Postal Service as well as United Parcel Service and FedEx.

“(Matheson) prides itself on hiring and employing a highly diverse workforce consisting of men and women of different races and cultures,” Matheson attorney Stacey Campbell said in a statement to The Denver Post.

Plaintiffs accused the company of separating white and black factory workers inside the warehouse. Not only were blacks taunted with racial slurs by supervisors, but other employees were also allowed to harass the black workers.

Included in the judgment is $318,000 in back pay for employees who were fired, furloughed or had their hours reduced because of their race, said plaintiff attorney Justin Plaskov.

The plaintiffs were all mail handlers at the warehouse and recalled being mocked will racial slurs and called “lazy, stupid Africans.”

“White employees and supervisors often used the N-word when referring to black workers, including an instance when an employee yelled that all blacks should be shot. A supervisor who heard the comment didn’t discipline the white employee, who later was promoted to a supervisory position,”The Denver Post reported.

Station manager Leslie Capra was among the worst offenders, the lawsuit claims.

“Ms. Capra became more openly hostile towards black employees, encouraging the supervisors and leads under her management to do likewise,” the lawsuit says. “Under Ms. Capra’s management, black employees were discriminated against with respect to almost every aspect of their employment.”