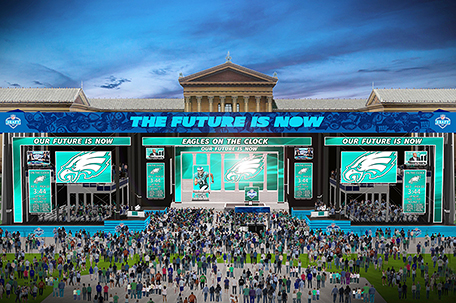 May 12, 2017 Category: Color Of Money Posted by: Philadelphia Sun Staff

When the City of Philadelphia was given the NFL Draft, the contact came with an option for next year. Whether or not that option gets exercised is anyone’s guess.

Now that the remnants of the 2017 National League Football draft and the pageantry connected to it have been cleared from the Benjamin Franklin Parkway, the league — and the City of Philadelphia — have some decisions to make.

When the draft was awarded to the City, the contract created by the league and the Philadelphia Convention and Visitors Bureau gave both parties the option of having the draft here next year.

Were it up to many of the fans themselves, the decision would be a no-brainer. As he stood talking with his friends Shawn Webster of Mt. Airy, Malik Sullivan of Germantown and D.J. Ross of West Philadelphia, Bundy Benton of Germantown said he’d be surprised if it weren’t here next year.

“This is the best city to have it in,” he said, wearing his Dallas Cowboys jersey. “This is a beautiful thing for the city, no matter what your [team] affiliation is. We’re all football fans. Plus, we’ve got the secret weapon, the Parkway. No one can pack it in like us.”

“Outside of the revenue this is going to bring into the city, to me this means that we can stop with the negativity when it comes to how [Eagles] fans treat people who wear another jersey,” Brown said. “I bleed Silver and Black, and nobody’s bothering me. I haven’t heard any negative talk about how anyone has been treated here. It’s been a good experience for everyone…”

“…even that Dallas Cowgirls fan over there…” Brown said, pointing to a fan dressed in a Cowboys jersey to his left.

Seeing an incident-free, three-day event featuring 250,000 joyous football fans, the Benjamin Franklin Parkway, and all the free advertising any city could hope for certainly serves as an incentive, said Larry Needle, Executive Director of PHL Sports.

“We really feel like it was a great success for the city,” he said. “It was so gratifying to see all of the fans having a good time. Philadelphia really shined and it was a fantastic look for the city.”

It is estimated that the City could make as much as $80 million though the Draft, but that impact won’t be known until came through the city’s coffers, even though it’ll be months before the financial impact of the event will be fully calculated, according to the Philadelphia Convention and Visitors Bureau.

One of the things that both the city and the NFL will be asking themselves is “Was this all worth it?”

For some of the residents living near the Parkway and for commuters that use the River Drives to get to and from Manayunk, Bala Cynwyd and Germantown, the closed roads, snarled traffic and sheer volume of the NFL Draft was a bit much.

This impact on Philadelphians can’t and won’t be ignored, Needle said.

“We worked really hard to recognize the human impact of this,” he said. “We’re going to talk to those most effected by this so that if we do hold the Draft next year, it’ll be more seamless.”

Right now, there are 16 cities vying for next year’s NFL Draft, including Dallas. Over the next few weeks, both the NFL and the City will be taking a long look at what went right, what went wrong and whether or not the option to bring the draft back to Philadelphia will be exercised.

If the option gets exercised, it would be music to the ears of Benton and his friends.

“With The First Pick In The Draft…”