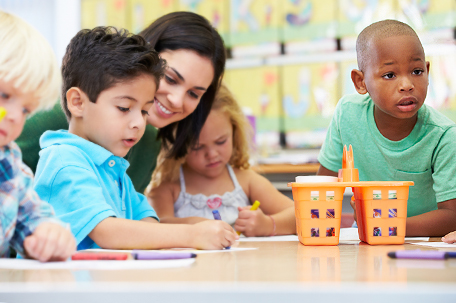 A new report published today by the Center for American Progress found that teachers have lower expectations for students of color and those from high-poverty backgrounds. The report also found that high school students who have teachers with higher expectations were more than three times more likely to graduate from college than their peers.

The idea that people do better when more is expected of them is often described as the “Pygmalion Effect,” and because of the national debate over the Common Core standards, there has been increased focus on the power of expectations in recent months.

The report, titled “The Power of the Pygmalion Effect,” was authored by CAP Senior Fellow Ulrich Boser, Researcher Megan Wilhelm, and Senior Policy Analyst Robert Hanna. It analyzed data from the National Center for Education Statistics’ Education Longitudinal Study, or ELS, which followed the progression of a nationally representative sample of 10th grade students from 2002 to 2012.

Some of the findings of the study include:

•  High school students whose teachers have higher expectations about their future success are far more likely to graduate from college.

•  Secondary teachers have lower expectations for students of color and students from disadvantaged backgrounds.

•  College-preparation programs and other factors that support higher expectations are significant predictors of college graduation rates.

The report also points out that other research suggests that teacher expectations can be more predictive than many other factors in determining whether or not students would complete their education at the secondary, post-secondary, and higher levels.

As previous CAP reports have observed, the population of communities of color will only continue to grow, and students of color already make up almost half of the public school population. The author’s research outlined in this report suggests that policymakers continue to raise expectations for students, and that the Common Core Standards are a powerful way to do so.

“Raising expectations will go a long way to help our children succeed in college—and beyond,” says Boser. “We need to do far more to support the new Common Core standards, which can do a lot to improve learning outcomes for all students.”