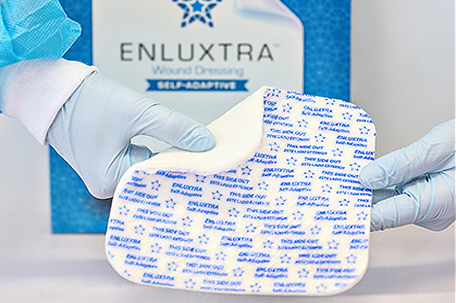 A new wound-care dressing developed by a California firm has been shown to not only reduce the cost of treating wounds, but also to improve the outcomes of those treatments.

That’s good news for diabetics. According to statistics, about 15 percent of those with the disease develop chronic wounds ‘most often foot ulcers’ that can result in amputation.

The Any Wound dressing, crafted of FDA-approved polymers, is designed to sense and accommodate the different parts of the wound that need hydration or absorption, and a single dressing can remain in place for up to seven days.

It is, designers say, ‘the first dressing that is capable of sensing the wound’s need and to act in accordance with it. If a wound or even part of it changes its state while the dressing is on, the dressing will automatically and reversibly change its function at this particular area.’

As part of the study, the Any Wound dressing was used on 547 patients suffering from 1,168 chronic wounds.

According to the results, obtained through patient and caregiver surveys, compared to prior dressings, the Any Wound dressing led to consistently faster wound improvements, decreased dressing change frequency, reduced pain and odor, painless dressing changes, superior drainage management, and prevention of skin maceration.’

According to statistics, about 6.5 million patients in the United States are treated for chronic wounds each year at an estimated annual cost of $25 billion, with figures expected to rise as cases of chronic conditions including type 2 diabetes also rise.

The Enluxtra Any Wound dressing was released in 2012, and has been used by 20,000 patients across the United States.

‘The use of Enluxtra translates into significant cost-savings and successful treatment outcomes,’ said Frost & Sullivan Research Analyst Geethu Roshan Verghese. ‘By addressing the needs of healthcare professionals and patients alike, Enluxtra has effectively bridged vital gaps in the wound-care industry.’

Publisher and Editor-in-Chief Al-Samarrie, was not only born into a family with diabetes, but also married into one. She was propelled at a young age into ‘caretaker mode,’ and with her knowledge of the scarcity of resources, support, and understanding for people with diabetes, co-founded Diabetes Interview’ “which later became Diabetes Health magazine.

Obesity rates improve for some, continue to increase for Black girls, study shows