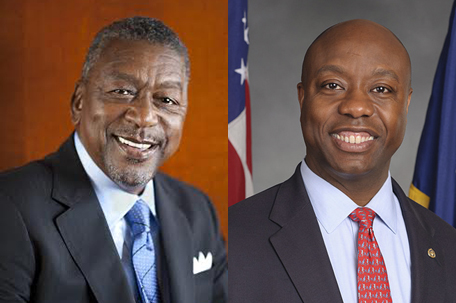 Johnson stated “I want to commend Senator Scott for introducing S. Res. 11 which calls for companies to increase diversity in the workplace and minority business opportunities, through enhanced best practices, by interviewing at least two qualified minority candidates for management positions and at least two qualified minority businesses for vendor contract opportunities prior to making a hiring or contract decision.  Senator Scott continues to lead the charge on this important issue.”

“In light of today’s Newsday article (“Schumer Pressed on Senate Minority Hiring” by Tom Brune), which calls into question why Democrats in the Senate have very few or no minority staffers who hold senior positions working in their offices, I would urge Republicans and Democrats to join Senator Scott in adopting The RLJ Rule. I trust that senate minority leader Charles Schumer (D-NY) will take the lead on behalf of the Democrats, as he suggested in the article, on this important economic issue. I would also encourage President-elect Trump, as we approach the Dr. Martin Luther King, Jr. holiday, to demonstrate his commitment to promoting economic opportunities for minorities by asking the Republican-controlled Congress to adopt Senator Tim Scott’s resolution,” Johnson concluded.

S. Res. 11 can be found at: https://www.congress.gov/115/bills/sres11/BILLS-115sres11is.pdf and is entitled “Encouraging the Development of Best Business Practices to fully Utilize the Potential of the United States.” It was introduced on January 10, 2017, along with Senators Rob Portman (R-OH), Marco Rubio (R-FL), Cory Booker (D-NJ), Rand Paul (R-KY), and Sherrod Brown (D-OH).