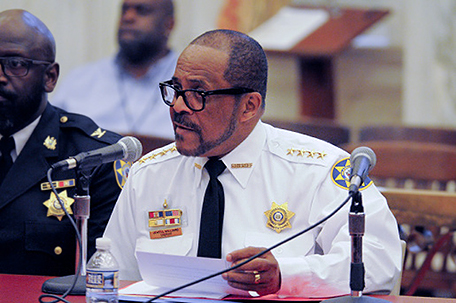 Testifying at City Council budget hearings, Sheriff Jewell Williams described the millions of dollars in new revenues generated by the monthly sheriff’s sales.    The vigorous collection of delinquent real estate taxes through auction has resulted in an additional $60 million per year in taxes and fees that is now forwarded to the City’s general fund.

“In my first year in office, Sheriff’s Sales collected $27 million in delinquent taxes and fees”, said Sheriff Williams. “From three sales a month in 2012, we now conduct six monthly sales, including a land bank sale, and there is evidence that the backlog of delinquent cases is at last shrinking. While we still process more than 27,000 properties a year, the backlog of delinquencies and the amounts collected are getting smaller.”

Of the 27,000 properties processed each year, approximately 7,000 go to a final sale, and processing properties is how a vastly improved operation.  When the Sheriff took office in 2012, it required up to 120 days after settlement for a property to be returned to productive use.  Last year, the time between a property’s sale and the issuance of a new deed was reduced to 15 days.

The office has also dedicated resources to finding people who are owed excess funds from the sale of their property.  After a property is sold, settled and all liabilities and debts have been paid and recorded, the owner of record at the time the court ordered the sale (“defendant”) may recover any excess balance remaining on the account through the Sheriff’s Defendant Asset Recovery Team, also known as DART.

Historically, only a fraction of these excess funds were returned to the previous property owners.  Sheriff Jewell Williams made it a priority when he took office in 2012 to search out those owed money by increasing the efforts of the DART unit. Under his leadership, the unit has been more aggressive in validating which defendants are eligible to receive payment and connecting with those individuals to put a check in their hands.

Last year, DART located 140 people and returned $2.2 million in excess funds to them.  Since 2012, nearly $11 million has been returned to more than 400 people.   If property has been sold at Sheriff’s sale within the past 18 months, former owners can file a claim with the DART unit on the Sheriff’s website, http://www.officeofphiladelphiasheriff.com/en/real-estate/dart.

The Sheriff’s office has also continued its robust efforts to educate the public on services it provides through workshops, seminars, and events all across the city.

Other highlights of the Sheriff’s testimony to Council included: